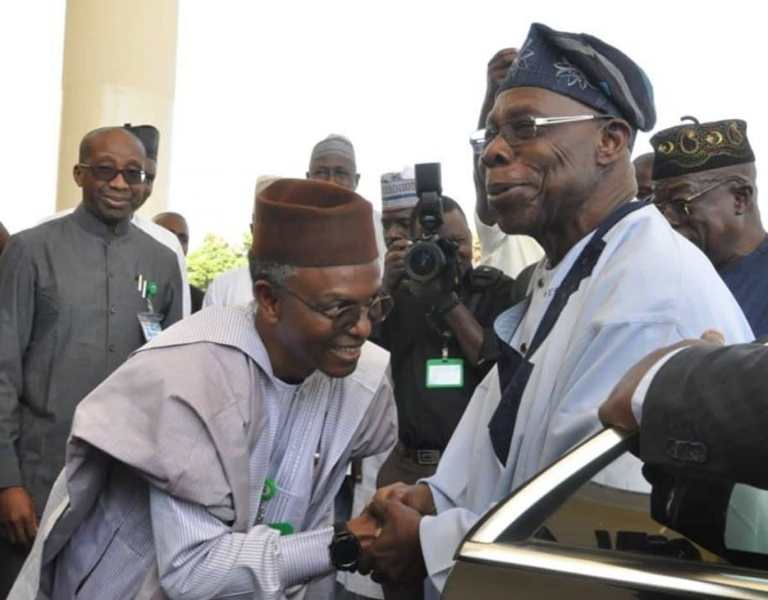 Former President Olusegun Obasanjo has commended Gov. Nasiru El-Rufai for his pan-Nigeria character and his commitment to good governance.

The former president who was in Kaduna on a private visit, said when he visited the governor on Wednesday, that he was happy with El-Rufai’s approach to governance especially in giving opportunities to women.

According to Obasanjo, the governor’s cabinet reflects a mini Nigeria and has been striving to restore the past glory of Kaduna as a melting point of all Nigerians.

The former president recalled that El Rufai, who served under his administration as Minister of FCT, was “one of the best persons to work with, he is a near genius.”

“We need a character like this, a man that you know where you stand with him.

“Any job given to him will be well done,’’ Obasanjo said, adding that the people of Kaduna state now “have a good leader to work with.”

The former president described his visit as a home coming, saying he built his first house at the Makera area of Kaduna when served at the Mogadishu Army Battalion between 1959 and 1967.

Responding, El Rufai described Obasanjo as a mentor, adding that he learnt many public service skills from him when he served in his government as minister.(NAN)