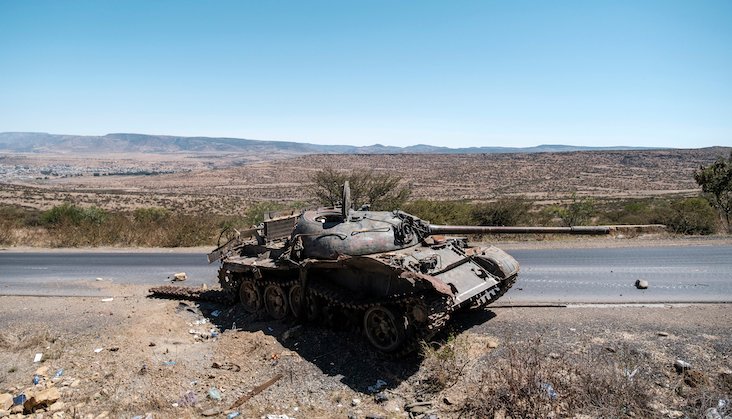 Hopes for a negotiated settlement – which have been stalled for weeks – are now dwindling.

Positions on both sides have hardened say analysts, with intractable problems emerging.

In particular, the Tigray position has been to demand the return of Western Tigray, currently under control of Amhara groups who believe the area historically belongs to them.

On the government’s side, there has been a refusal to restart basic services including banking.

Searching for an effective mediator

“With the parties split on whether Kenya’s govt or the AU’s Obasanjo leads the mediation, the failure to even convene formal discussions means none of the underlying issues have been addressed that led to war in the first place and have got more serious during the conflict”, he writes on Twitter.

In an opinion piece, Tigray communications leader Getachew Reda criticised the AU’s role in negotiating a lasting ceasefire. “The AU, under the leadership of Moussa Faki Mahamat, has become an apologist for a brutal regime seeking to starve and bomb its own people into submission.

Both sides blame the other for the violence.

“At 5am today (the TPLF) has attacked on the Eastern Front; from Bisober, Zobel and Tekulshe direction. By carrying out such measure, it has effectively broken the ceasefire”, said a government communications service.

In an email this morning, Tigray military spokespeople said: “Tigray’s Military Command would like to make it clear that, if the enemy does not stop the offensive it has begun based on a previously known attack plan, Tigray’s Army is reliably ready to repulse this offensive, and transition into a counteroffensive to liberate occupied sovereign Tigrayan territory and return our displaced people to their homes.”