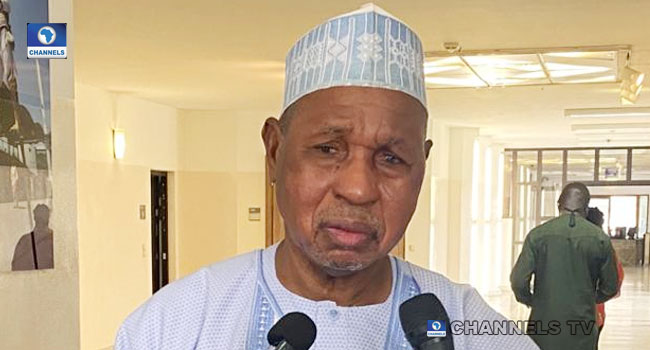 There were media reports that the former Lagos state governor met with some PDP stakeholders under the leadership of Governor Wike.

The meeting, according to Masari, was a confirmation that the governor would work for the APC standard bearer during the 2023 presidential election.

Wike, a Peoples Democratic Party (PDP) governor, is currently at loggerheads with his party after losing at the presidential primary.

Further to this, efforts by the Wike group to get the vice presidential slot also failed as the PDP flagbearer , former Vice President Atiku Abubakar picked Delta state Governor Ifenayi Okowa as his running mate.

Efforts by the party to reconcile with Wike have continued to fail, as his group insisted the PDP national chairman, Senator Iyorchia Ayu, must go to allow for a southerner to step in as the party’s chair.

They argued that since Atiku, a northerner emerged as the party’s presidential candidate, it’s only fair that Ayu, another northerner, should quit for equity and balancing.

Although the party appears in a quagmire, but the duo of Ayu and Bauchi state Governor Abdulkadir Bala Mohammed said there’s no cause for alarm.

Masari who spoke from London Wednesday, told the BBC Hausa Service that it’s true Tinubu met Wike and they would continue to meet in due course.

“The meeting was basically on the 2023 Presidential election and by God’s grace, we are going to work with His Excellency, Governor Nyesom Wike ,he will assist and we are going to win the election with ease, by the will of God,” Masari said.

On whether Wike intended joining the ruling party to properly assist Tinubu win the election, the party chieftain said he was not in the position to speak on that.

He, however, said the governor must not necessarily leave the major opposition party before supporting his choice candidate.

The party chieftain said: “This is because Wike is a big politician, a Governor and he has control in some other states apart from his state. He is good to the people and has associated with his people peacefully. By the grace of God, he will be of help to us.”

On whether the new political romance would last since Atiku’s camp was  still pacifying Wike, Masari  said:  “Well, only God knows what would happen next. But what we are seeing now, what has transpired is that we are going to work with Wike and he will be useful to us.

” If you could remember, it was APC that caused the failure of APC in Bauchi, it was members of the party that led to the defeat of the Governor from their own party. In Adamawa too. So, what I want people to understand, someone can still assist you even without joining your party if he wants to.

“Furthermore, with the widespread acceptance of His Excellency Bola Ahmed Tinubu to Nigerians, I can assure you by the will of God he is going to win the election, with or without help. But there is the Hausa adage which says even if you’re beautiful, you should add to it by taking bath. So, it’s not only about Wike, we are also talking with many other Governors.”

Asked if Wike’s support won’t putting former minister of transport, Rotimi Amaechi in abeyance, Masari said: “Nobody will do anything that will hurt Rotimi Amaechi. He is a party member, a formidable member of the APC.”

In a related development, President Muhammadu Buhari has promised to support only the APC candidates and that nobody would be treated as favourite of the Aso Villa during the 2023 general elections.

A statement from the Presidency issued Wednesday by the Senior Special Assistant on Media and Publicity, Malam Garba Shehu, said: “The presidency wishes to put it on record, and at the same time, reassure faithful party members that President Muhammadu Buhari remains a “disciplined soldier” of the All Progressives Congress, APC, and will, in all the coming elections, support only those candidates fielded by the party and no other.”

“This is a warning to decamped party members and some others who are still in court against official candidates of the APC that they are on their own and nobody outside the party tent should link what they are doing to President Buhari.

“The President wishes to be quoted as saying that he is the “occupant of the high office of the President by the Grace of God who used the instrumentality of the APC to bring him to power with a historic verdict in 2015.

“In 2019, he was returned with a bigger majority. For the first time, a non-PDP government came to power with a huge majority after 16 years of the Fourth Republic. His constant refrain is: “I will not betray or undermine my party by supporting candidates other than those of the APC.

“This statement is not against any particular candidate. However, our stand is clear that only those candidates fielded by the All Progressives Candidates, APC will enjoy the support of the President and they are the ones he will campaign for. However, we welcome support for our candidates at all levels by other parties.

“The President says he will continue to support the party at all levels to enforce discipline, synchronization and coordination.

“He also directs officials in and around the Presidential Villa and all those engaging in loose talk to resist making controversial statements that eventually end up hurting the party and the government, thereby providing a weapon for the opposition to use against the administration, the party or its candidates in the coming elections.”

No cause for alarm – PDP

Notwithstanding the ongoing politicking and the crisis rocking the PDP,  the duo of Senator Ayu and Governor Mohammed described the mood in the party ahead of the 2023 election as excellent.

They stated this after the National Working Committee (NWC) with governorship candidates of the party across the 36 states of the federation Wednesday in Abuja.

Ayu, who disclosed that the candidates came to express their concerns in their various states, said they also briefed the party leadership on the effort they were making to ensure victory in the 2023 elections.

“I am very happy with the progress that is made so far in various states and some of the little issues that we have clarified, and it was an extremely useful meeting. So, we are happy that the members of the party are very determined that we don’t just win at the national level, States House of  Assembly, National Assembly, state governorship, we want to return about 25 state governors or more as we used to have. So, the mood in the party is excellent.”

He said: “We believe in the supremacy and sanctity of the party and he has already told you that the mood is very excellent. The candidates are coming together uniting the party to discuss, even issues of reconciliation.”

Asked about the reported meeting between Tinubu, Wike and some PDP leaders, Mohammed said: “I am not aware of the meeting between other party members and governor Wike.”

In his brief remarks, the PDP governorship candidate in Kaduna state, Alhaji Isa Mohammed Ashiru, said there was no crisis in the PDP.

“We are here on a consultative meeting with our leaders on the way forward and we have extended discussions and views, regarding the 2023 elections and we are home and dry,” he noted.

When asked about the crisis rocking the party, Ashiru said: “We don’t have crisis in PDP. I don’t know where you got this information.”

In a related development, the APC governorship candidate in Kaduna state, Senator Uba Sani has called for issue-based campaigns.

Speaking Wednesday while launching Uba Sani Ambassadors (USA), a support group for his candidacy in Kaduna, the lawmaker said, “campaign of calumny, hate speech or insults will not help Nigeria.

Rather, campaigns laced with critical issues as they affect Nigeria and Nigerians and the candidates’ suggestions of way forward is what will assist the electorates in understanding what the various candidates have for them and how they intend to drive the state forward.”

The APC candidate urged party supporters and residents to interrogate the candidates’ agenda on education, health, infrastructure and human capital development among others.

Sani said: “I want to thank the support group for doing a lot. You guys are doing a lot. I want to make it clear here that since the inception of this group, none of us, either myself or anybody from my campaign team has supported them with one kobo and that is why I believe in their conviction, their commitment, and their support.

“Most of the leading candidates represent their districts. I want all of you to ask us about our achievements. What we have done for you people. It is not the politics of saying I will do this or that but the politics of what have you done. Have you ever asked your representatives what they have contributed to healthcare services, education, infrastructure, and human capital development sectors of the economy?”

In his remarks, chairman of the support group, Musa Ibrahim Zamzam, promised to mobilise 1.3 million votes for the APC guber flagbearer during the election, leveraging the capacity and capability of other members of the group in their respective local government areas.