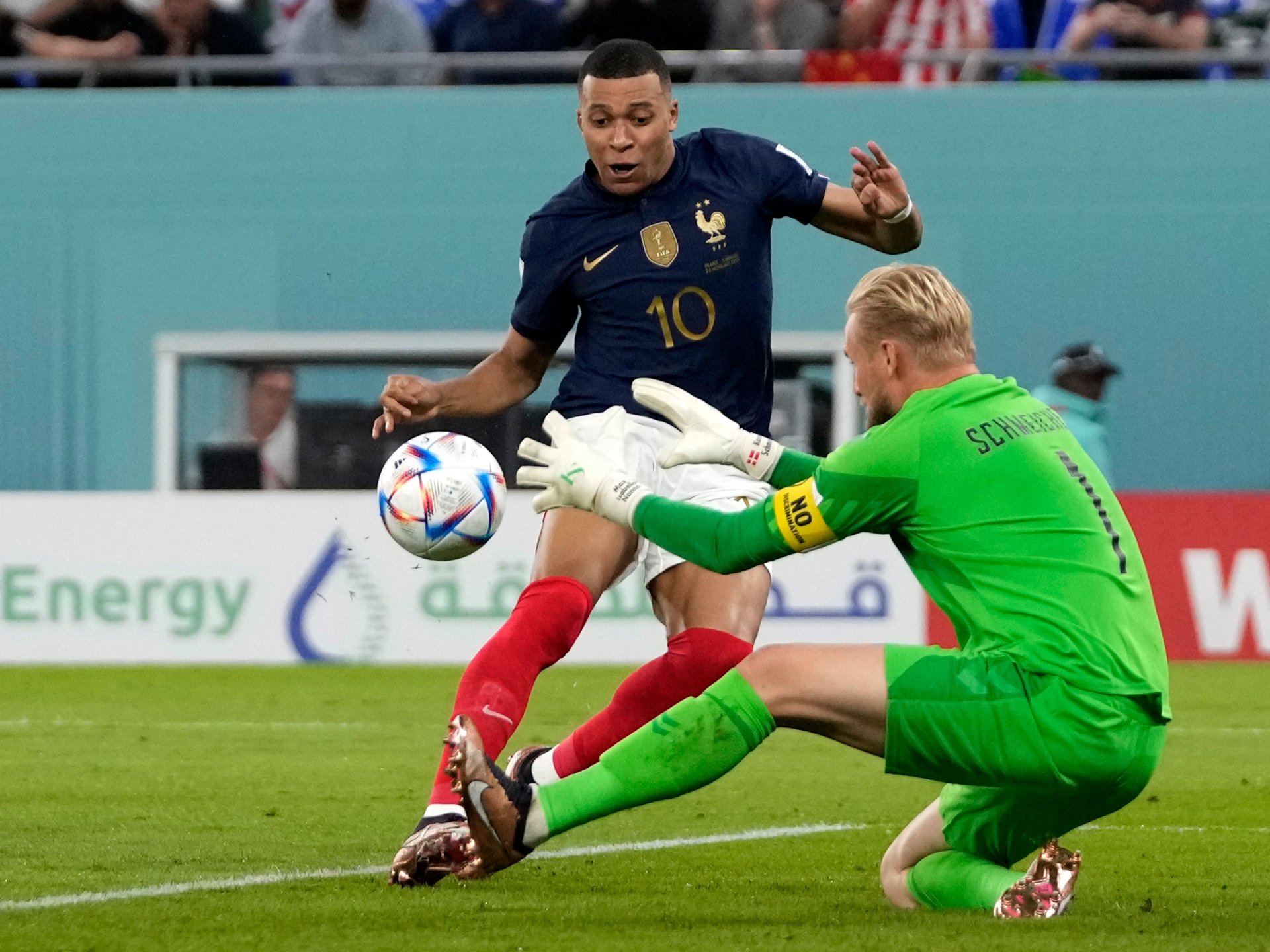 Kylian Mbappe scores twice as France become the first team to qualify for the Round of 16 at the World Cup.

Kylian Mbappe scored twice as France became the first team to book their spot in the knockout stages of the World Cup as they beat Denmark 2-1 on Saturday.

Mbappe put the French ahead after an hour, but the lead was cancelled out by Andreas Christensen’s equaliser just seven minutes later.

Mbappe finished the job in the 86th minute, converting on a cross from Antoine Griezmann and bundling the ball into the back of the net with his thigh.

With this result, world champions France have six points at the top of Group D and are the first team to guarantee their place in the Round of 16.

Having scored four during France’s victorious 2018 campaign and one against Australia, Mbappe now has seven goals in nine World Cup appearances.

Didier Deschamps now has the luxury of leading his team into their final group game against Tunisia knowing a draw would guarantee them top spot, and even a defeat may not prevent them finishing first.

Having come roaring back to batter Australia 4-1 in their opening match in Qatar, France were more wasteful in front of goal on this occasion but at least they did not come unstuck against opponents who have caused them problems before.

They were reigning champions when a defeat to the Danes knocked them out of the 2002 World Cup, while the sides played out their only goalless draw in 2018.

More recently, Kasper Hjulmand’s side beat France home and away in this year’s UEFA Nations League, though Deschamps appears to have learned his lessons from those two encounters.

Deschamps changed three of his back four, with Theo Hernandez at left-back in place of his injured elder brother Lucas and Raphael Varane coming in for his first game in over a month.

But the French attack was untouched from the Australia game.

If Olivier Giroud took the headlines then, here Ousmane Dembele was electric at times on the right, Griezmann excelled in an advanced midfield role, and Mbappe made the difference.

France’s pace, power and passing were all too sharp for the Euro 2020 semi-finalists who were lucky to go in level at half-time.

There were some French appeals for a red card in the 19th minute when Mbappe burst onto a beautiful threaded through ball by Griezmann only to be hauled down by Christensen, but the Danish defender escaped with a yellow.

The holders’ best chances in the first half came from headers by Varane and Adrien Rabiot, but when Mbappe turned away from Joachim Andersen just before the hour mark and accelerated away, it was a sign that a goal was coming.

His shot was turned behind by Kasper Schmeichel, and Griezmann then wasted a great chance shortly after, but in the 61st minute Mbappe did score.

The Paris Saint-Germain superstar linked up brilliantly with Hernandez on the left and met his teammate’s cutback with a shot that beat Schmeichel thanks to a deflection off Christensen.

Denmark had offered little but suddenly they were level midway through the second half as Andersen nodded down a corner and his fellow defender Christensen headed home.

Hugo Lloris was then forced into a key save to deny Jesper Lindstrom and Martin Braithwaite grazed a post as Denmark threatened to turn the game completely on its head.

That would have been extremely harsh on France, even if they could only really have themselves to blame for not making more of their chances.

But Mbappe was not to be denied as he stole in front of Rasmus Kristensen at the back post with four minutes left to meet Griezmann’s cross with his thigh for his 31st international goal.