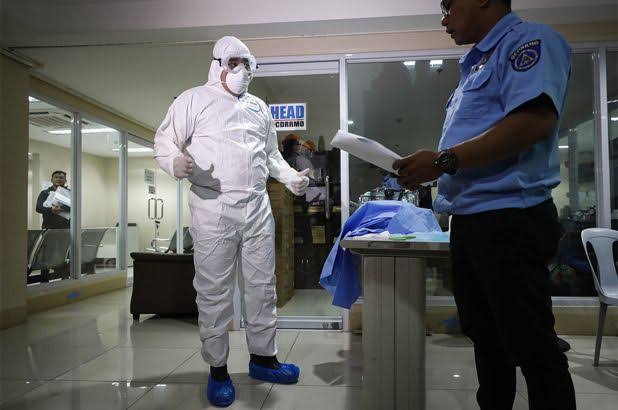 The Philippines on Sunday reported the first death from coronavirus outside of China as the number of fatalities domestically topped 300.

The patient, a 44-year-old Chinese man, died on Saturday in the Philippines after being confined since Jan. 25, Health Secretary Francisco Duque said.

The man is the companion of the first case of the virus in the Philippines, a 38-year-old Chinese woman.

“Over the course of the patient’s admission, he developed severe pneumonia,” Duque told a news conference.

“In his last few days, the patient was stable and showed signs of improvement, however, the condition of the patient deteriorated within his last 24 hours resulting in his demise,” he added.

The couple, both from Wuhan, China, arrived in the Philippines from Hong Kong on Jan. 21.

They are the only confirmed cases in the Philippines so far.

More than 100 people have fallen ill with the virus in about two dozen countries across the globe.

On Thursday, the World Health Organisation (WHO) declared the outbreak a global emergency.

The death in the Philippines came as China saw a sharp rise in domestic fatalities on Sunday as official statistics put the number of deaths at 304, up from 259 a day earlier.

Confirmed cases of the virus rose to 14,380, according to state media, with the majority of new cases in Hubei, the central Chinese province where the virus first broke out in December.

The virus has been spreading in China despite strict measures aimed at halting it, including travel bans between provinces and quarantines in a dozen cities.

International travel companies and national governments have taken steps to stop the spread of the virus as cases continue to be reported in new countries.

Hundreds of flights to and from mainland China have been cancelled including those run by Air Canada, Lufthansa, British Airways Turkish Airlines, United, American Airlines, KLM, Air France, Qantas, and Delta.

Germany, Turkey, and the U.S. are among countries that have sent planes to evacuate their citizens from Wuhan, the city where the outbreak started in December.

The U.S., Australia, and New Zealand have imposed temporary entry bans on foreigners who have travelled through China.

Russia announced the closure of its land border with China earlier in the week, following similar steps to some of China’s other neighbours.

Hong Kong’s authorities, however, have said they would not close the border with the Chinese mainland on Sunday, despite calls for crossings to be closed.

The territory’s government said in a statement by email they had “spared no effort” in implementing measures to reduce the flow of people into Hong Kong from the mainland but would not shut the border.

The statement came a day after members of Hospital Authority Employees Alliance, a newly formed union for health professionals, voted to strike to pressure the government into further action to stop the virus spreading. (dpa/NAN)