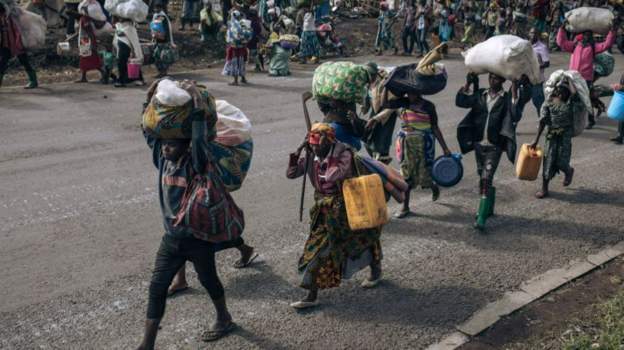 Fresh fighting has erupted in eastern Democratic Republic of Congo, despite an agreement between the government and rebel groups to end hostilities.

The fighting between the army and M23 rebels on Tuesday is said to have caused many people to flee their homes, according to local reports.

“There is mass displacement towards the town of Mweso,” a local journalist told the BBC on Tuesday morning.

The military has not commented on the latest fighting, but a spokesman for the rebels accused government forces of attacking their positions as they prepared to further withdraw as outlined in an agreement reached in Angola’s capital, Luanda.

Last week in Davos President Félix Tshisekedi said the rebel group was not withdrawing but “moving around and redeploying to other areas”.

The rebels have accused President Tshisekedi of being more keen on “destroying the M23” instead of peacefully resolving the The UN says more than 400,000 people have fled their homes in the conflict since last year.