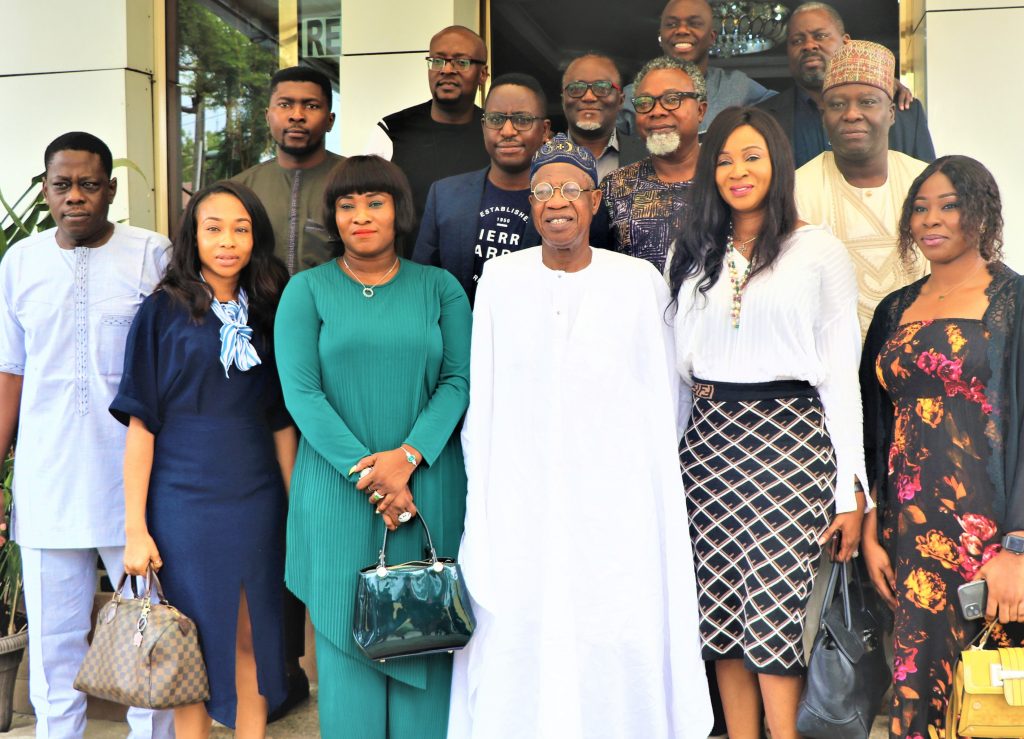 The Federal Government is set to reform the broadcast industry to benefit stakeholders as it will soon forward an Executive Bill to the National Assembly.

The Minister of Information and Culture, Alhaji Lai Mohammed, who disclosed this  at a meeting with FILMIC in Lagos on Friday, said the process for the amendment of the National Broadcasting Commission (NBC) Act has also begun.

FILMIC is an association of movie producers, theatre directors,  content producers and other creative industry practitioners led  by Mahmood Alli-Balogun and Obi Arzika.

The minister said he was reliably informed by the Acting Director General  of the NBC, Prof. Armstrong Idachaba, who was also at the meeting, that in two weeks, there would be a stakeholder Validation Conference to endorse the new initiatives in the industry,.

He said, after the conference, the  necessary amendments to the Broadcasting Code on Monopoly and Anti-Competition, unwholesome content on social media and other amendments will be published for the public and the industry.

The minister said that the  NBC board has also received the approved recommendations and is in the process of implementation of welfare of workers which is part of the reformed process.

Mohammed, who stressed that the reform is not a fluke, challenged the group and other stakeholders, to continue to cooperate with the industry regulator in order to ensure a faithful implementation of the recommendations.

“The government has shown good faith on the reform of the broadcast industry in order to place it on a good stead to achieve its full potentials.

“This is achievable, if all hands are on deck,” he said.

Mohammed recalled that the reform of the broadcast industry kick-started about a year ago the unprofessional and unethical conduct of some broadcast stations, especially before and during the last general elections.

He said after a deliberation by the Federal Executive Council, President Muhammadu Buhari directed him to institute an inquiry into the conduct of the stations and report back to Council.

Mohammed recalled that he inaugurated a five-member committee which recommended measures that could strengthen the NBC’s regulatory role and make it more effective.

He highlighted the recommendations to include Independence of the NBC from political interference in the exercise of its regulatory powers, particularly with respect to the issuance and withdrawal of broadcasting license.

A review of the National Broadcasting Code and extant broadcasting laws to reflect an upward review of fines from N500,000 to N5 million for breaches relating to hate speeches, inciting comments and indecency

Willful repeat of infractions on three occasions after levying fine on a station to attract suspension of license.

The recommendations included the upgrade of breach of political comments relating to hate speeches and divisive comments to ”Class A” offence in the Broadcasting Code.

The NBC Act is also to be amended to enable NBC license WebTV and radio stations, including foreign broadcasters beaming signals into Nigeria.

The amendment also included the provisions for NBC to control monopoly and anti-competitive practices in the industry,

The NBC is to recruit more monitoring members of staff, deploy adequate monitoring equipment and technologies and enhance welfare packages of workers to guard against compromise in the line of duty.

Ali-Balogun, thanked the Minister for the implementation of policies aimed at revolutionising the creative industry and unlocking its huge potentials for wealth creation and employment generation.

“With what you have done, Honourable Minister, I think we can begin to sing ‘Uhuru’ because as content producers, we have been at the mercy of the other people in the value chain,” he said.

On his part, Arzika said with the unfolding of the new policies in the broadcasting industry, no fewer than 50 new viable channels could be floated within the next few years, thereby creating jobs for the teeming youths.