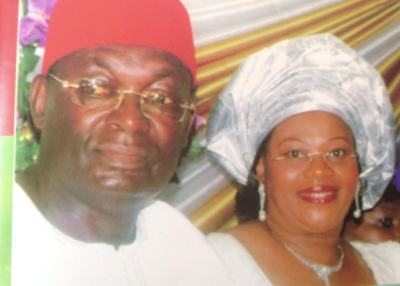 Chike Akunyili was murdered by unknown gunmen on Tuesday in Anambra State. His killing further exposes the troubling mayhem in the Southeast region of Nigeria.

Until his death, Akunyili was running St Leo’s Hospital, one of the biggest in Enugu. He graduated first class and spent his professional career treating citizens across the country, including many on charitable grounds.

“He was travelling along the Old Onitsha Enugu Highway when they struck,” a family said under anonymity because he was not asked to publicly comment on the matter until a formal statement has been issued.

– He married Dora Nkem Akunyili many years ago, with whom he had six children and several grandchildren. Their children are Ijeoma, Edozie, Somto, Njideka, Chidiogo and Obumneme.

– Chike Akunyili accompanied Dora to India for treatment of endometrial carcinoma, a disease which sadly later claimed her life in 2014, aged 59.

– The Akunyili family won an American lottery many years ago and received the US Green Card, but according to Chike Akunyili, officials of that country wanted to make his wife a citizen but “she vehemently refused, insisting that nothing would take her out of her home country on a permanent basis”.

– Mr Akunyili until his killing, was running St Leo’s Hospital, one of the biggest in Enugu State.

– He is into charity.

– He is a physician.

– He supported his wife’s pharmacology studies.