AFRICAN UNITY AND PEACE CAN ONLY BE ACHIVED THROUGH INTERNATIONAL TRADE, INVESTMENT AND REGIONAL ECONOMIC INTEGRATION AGREEMENTS PARTICULARY AfCFTA 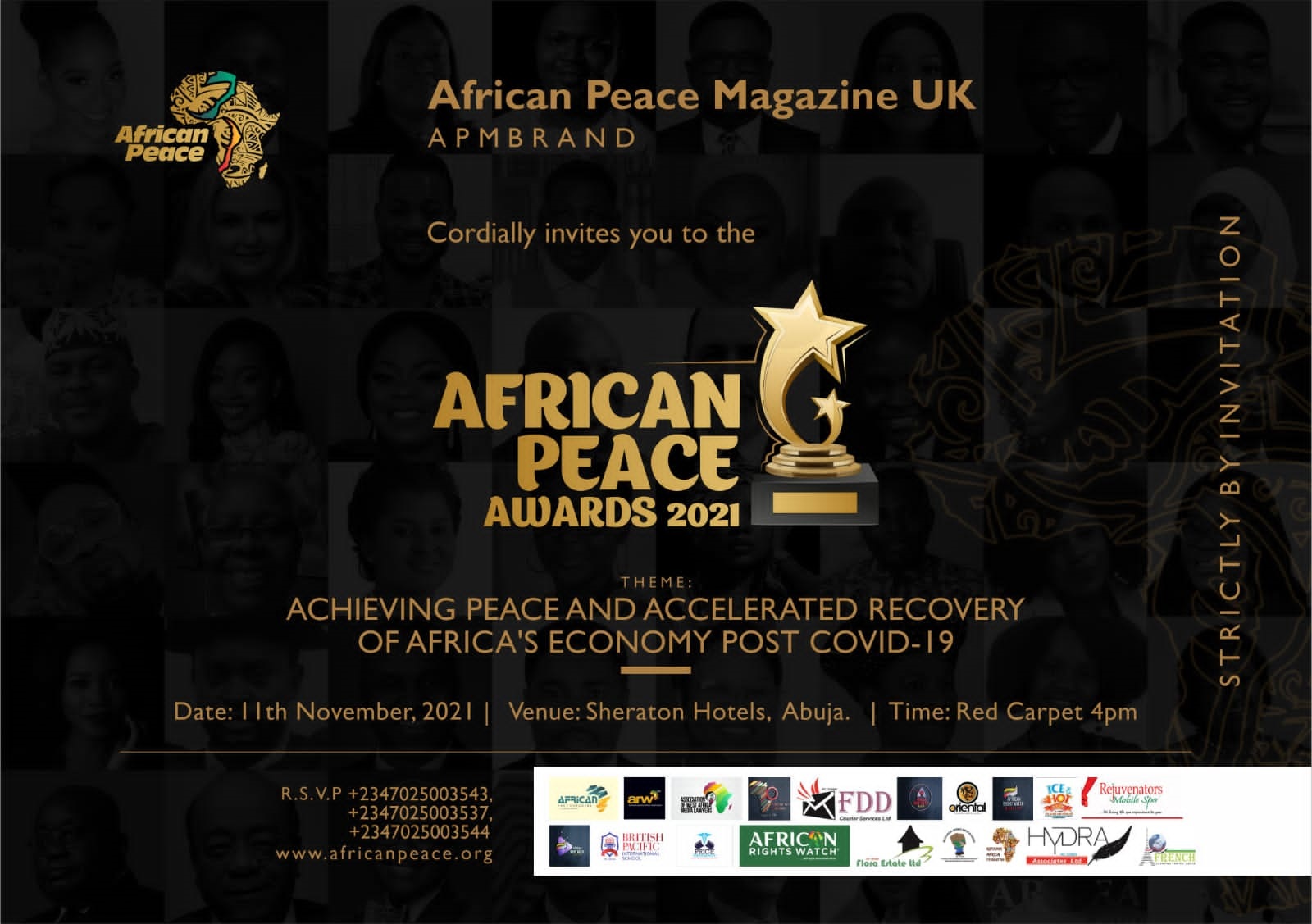 INVITATION TO PARTICIPATE IN THE AFRICAN PEACE AWARDS

According to Mwalimu Julius Nyerere “Africa peace, unity and people-centered development are inextricably … You can’t have peace, in any country, in my view, without justice”

How can you achieve unity and people centered development with seamless integration. One important African proverb to keep in mind is “Sticks in a bundle are unbreakable”. This proverb simply translates that unity makes a community stronger

Many writers and studies have suggested that African governments will have to provide efficient agriculture, housing, transportation, medical and logistics services if they are to assuage the restless population. African despite spirited effort has not been able to enjoy seamless integration, as has been achieved in Europe making peaceextremely elusive in most part of the continent.African continent remains fragmented due to poor physical and digital connectivity, resulting into a complex and difficult task of integrating unequal partners with the following profile:

Many writers estimated that by 2050, Africa is projected to house more than 2.2 billion people, making up over half of global population growth. This estimation begs the question of how propriety and peace can be achieved in the continent.

One important factor to note is that the connection between peace and economic development is unarguable. Most Intra-African trade in goods is transported by road:- transport costs contribute as much as 40% to the final price of traded goods. If peace keeping or conflict cannot be managed it will surely affect trade because absence of peace introduces insecurity which introduces distrust in the African community by its global trade partners.

As at 13 January 2021, WTO/International Trade Statistics reveal, that the share of Intra-regional trade in services is very low in Africa (only 7%) even if it comprises more than 50 economies. The share, in contrast, is highest in Europe and Asia by 63% and 53% respectively,

Africa relies on Seaborne Trade, as about 90% of all African Trade is conducted by sea mostly via 90 major ports (which often serve the entire regional economic interests of neighboring countries, as 16 of Africa’s 55 states are landlocked. Eg South African ports like that of Durban, serve the economies of the whole Southern African region.

The fact that intra-African Trade accounts for only 15%, compared to about 47% in America, 61% in Asia and 67% in EU and its global share of manufacturing exports (less than 1%) underscores the shallowness of regional economic integration in Africa.

In Africa, Non-Tariff barriers (including divergent and unharmonized regulatory regimes in key infrastructure services and other services sectors) are more significant barriers than tariffs.

In an article published by the Organization for Economic Co-operational and Development (OECD) on the 7th of May 2020,the disastrous impact of the Corona Virus pandemic on Africa’s Economy was discussed. It stated that the Pandemic affected Africa’s Economy in three waves (i) Lower trade and Investment from China (ii) a demand slump associated with the lockdowns in the European Union and OECD Countries and (iii) a continental supply shock affecting domestic and intra-African Trade. The OECD in that article advised that African leaders re-assess the tradeoffs between short, medium and long term priorities

In another article published by the Wiley online Library, it was confirmed that as the pandemic accelerated, the Socioeconomic Damage increased in Africa. Measures deployed by governments to contain its spreadcaused severe socioeconomic dislocations. It points out that Many African governments responded with programs to mitigate personal hardship and disruptions to economic life.

Also, the effect of the pandemic with regards to peace promotion and keeping in Africa was disastrous. Whilst the pandemic did not necessary worsen the conflict landscape, it proved to be distracting seeing as it prevented organizations, institutions and governments from keepingand promoting peace.

One of the notable observations of the African Peace Magazine during the pandemic was that the pandemic gave great advantage to many people especially persons in government power who sought to tightenthe grip, access, power and control in the government.

To face its reality, and create a future it can be proud of, African must begin addressing its challenges now, and today. African governments must wake up to the reality of its growing population while employing sustainable means to seek economic growth through collaboration with relevant institutions. Only by doing this can the African narrative of hunger and poverty begin to change, ever so gradually.

Clearly, the Agreement on AfCFTA represents a unique collaborative effort by African countries to bolster regional and economic integration, by among other things, increasing intra- African trade and investments, as well as deepening economic relationships by negotiating under phase 2, investment, competition and intellectual property rights protocols (hopefully by the end of 2021, in the best interest of all).

The African Peace Magazine UK, in conjunction with her strategic partners, Rethink Africa Foundation, African Fact Checkers, Centre for peace and Conflictmanagement in Africa and African Right Watch bring to you a celebration of the unique AfCFTAmilestones, while drawing attention to the task ahead and how AfCFTA can be the key to unity and Peace in the continent post Covid 19.

The African Peace awards seeks to honor persons, institutions, organization, governments etc whose actions, and efforts have in one way improved or contributed to peacekeeping and conflict management in Africa as well as improving the lives of Africans.

The African Peace brand has noted Peace promotion and conflict management in any society alleviates uncertainly and risk which in turn promotes economic growth in any given community. It contributes to the economic growth of the community by increasing the productivity in capital and labour as well as good governance.

The African peace brand introduces its awards in the hopes of promoting peace globally and specifically in Africa with the hope of effecting change in Africa first and thenglobally.

In a time of intense global conflict, peace has become an elusive issue, we invite you to join us and contribute further towards a more peaceful world and Africa in particular. It’s a further call to serve humanity.

You can also nominate yourself

African Peace Magazine is a magazine aimed at uplifting the values of peace and unity throughout the continent. It condemns violence and acknowledges those who strive to make the strife disappear. It features pieces, articles and write-ups which go a long way in promoting this noble cause of peace. We at African Peace Magazine believe relative peace can be achieved if the right steps are taken towards tackling seeds of discord. African Peace magazine is a monthly publication aimed at providing essential awareness to conflict infested areas. Working in strategic partnership with the Centre for Peace and Conflict Management in Africa and Foundation for Peace and Development in Africa established by Mr EdemKodjo, former Secretary General of OAU ( Organization of African Unity now African Union),and former Prime Minister of the Togolese Republic, and so many other organizations / groups towards ensuring a peaceful continent.

African Peace Magazine is a voluntary, non-religious, non-political and non-governmental organization born out of the desire and passion of some personalities who had witnessed the end result of conflicts and crisis and made up their mind to help the continent to provide solution to the unpleasant and unbearable agonies of conflict here and there in Africa.

The Magazine is published in the United Arab Emirate (Dubai) by African Peace Magazine Ltd UK. We are registered in Nigeria, South Africa, Kenya, Tanzania and London UK.

Thanks in anticipation of your response.

“Whenever you are confronted with an opponent. Conquer him with love.”