‘Everything Is Gone’: South Africa’s Flood Victims Search For Shelter 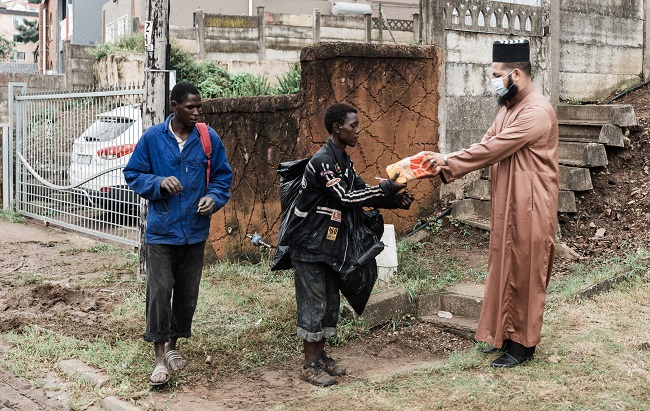 Disoriented and in disbelief but alive, a crowd of people who watched their homes wash away amid devastating floods in South Africa’s coastal city of Durban queued to register for temporary shelter Wednesday.

“Everything is gone,” repeated Sinethemba Duka, 31, over and over, sporting a grey floppy hat and a salmon coloured golf shirt — having salvaged only a few pieces of clothing.

More than 300 people have been killed since rains, the heaviest in six decades, wreaked havoc on the city and surrounding region at the weekend, destroying homes and infrastructure.

Officials have declared it “one of the worst weather storms in the history of our country”.

At the storm’s peak, the South African Weather Service said more than 300 mm of rain fell within a 24-hour period in some regions.

Duka and dozens of others crowded around him Wednesday evening, were residents of the Mega Village informal settlement, or shack dwellings,south of Durban’s central business district.

Residents said most homes in the area were made of corrugated iron and wooden boards — not nearly strong enough to withstand rushing waters.

Returning home from work as a street hawker on Monday, Duka said he found himself knee-deep in water. “I was scared,” he said.

Mud and rain continued to rise for 30 minutes, forcing him to make a run for it, he said.

“The water then comes on top of my roof… and then the roof goes and then walls fell down,” he said, gesturing up and over with his hand.

– ‘Not enough space’ –
But it was volunteers helping Duka and his neighbours, who included mothers carrying infants, youth and the elderly.

In a pitch dark hall, under a cellphone torch light, one volunteer writes names in a book.

“We are just helping the people because we care,” said Mabheki Sokhela, 51, who helped organise temporary shelter at a community hall.

“These are our brothers and sisters”

Sokhela lives in Glebelands hostels — one of a series of crowded apartment blocks in Umlazi, a township of Durban. He rallied his fellow residents to agree to give shelter to the flood victims in the building.

“We are trying to accommodate these people. There is not enough space,” he said.

Many would be sleeping on chairs or on cardboard on the floors of the building, he said.

Volunteers have been desperate to find food, clothes and other supplies for the flood victims.

The destroyed infrastructure from downed mobile networks to collapsed roads and bridges have made accessing supplies a challenge, Sokhela said.

A general view of a crack in the road following heavy rains and winds in Durban, on April 12, 2022. – At least five people have been killed in floods and mudslides across South Africa’s port city of Durban following heavy rains in recent days.
Days of rains have flooded several areas and shut dozens of roads across the city (Photo by PHILL MAGAKOE / AFP)

Mudslides have buried parts of highways leading into the city. The main thoroughfare connecting Umlazi to the city centre and, critically, the port was lined with now-twisted and overturned shipping containers swept up by a swollen river.

Sokhela said he was optimistic help would come within days as excavators and other equipment had begun to appear on roads in the area on Wednesday.

The South African Weather Service said the tropical storm had passed, but localised rainfall could be expected before the weekend.

Despite dark clouds still hanging over the city, Sokhela said he couldn’t imagine more rain. The hostels in Umlazi were without electricity Wednesday and as night approached, flood victims were left registering in the dark.

If it rains again, Sokhela said, “there can be more people like this.”