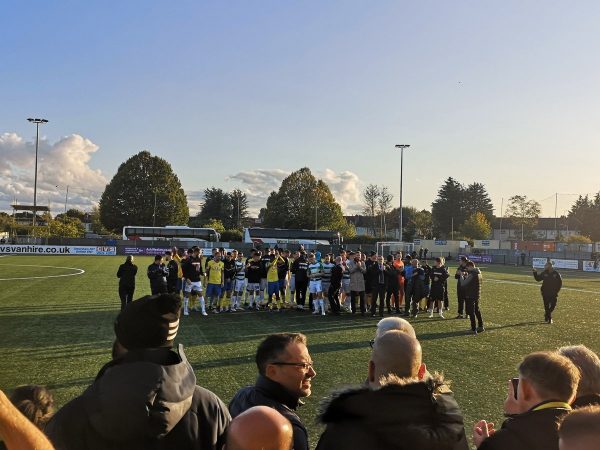 An FA Cup qualifying match between Haringey Borough and Yeovil Town was abandoned on Saturday after allegations that players were racially abused and spat on.

The players of seventh-tier outfit Haringey walked off the field with about 25 minutes to go, shortly after Yeovil had scored a penalty.

The incident during the match in the fourth qualifying round came just five days after England players endured racist abuse during their Euro 2020 qualifier against Bulgaria in Sofia.

“Early into the second half, we got a corner and a couple of the players said to me there was monkey chants,” Loizou told Sky News.

“We got over that, we carried on playing. They got a penalty and my goalkeeper was spat at and had missiles thrown at him.

“The referee halted the game briefly, they scored the penalty, one of players went to pick the ball out of the back of the net and Coby Rowe was racially abused.”

Loizou said he had to take his players off.

“I looked at a couple of our players’ faces and I was distraught myself, just to see their faces. I gave it a couple of minutes and I went on the pitch and pulled my players off,” he said.

“There was no way that two or three of those players could have continued playing. What they heard was disgusting, they looked frightened.

“I can’t sit down and watch young players being abused by a minority.”

Rowe later posted on Twitter: “Can’t believe I’m tweeting this and it’s 2019 but today I was a victim of racism, in what was supposed to be a great day for @HaringeyBoroFC. Another game of football ruined by racists.”

Anti-discrimination charity Kick It Out praised the “swift and decisive action” taken by Loizou and his players.

The FA said it was looking into the incident “as a matter of urgency”.

In a statement, Yeovil said: “We are aware that there are allegations that racist comments were made in the crowd and this allegation will be a key part of any investigation.

“Irrespective of the outcome of any investigations, we would like to make it clear that the club will not accept racism or discrimination in any form.”

England players endured monkey chants and apparent Nazi salutes in Bulgaria. That match was stopped twice as England players made their feelings known to UEFA officials before the tie was eventually completed.

Aston Villa’s Tyrone Mings, who made his international debut that night and was singled out by the Bulgarian crowd, applauded Haringey for “taking a stance” against racism.

“Sometimes it can get brushed off in lower leagues but everyone stands with you,” he tweeted. “Our country isn’t perfect either.”