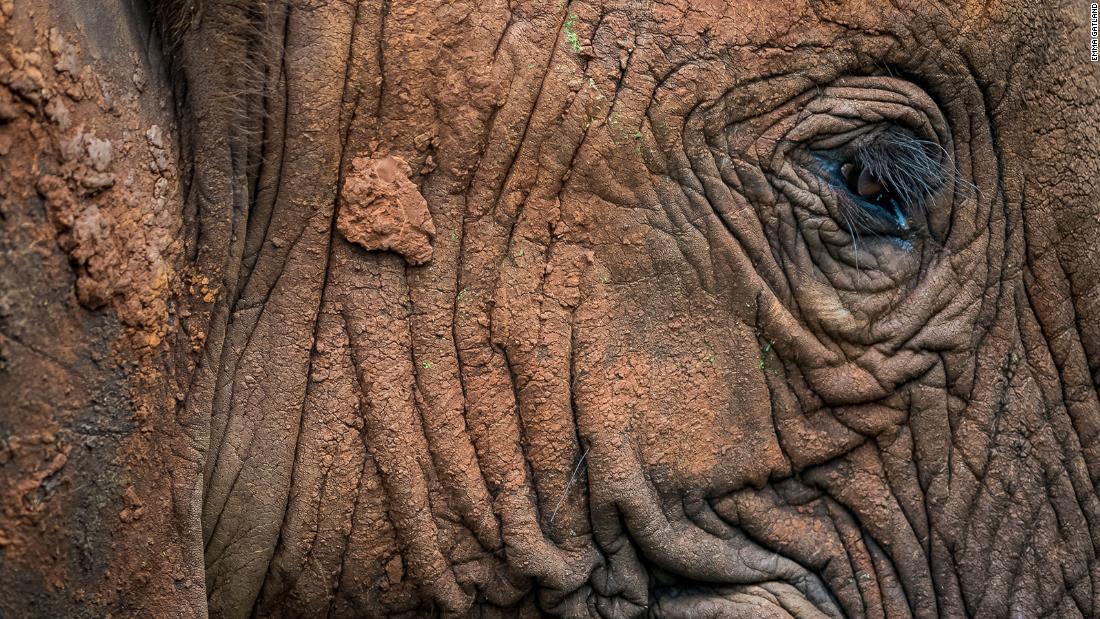 (CNN) — Emma Gatland grabbed her fish-eye lens and pointed it up towards the sky.

In her frame was a rhino, tied up by its snout and four feet, being airlifted by a helicopter — while suspended upside down.

It was a peculiar sight, but for Gatland, the photo she captured in that moment demonstrated a connection between nature and humans. It’s something the 39-year-old wildlife photographer strives for with every click of the shutter.

“You want to get into a low angle, get the feeling of what is happening — the creature being unharmed, but given the opportunity to live a little bit longer — and documenting what conservation (is),” Gatland says.

The rhino she photographed was undergoing relocation due to security reasons from the Hluhluwe-Imfolozi Game Reserve in KwaZulu-Natal, South Africa. For these endangered animals, airlifts are the best option for their health, as being upside down opens their airways.

Born in Zimbabwe, Gatland grew up in South Africa and developed her love for nature after years of family holidays in diverse outdoor environments. “These became my ultimate happy places,” Gatland says, adding she was drawn to “the rawness, the beauty, the vastness (and) the quietness.”

She purchased her first camera for a trip to Morocco and says she quickly fell in love with the combination of “the technical and artistic.”

The first time she held that camera, “it just felt right,” Gatland recalls. “I remember this ecstatic feeling. Every time I pick up the camera, I still feel the same way.”

As Gatland’s camera equipment became more advanced, so did her creativity, attention to detail and technical knowledge.

“The ultimate privilege in life for me is of capturing a moment in time that is gone in a click, never to happen again,” Gatland says, “yet (giving it) a timeless acknowledgment and honoring that it was there.”

Patience is the key, particularly as a wildlife photographer waiting for something “epic,” she adds. Creating a composition that puts perspective on the subject while capturing it in a creative sense is the trickiest part, taking into account unpredictable factors such as lighting, weather and the animals themselves.

“It’s engaging in the place you’re located in … and documenting it in its rawest form that excites me, but it’s also a challenge at the same time,” Gatland says.

Inspired by photographers who bend the rules of conventional photography, Gatland has developed her own artistic sense by utilizing different techniques and playing with light and color.

In South Africa, where an abundance of wildlife provides picture-perfect opportunities, a wave of young photographers is emerging — capturing awe-inspiring moments that carry an important message.

She points to Chad Cocking, a local wildlife photographer based in Timbavati, in northeastern South Africa, as an example of someone who brings in all the proper camera gear and selects the appropriate settings, “and then put(s) his little creative spin on it,” she adds.

Her dream photograph is to capture something in epic lowlight, like “a lion breathing out in the morning mist of a coolish air in Kruger National Park with the sun rising behind it, or a leopard up in a marula tree with the moon setting behind it,” she says.

Elephants like this one are some of Gatland’s favorite animals to photograph.

Gatland says she wants her photos to tell a story and hopes that they draw attention to some of the urgent issues that these animals face — particularly rhinos, which are under threat from poachers seeking their horns.

The white rhinoceros, which frequently appears in Gatland’s images, is classified as near threatened — with just 18,000 of the species left in the wild.

Gatland is also an example of the growing number of women in Southern Africa’s nature photography field.

There weren’t many female photographers in the business when she began her journey, Gatland says, but she finds that the the ones who are present “bring a softer side to the subject.”

She hopes her photography will achieve international recognition and inspire other female photographers, whether young or old, to share the way they see the world.

“Keep shooting and get to know your camera,” Gatland says. “Create something that’s not out there.”