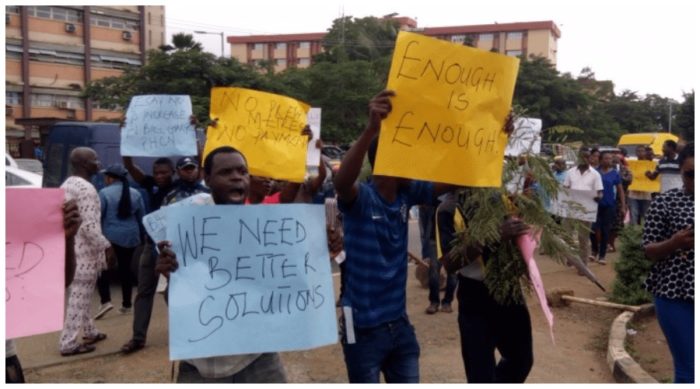 Electricity consumers on Monday opposed the planned tariff increment by Ikeja Electric (IE), demanding that 90 per cent of customers should be metered before any upward review of tariff.

The customers also slammed the Nigerian Electricity Regulatory Commission (NERC) for failing to protect the interest of Nigerians who are still subjected to exploitative estimated bills by the electricity Distribution Companies (Discos).

The News Agency of Nigeria (NAN) reports that they made their views known at the Extraordinary Tariff Review Stakeholders Consultation organised by IE in Ikeja.

The 50 per cent tariff increase, which is expected to begin from April 1, will raise the average tariff from the current level of N27.30 per kilowatt to N40.95 per kilowatt.

Speaking at the forum, Mr Sural Fadairo, National President, Energy Consumer Rights and Responsibilities Initiative, said IE should give priority to metering of all customers under its network instead of asking for a tariff review.

Fadairo said the Discos were not following NERC regulations in issuing their estimated bills, urging the regulatory agency to be alive to its responsibility.

“We are going to resist this increment and we will go to court. 90 per cent of customers must be issued pre-paid meters before any talk of tariff increment,” he said.

On his part, Mr Adeola Samuel-Ilori, National Coordinator, All Electricity Consumers Protection Forum, said the increment was uncalled for based on various factors.

He said: “Firstly, it is not yet five years since the last Multi Year Tariff Order (MYTO) was implemented, which was in February 2016.

“Secondly, many consumers still buy transformers and line materials which are supposed to be purchased by the Distribution Companies (DisCos).

“The third ground is efficiency. Going by Section 76 (I) (2) of the Electric Power Sector Reform Act 2005, the law says each licensee must have solved the issue of efficiency and this has not been done.”

However, Mr Anthony Youdeowei, Chief Executive Officer, IE, said the consultation forum was one of the requirements by NERC before tariff review, noting that the proposed increment was aimed at achieving a cost reflective tariff.

Youdeowei explained that the tariff increment was not only for the Discos but for the electricity industry and for better service delivery by various levels of the value chain.

He said according to the proposed new tariff of N40. 95 per kilowatt, the disco will get 39 per cent, the Generation Company will get 49 per cent while the Transmission Company gets the remaining 12 per cent.

Youdeowei said the increment was justified because the last Multi Year Tariff Order (MYTO) was implemented in 2016 when the exchange rate was N198. 97 to a dollar which has moved up to N309. 97.

He said that inflation rate which was 8.8 per cent in 2016 had also gone up to 11.3 per cent, stressing that most of the equipment used for power distribution and maintenance were bought abroad.

On the Performance Improvement Plan of the company, he said IE was committed to metering all its customers by 2022 and reducing Aggregate Technical, Commercial and Collection (ATC&C) losses to 8.8 per cent by 2024.

Also, NERC Chairman, Prof. James Momoh, said engagement of customers was very critical before any tariff review, stressing that it was an opportunity for stakeholders to ask the Disco what it was willing to do for them.

Momoh, represented by Mr Friday Sule, Zonal Officer, North Central, NERC, said NERC would continue to ensure that all stakeholders adhere to the regulations guiding the operations in the power sector. (NAN)