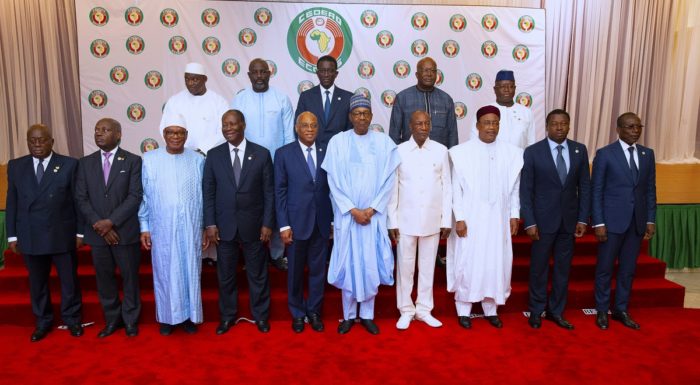 The Authority of ECOWAS Heads of State and Government has constituted a committee, headed by President Roch Marc Christian Kabore of Burkina Faso, to study and make a full report on Nigeria’s land border closure with her neighbours.

Malam Garba Shehu, the Senior Special Assistant to the President on Media and Publicity, confirmed this development in a statement in Abuja on Monday.

He revealed that the decision to set up the committee was agreed on Sunday night in Addis Ababa, Ethiopia, at an extraordinary session of ECOWAS leaders convened on the margins of the 33rd AU Summit to discuss the issue and other pressing regional matters.

Nigeria’s Foreign Minister, Geoffrey Onyeama, told journalists after the three-hour closed door session that the meeting was attended by President Buhari and chaired by the ECOWAS Chairman, President Mahamadou Issoufou of Niger Republic.

The presidential aide disclosed that the meeting also discussed West Africa′s new single currency, the Eco, and the situation in Guinea Bissau after the presidential election.

On border closure, Onyeama said: ‘‘The President of Burkina Faso is charged with undertaking a full study of the situation, make a report and then we take it from there.’’

Asked when the report will be presented to ECOWAS Heads of State and Government, the Nigerian Minister replied: ‘‘As soon as possible, there are no timelines. But he is supposed to start very quickly, study the situation from all the affected countries and present his report.’’

On the Eco currency, the Foreign Minister said: ‘‘Nothing has changed in respect of Nigeria’s position’’.

He added that Nigeria’s position was that the convergence criteria had not been met by majority of the countries, therefore there has to be an extension of time on the take-off of the single currency.

On Guinea Bissau, the Minister said ECOWAS leaders recognized that there was an appeal of the presidential election result and ”they are waiting for the Supreme Court decision on the matter”.(NAN)