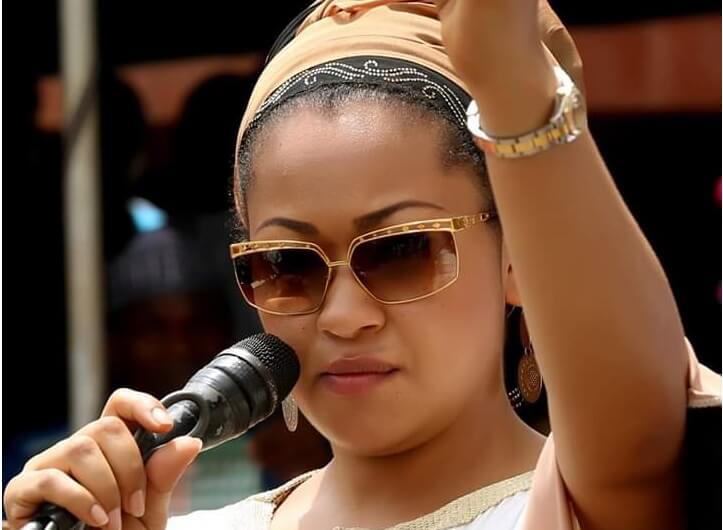 The Federal High Court, Abuja, on Monday, dismissed a suit filed by Natasha Akpoti,  the candidate of the Social Democratic Party (SDP) in the Nov. 16 governorship election in Kogi, against the Governor, Yahaya Bello, for lacking in locus standi.

Justice Inyang Ekwo, who delivered the judgement, held that the alleged offence was criminal and not a civil case, which could be instituted by an individual.

The judge therefore declared that the plaintiff had no legal right to institute the case.

The News Agency of Nigeria (NAN) reports that Justice Ekwo had, on Dec. 6, 2019, fixed Jan. 20 to deliver a judgment in the suit, seeking Gov. Bello’s disqualification over alleged double registration as a voter.

NAN reports that the SDP’s candidate had, in a suit number: FHC/ABJ/CS/1221/2019 dated Oct. 10 and filed by Chief Mike Ozekhome, SAN, on her behalf, sought the court’s determination on the eligibility of Bello, at the just-concluded election, having been allegedly involved in double registration as a voter.

But Bello had told the court that he was ready to defend himself on the allegation of double registration, framed against him by Akpoti.

While Akpoti was the plaintiff, the All Progressives Congress (APC), the Independent National Electoral Commission (INEC) and Bello; were 1st, 2nd and 3rd defendants respectively.

Delivering his judgment, Justice Ekwo, who noted Akpoti’s prayers before the court, said that one of the issues raised in the 1st defendant’s application, was for the court to determine whether the plaintiff, who was not an aspirant in its primary election, had a locus standi to file the suit.

He said that the plaintiff relied on sections of the Electoral Act, 2010 (as amended), as the basis of her locus standi to challenge Bello; as APC’s candidate for the poll, following his involvement in electoral fraud.

“In her argument, the plaintiff said that such a person is not a fit and proper person to be voted for, in any election, let alone for the highest office of a governor of a state,” the judge said.

Justice Ekwo, however, held that the section cited does not deal with fraud matters.

“The question now is whether the plaintiff locus standi to find a civil cause of action on Section 24(1)(e) of Electoral Act, 2010 (as amended). The answer is simply, no!

“It can be seen from the originating process that this suit is a civil action. It is not about the prosecution of the 3rd defendant for the allegation stated in Section 24(1)(e) of Electoral Act, 2010 or proving the case against him beyond reasonable doubt, as prescribed by the law.

According to him, going by the wordings of provisions of Sections 24 and 24(1)(e) of the Electoral Act, 2010, it is my opinion that no litigant can create a civil action out of the provisions.

He said the effect of lack of locus standi of the plaintiff portrayed that; “the court cannot exercise jurisdiction on this matter.”

Justice Ekwo, therefore, struck out the matter for lack of locus standi.

In an interview with newsmen shortly after the proceeding, Counsel to Governor Bello, Muizudeen Abdullahi, said the court judgment had reaffirmed his position that the judiciary was on course.

According to him, what the court had done today was to apply the law.

“The plaintiff actually filed the action challenging the qualification, nomination and sponsorship of Yahaya Bello, in the election that took place on Nov. 16, 2019.

“And we, as counsel, have the duty to assist the court in knowing the position of the law.

“So we filed a preliminary objection challenging the competence of the action and in the judgment this morning, the court agreed with us that the plaintiff who filed the action had no locus standi to file the action on the grounds that the section of the law, which she came under, was the section that confides a criminal power against any of the persons that breached the provisions of the law.

“So Section 24(e) as considered by the court has a criminal nature and not a civil action.

“So she filed a civil action and the court said by virtue of the fact that a section speaks on criminal issues, you, as an individual without a fiat of a prosecuting body, cannot file action, or a civil action to claim that one be punished under the law,” he said. (NAN)