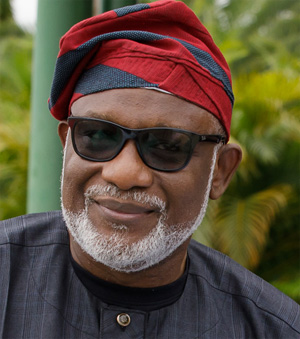 Gov. Oluwarotimi Akeredolu of Ondo State has allayed the fears of residents over a confrmed COVID-19 case in the state and has enjoined them to abide by the laid down precautionary measures.

The News Agency of Nigeria (NAN) reports that the Ondo State Government announced a confirmed case of the virus on Friday.

Akeredolu spoke in Akure on Saturday in a live broadcast at the Government House.

According to him, the coronavirus is a real global pandemic that has no regard for status although being confirmed is not a death sentence.

“I must thank the people for keeping faith and working together with the government to fight this terrible infection.

“Only one case, it is unexpected, but we have duties to ensure that it does not go beyond that. Three additional isolation centers would be built,” he said.

Earlier, the State Commissioner for Health, Dr Wahab Adegbenro, had confirmed the first case of the virus.

Adegbenro described the case as a military personnel returning from India who had been on voluntary self-isolation since arrival.

He explained that the case was already being monitored, adding that the victim developed symptoms on Thursday.

“His sample was taken for testing and the result came back yesterday positive.

“Immediately, our people moved in for contact listing and they have been asked to stay in self-isolation in the barracks.

“We have also moved the patient to our Infectious Disease Hospital (IDH) facility and he is quite stable. He has been receiving treatment since yesterday; so far, no cause for alarm,” he said. (NAN)