A top official with the United Nations Refugee Agency, UNHCR, has bemoaned the deplorable conditions under which Cameroonians fleeing the Anglophone crisis are living in Nigeria.

Antonio Canhandula, a Programme / Operation Manager and UNHCR representative made his reservations via his twitter handle after visiting some of the refugees in Nigeria’s Cross River and Benue States earlier this week. Other refugees are living in the Akwa Ibom and Taraba States.

One tweet disclosed how some women said they had so little food to feed their families that they had to carry bricks to earn money to supplement what relief agencies provided.

Accompanying a photo of young children lined up in a school he wrote: “Beautiful Cameroon refugee students. Children do not deserve the unfortunate situation of a refugee. This is freedom and human growth arrested. Robbing children of a future. An urgent solution is called for. Ikom.” 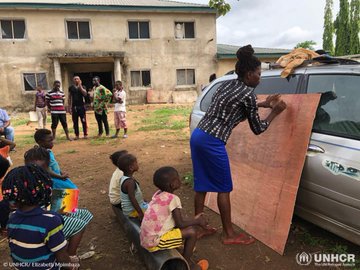 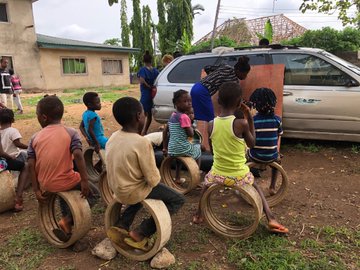 “Children need to continue with their learning. I teach them outside here to make sure they can learn something” Odi Geraldine, trained teacher #Cameroonian #refugees in Ikom, #CrossRiver state. #CameroonRefugees

Then there was the story of how a expectant mother who fled the crisis back home had delivered a day before the UNHCR visited. Ernestine Etioe, 23, gave birth at a clinic located in Cross River State.

The UNHCR’s records indicate that 20,000 plus Cameroonians have fled the country’s North West and South West regions due to what has become known as the Anglophone crisis.

Canhandula’s reservations are the same as those of the agency he represents. The UNHCRaside pushing that a political solution be found to the crisis holds that it does not have enough funds to cater for the growing number of refugees.

Secessionist elements pushing for independence under the so-called Ambazonia Republic have often clashed with state security agencies. They had earlier used guerilla style attacks to kill over twenty security forces.

The recent leg is armed exchanges and the use of kidnappings. So far, two government officials are in their custody. The Catholic Church’s relief wing in Nigeria has said the refugee influx also hurts Nigerians as it deepens their own poverty situations.

Dialogue has been advanced as a key solution to the crisis that started in October last year. Interior Minister Paul Atanga Nji is on record to have said the government will only dialogue with persons who believe in the unity of Nigeria.

Beautiful Cameroon refugee students. Children do not deserve the unfortunate situation of a refugee. This is freedom and human growth arrested. Robbing children of a future. An urgent solution is called for. Ikom.

Ernestine Etioe, 23 year old #CameroonRefugee delivered a baby girl on 28 March 2018, a day before UNHCR visited.  We handed over a care package to our new baby!  A proud moment @ Obudu Ranch clinic, Cross River State. The girl needs protection & a future & that is not in exile!

Cameroon refugees in Agbande, Benue, cooking elephant grass for food. These women tell me that SEMA provided food 8 times since November. Food lasts 2 to 3 days and we work for the local community to get food, such as carrying their bricks for construction. 20 naira per brick!