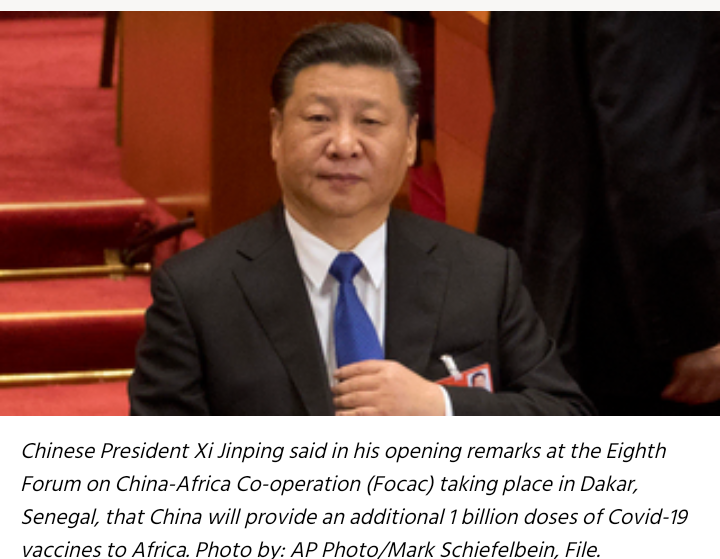 CHINESE President Xi Jinping said in his opening remarks at the Eighth Forum on China-Africa Co-operation (Focac) taking place in Dakar, Senegal, that China will provide an additional 1 billion doses of Covid-19 vaccines to Africa.

This would help the African Union achieve its goal of vaccinating 60 percent of the African population by the end of 2022. The 1 billion doses are split into 600 million doses as a donation and 400 million to be provided through joint ventures between Chinese companies and the relevant African countries. The vaccines will be supported by 1 500 medical personnel and public health experts.

China by November 12 had already provided over 1.7 billion doses of Covid-19 vaccine to more than 110 countries and organisations, including 50 African countries and the African Union Commission, and is striving to provide a total of 2 billion doses by the end of this year, according to the white paper titled “China and Africa in the New Era – A Partnership of Equals”, which was released by the State Council Information Office on November 26 ahead of the Focac meeting in Dakar. Funds and materials had been donated to 20 countries in Africa and the African Centre for Disease Control and Prevention via the China-Africa Business Council.

Over the past 65 years, China and Africa have forged unbreakable fraternity in the struggle against imperialism and colonialism, and embarked on a distinct path of co-operation in the journey toward development and revitalization, Xi said.

“Together, we have written a splendid chapter of mutual assistance amidst complex changes, and set a shining example for building a new type of international relations,” he said.

In addition to the 1 billion Covid doses, Xi pledged to undertake 10 poverty reduction and agricultural projects for Africa, and send 500 agricultural experts to Africa as promoting agriculture is a key area for job creation, food security and poverty alleviation. China will set up a number of China-Africa joint centes for modern agricultural technology exchange, demonstration and training in China.

China will also encourage Chinese institutions and companies to build in

Africa demonstration villages for China-Africa co-operation on agricultural development and poverty reduction, and support the Alliance of Chinese Companies in Africa for Corporate Social Responsibilities in launching the initiative of “100 Companies in 1 000 Villages”.

CDC Headquarters Building – the first modern Centre for Disease Control and Prevention in Africa – located in a southern suburb of Ethiopia’s capital of Addis Ababa, finished the capping process on November 26. The project was undertaken by China Civil Engineering Construction under China Railway Construction.

The project, once completed, will become the first pan-African Centre for Disease Control and Prevention on the African continent, fully equipped with modern administrative, experimental and other supporting facilities, enhancing Africa’s disease prevention and monitoring capability as well as its responsiveness to epidemic emergencies, and strengthening the continent’s public health system and capacity.

A total of 25 Chinese economic and trade co-operation zones have been established in 16 African countries, according to the China-Africa Economic and Trade Relationship Annual Report (2021) released in September. These co-operation zones help boost local industrialisation in diverse fields such as resource utilisation, agriculture, manufacturing, trade and logistics.

Focac will also promote new growth drivers such as e-commerce, building 5G networks, and greening the economy with a view to promoting high-quality and sustainable common development.