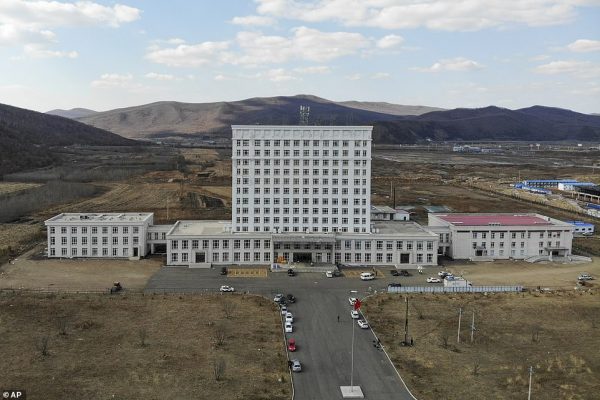 Hospital
Workers at a Chinese city bordering Russia have spent six days converting a 13-storey building into a makeshift coronavirus hospital for patients without symptoms as Beijing faces a fresh flare-up in its far-flung north-east.

Russia has become China’s largest source of imported cases, according to state media. Most of the patients are Chinese citizens doing business in the neighbouring country.

The new field hospital has 580 beds and is situated in Suifenhe, a prefecture-level city that shares a 27-kilometre land border with Russia.
Imported cases and asymptomatic patients, who show no symptoms but can still pass the virus on, have become China’s chief concern after draconian containment measures succeeded in slashing the overall infection rate.
With a population of around 70,000 and frozen-in for much of the year, Suifenhe has at least 243 imported COVID-19 cases out of nearly 1,000 confirmed and suspected cases.
More than 100 people in the area have tested positive for the virus but showed no symptoms.
Recent arrivals from Russia account for nearly half of China’s imported cases.
The remote city in Heilongjiang Province went into full lockdown last Wednesday.
On the same day, former epicentre Wuhan, which is more than 2,600 kilometres away, saw its restrictions lifted.
Heilongjiang health officials today reported 79 new ‘imported cases’ in the region, including 65 sufferers without symptoms.

Workers and volunteers in Suifenhe started to turn a former office building into a temporary ‘fang cang’ hospital on April 6.
The project was largely complete on April 11.

Nine out of the 13 floors of the hospital will be dedicated to treating COVID-19 patients with no symptoms, China Central Television Station reported on Sunday.

Hundreds of medical workers will be sent to the hospital from different parts of Heilongjiang and other provinces.