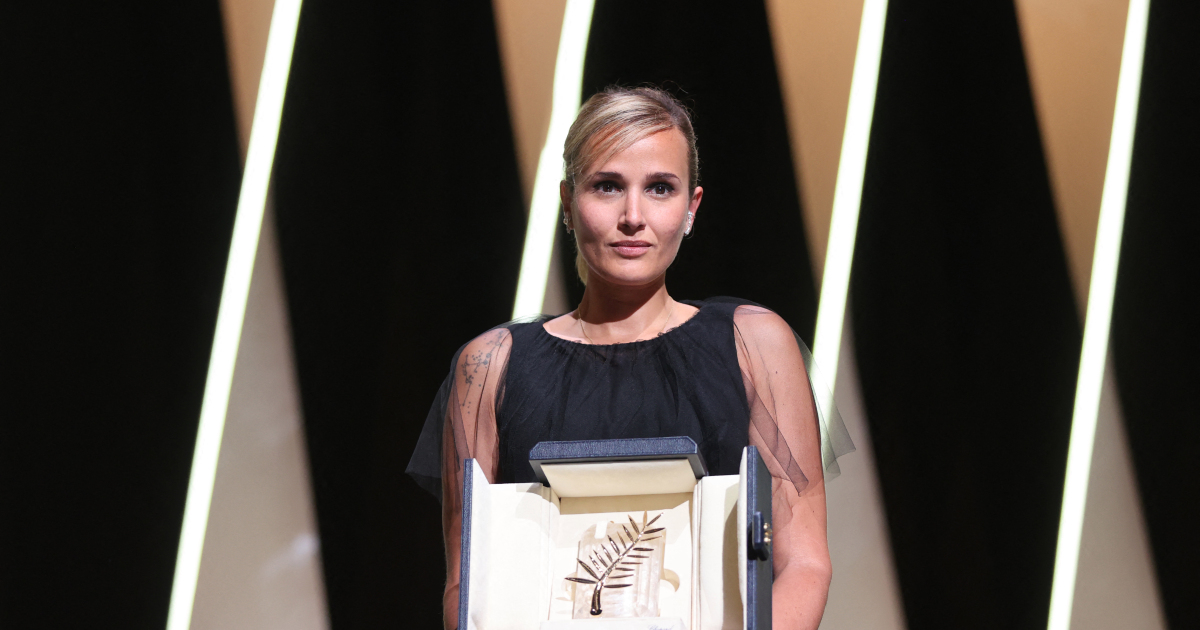 French director is only the second woman to scoop the top prize in Cannes Film Festival’s 74-year history.

“Titane”, a wildly imaginative film about a serial killer who has sex with a car, has won the Palme d’Or prize at the Cannes Film Festival.

The win on Saturday makes French director Julie Ducournau only the second female filmmaker to scoop the top honour in the festival’s 74-year history.

Her violent film split critics, with some praising its originality but others put off by its frantic and messy approach. Described as a “body horror” movie and based around a character with a titanium plate in her head, the film impressed with its energy.

“It’s also impossible to predict where it’s going to go next.”

The win for Titane was mistakenly announced by jury president Spike Lee at the top of the closing ceremony, unleashing a few moments of confusion. Ducournau did not come to the stage to accept the award until the formal announcement at the end of the ceremony.

But the early hint did not diminish from her emotional response.

“I’m sorry, I keep shaking my head,” said Ducournau, catching her breath. “Is this real?”

She thanked the jury for “letting the monsters in” and afterwards, acknowledged to reporters her place in history. But she also said her win “can’t be boiled down to just being a woman”.

The only previous female filmmaker to win Cannes’ top honour — among the most prestigious awards in cinema — was Jane Campion for “The Piano” in 1993.

In recent years, frustration at Cannes’ gender parity has grown, including in 2018, when 82 women — including Agnes Varda, Cate Blanchett and Salma Hayek — protested gender inequality on the Cannes red carpet. Their number signified the total number of movies by female directors selected to compete for the Palme d’Or — 82 compared to 1,645 films directed by men.

This year, four out of 24 films up for the Palme were directed by women.

The Cannes festival is the world’s biggest and returned to the French Riviera this year after a 2020 hiatus due to the coronavirus pandemic. The event drew stars such as Matt Damon and Sharon Stone to the red carpet, with moviemakers and actors delighted to be back though attendance was down on previous years.

Once the awards were officially announced on Saturday, other big winners included Leos Carax, who was picked as best director for “Annette”, a musical about two artists caught in a twisted love affair.

The second-prize Grand Prix was shared between “Compartment no6” by Juho Kuosmanen, about a woman who embarks on a train journey across Russia, and “A Hero” by Iran’s Asghar Farhadi, which features a prisoner faced with a moral quandary.

Hamaguchi Ryusuke and Takamusa Oe of Japan won best screenplay for their tale of heartbreak and loss “Drive My Car”.

It was a huge night, too, for the previously unknown Norwegian actress Renate Reinsve, who was rocketed to stardom by her role in “Worst Person in the World”. The film by Joachim Trier is a modern day romantic comedy that was a big hit with critics.