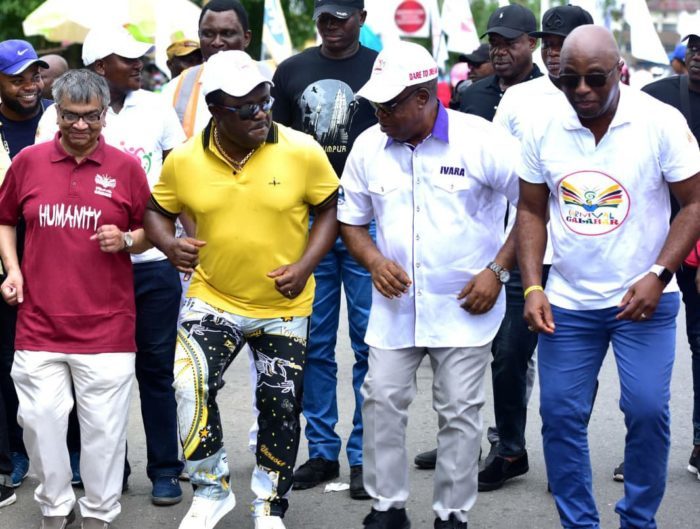 By George Odok
Gov. Ben Ayade of Cross River has called on nations of the world to put an end to wars and crises all over the globe and embrace peace.

Ayade, who was represented by his deputy, Prof. Ivara Esu, made the call on Sunday in Calabar during the flag off of the first dry-run of the 2019 annual Calabar carnival.

He said that the theme of the carnival “Humanity” was chosen to draw the attention of the world to be humane and to live in peace with one another.

The governor, who said that kindness should rule the mindset of people around the world, added that peace cannot thrive in hostile environment.

“As we flag off the 2019 Calabar carnival, the theme has been designed to see people as human beings and not as robots.

“We should be kind to one another, that is the focus of this year’s carnival and we hope that the bands will try to interpret the theme in their colourful display,” he said.

Speaking, Mr Gabe Onah, Chairman of Calabar Carnival Commission, said that the 2019 edition marks another circle in the annals of the history of Calabar carnival.

Onah said that before the flag off, the commission had taken Calabar carnival to Accra in Ghana and other parts of the world.

He maintained that the festival has become the largest street party in Africa.

“We have received two foreign embassies that are here to partner with us on the business side of the carnival.

“For the first time, we will be having three Asian countries at the carnival village; Bangladesh, Vietnam and Dubai Tourism. They have arrived at the camp and have also visited some tourists sites in the state.

“As we continue to improve on our efforts to create livelihood for our children and unborn generation, we believe that by the time this embassies continue to showcase and partner with us, they have taken us to the world,” he said.

Bangladesh High Commissioner to Nigeria, Amb. Shammed Ahsan, said he was happy to be invited for the carnival.

He described Calabar as an accommodating and friendly city that is most suited to host the carnival which has an international outlook.

He commended the theme of the carnival, saying that irrespective of race, religion, tribe or culture, citizens of all countries were still human beings.

“Humanity should be something that should prevail among us a rallying factor. Bangladesh will be attending the carnival in December for the first time.

“This platform will afford us the opportunity to showcase the cultural diversity not only of Nigeria, but that of other countries,” he said.