Mar 8, 2022 International Day of the Woman, Peace and Sustainability, Women 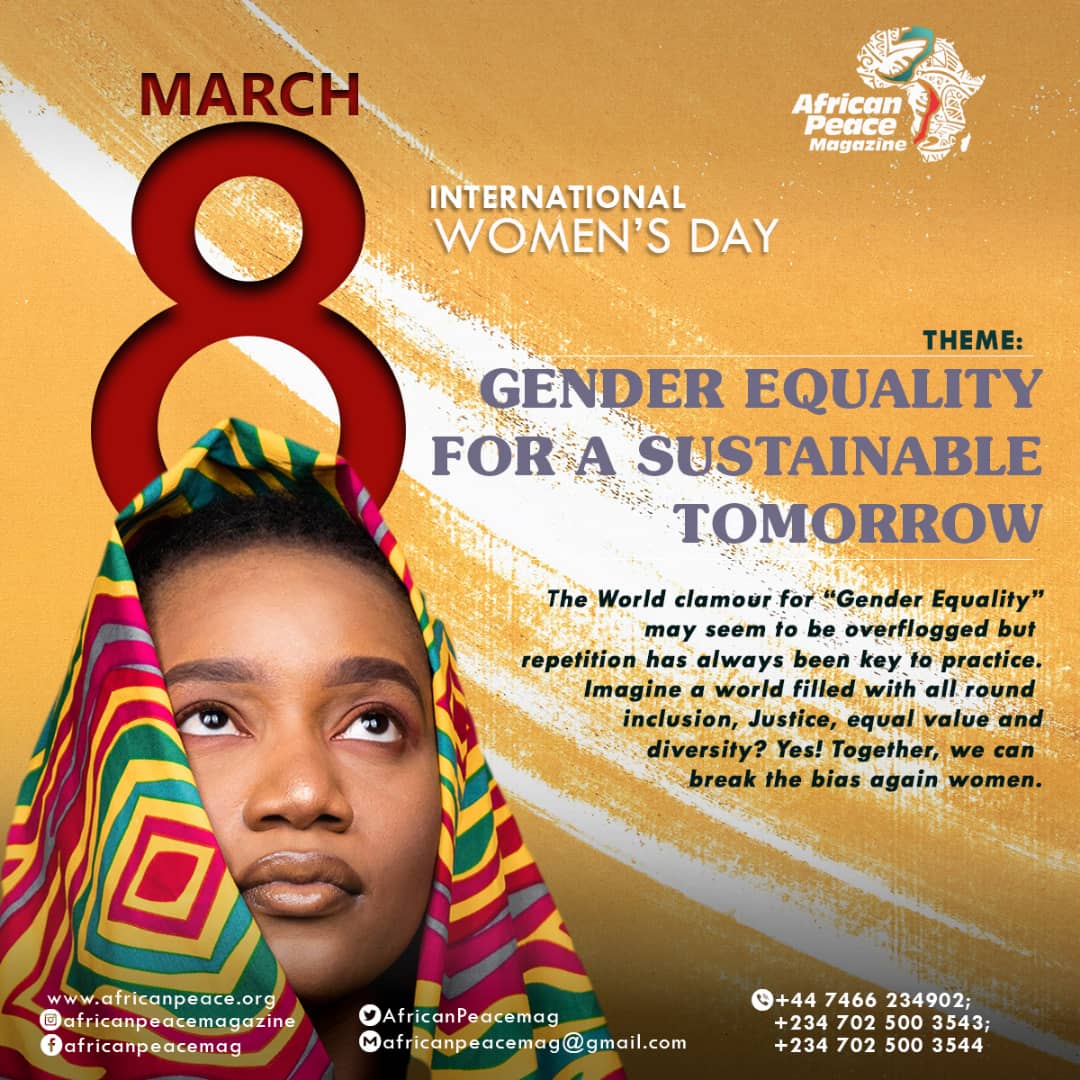 It is International Women’s Day today and the theme, in line with that of most preceding years, bothers on Gender Equality, to break the bias that hinders it while paving a solid path for a sustainable future to thrive.

Over the years, women have been hugely stereotyped for all of the other “domestic” impacts they make in society. There’s no doubt that these impacts have birthed children, made men, and also fanned egos. There also seems to be no end to this cliché but it’s just fair (like the world says today), to lay profitable emphasis on the recognition and inclusion of “diverse” women in the local and global systems.

“Why the echo?” People will ask. There is a need for the narrative towards what women can do and cannot do should change, in this age. Someone said and rightly too that we are in the age of the woman. This age requires that the future be inclusive of women in all spheres of life.

Dialogues, core participation of women in decision-making systems should be deeply encouraged, to foster the idea of a sustainable future which the world steadily clamors for.

There’s a huge difference it makes when women are regarded with no bias or societal stereotypes. Gone are the days when a woman’s place ended in the kitchen. These days, women venture into diverse booming industries such as tech, health, international development, governance, etc and they perform optimally.

There are a lot of ways to celebrate this day as a woman or as an individual who appreciates the impact of a woman in your life – First, appreciate the idea that women are as important as they should be (without bias), then cross your arms in solidarity to this belief.

The above actions are necessary to foster knowledge about bias and its ability to break a woman’s positive impact in society. It is this bias that leads so many women, especially girls into entering early marriages, having esteem issues, losing rights to their bodies, etc.

Breaking the bias is expedient for the fair protection of women from the unending patriarchal demands which totally point fingers of all childcare, home front, financial and sexual blames to her. It’s alarming the rate at which tables of this reality turn and each time, it faces women. It is this cultural perception that people should be free from (sadly, this shackle runs deep in our society today) Women are humans too.

Breaking the Bias is an all-time journey as it has become truly difficult to paint the picture of ‘gender justice’ successfully. The world seems to have been created with that stubbornness; the reason we are still at this point. Daily, women and children die from what should have been avoided if there was a protective system in place. It’s a sad reality that we refuse to live with.

Breaking the bias is at all levels, a catalyst for peace building and all-around development. This is because if there are equal opportunities for men and women and a shift in the standard of marginalization and the age-long cultural stereotypes and perceptions, there’d be a better understanding of the need for both genders to work together, towards achieving a sustainable future.

A sustainable future isn’t farfetched. It is as obtainable as the word itself. It’s only the change in mindset that is needed. There can be no successful pretense towards the women race. The dignity of a woman lies in honesty and truth be told, all the woman needs is THE TRUTH. If the truth about her true place in society can be spread, the world would have been on a faster pace towards gender freedom.

Recognition of the difference and equity in values is something to clamor for; a course worth fighting for. Unfortunately, as much as there is a progressive effort from world authorities such as the United Nations and its likes, there is still really more to be done especially with the rural mentality that abounds all around.

Here’s a shocker: Civilization has got nothing to do with the primitiveness of societal decisions against women.

Undoubtedly, there have been arguments towards the ‘gender course’ and researchers have so many approaches and analyses towards these gender issues and focal implementations.

The end line regardless is the utmost need to keep in place the virtue of inclusiveness so that one gender doesn’t suffer(societally) more than the other.

We, as people can break the bias!

Ruto Sworn In As Kenya’s President After Divisive Poll

UNICEF condemns Ethiopian attack on Tigray which strikes a kindergarten