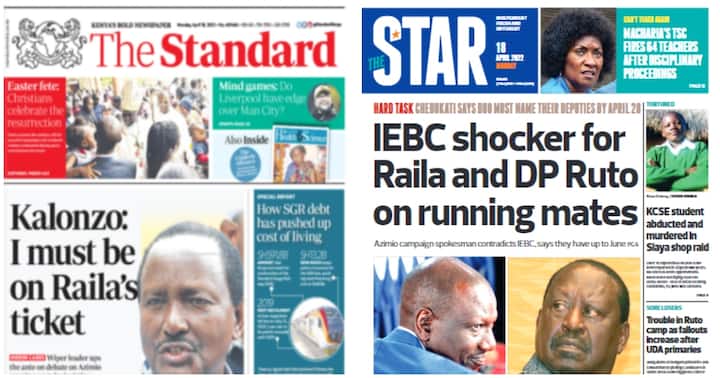 On Monday, April 18, local newspapers examined the August 9 succession politics as splinter groups arose in President Uhuru Kenyatta’s family over his choice of successor.
Pay attention: Become TUKO.co.ke ambassador – get a branded T-shirt, hoodie or water bottle at our TUKO Shop! Front pages of The Standard and The Star newspapers.

Photo: Screengrabs from The Standard, The Star. Source: UGC The dailies also highlighted the tension of choosing a running mate in the two leading camps for the presidency as the Independent Electoral and Boundaries Commission (IEBC) deadline beckons.

PAY ATTENTION: Install our latest app for Android, read best news on Kenya’s #1 news app However, the family is not in unison regarding the succession politics as a different faction has chosen to support Deputy President William Ruto against the first family’s stance on the matter. READ ALSO Kalonzo Musyoka Tells off Leaders Pushing for Kikuyu Running Mate: “I’m Also from Mt Kenya” The president’s first cousin Kung’u Muigai has opted to support Ruto, contrary to the president’s wish. According to Muigai, the Kenyatta family has never read from the same script as regards politics, and hence his decision is no exception. He said his choice for Ruto is justified and should not be interpreted as the first family being divided.

“In 1997, my elder brother, Ngengi Muigai was an ardent supporter of the late Kenneth Matiba and was in Ford Asili, while President Uhuru Kenyatta was in KANU,” said Muigai. “It is not something new and we have learnt to live with it. When we meet for family functions, we don’t discuss politics and there is no acrimony. Kenyans should differentiate between politics and family matters,” he added.

Their choice for a running mate would make or break their bids, given the significance of the position in wooing support from specific regions. As it were, Ruto and Raila have made clear their decision to pick their respective deputies from the populous Mt Kenya region, which has always been regarded as the powerhouse of Kenya’s politics. However, also on the duo’s shoulders is the aspect of them pleasing their influential allies who are not natives of Mt Kenya. This happens as the IEBC deadline for candidates to submit the names of their running mates continues to beckon.

The electoral agency has clarified that the candidates have until April 28 to name their running mates in the presidential vote. In Ruto’s camp, indications point at Mathira member of parliament Rigathi Gachagua, Kirinyaga governor Anne Waiguru and ANC leader Musalia Mudavadi.

Matiang’i said that Uhuru’s administration is neither a military junta nor a criminal enterprise for him (the CS) to fear facing punishment if his preferred presidential candidate (Raila) loses the election. READ ALSO Nandi: Young Aspirants Win Gubernatorial, Senatorial and Woman Rep UDA Tickets “We are not a military junta that is criminally in power so that when a democratically elected government comes in, we are going to face consequences for our crimes.

We are not governing criminally,” the CS told Daily Nation. The CS, who by virtue of his work will be tasked with the leadership transition, added that the country does not end because a new government has come in, even if the administration is from a different party from the one that was in power. It is worth noting that the Interior boss has been attacked severally by Ruto and his allies who said his elevation by the president to head a committee of cabinet secretaries was designed to undermine the deputy president.

“I would want to believe that our democracy has grown enough for people to understand that the primitive and adversarial relationship between people or grounds of party and ideology is not expected of a democracy like Kenya,” said Matiang’i. READ ALSO Uhuru Kenyatta Tells off Critics Questioning His Involvement in Succession Politics: “Go Threaten Your Equals”

The president is hopeful that the ruling party will have as many governors, senators, members of parliament and the members of the county assemblies post-August 9. Jubilee suffered a blow after many pioneer members decamped to reunite under UDA. The ruling party has since embarked on activations and other popularisation methods to remain afloat in the wake of the massive walkouts.

Ruto Sworn In As Kenya’s President After Divisive Poll

UNICEF condemns Ethiopian attack on Tigray which strikes a kindergarten