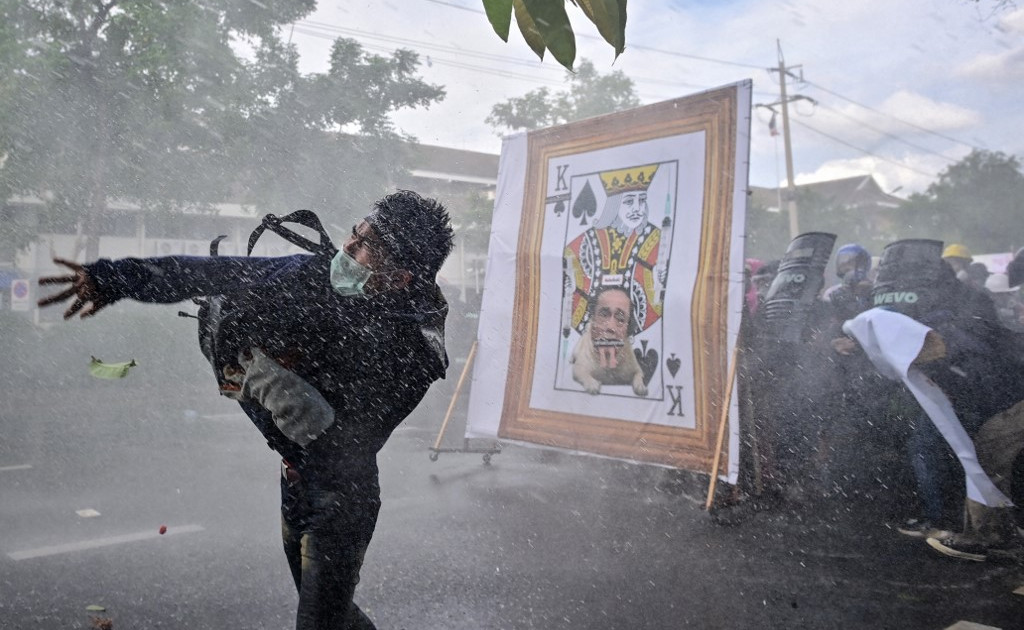 Bangkok, Thailand – Authorities in Thailand are facing allegations of using lawsuits and new emergency decrees to fend off a rising tide of public anger about their handling of the COVID-19 pandemic as the country’s infection rate and death toll continue to hit record highs.

Officials insist the moves are aimed strictly at those spreading false and misleading information, but their latest decree could let authorities block online reports that may “instigate fear” even if true, lawyers and rights groups said.

“The government is feeling vulnerable at the moment because of the amount of anger and criticism that they’re receiving because of their pandemic response,” said Matthew Bugher, the Bangkok-based Asia program lead for Article 19, a rights group that advocates for the freedom of expression.

“And so it seems that they’re wary of that anger and that criticism and that amount of angst being directed towards their administration, and they’re trying to crack down on dissent.”

But since April, the far more contagious Delta variant of the virus has reignited the outbreak, with a record 20,920 confirmed cases on Thursday and 160 deaths – slightly lower than the record daily death toll of 188 on Wednesday.

With only about 6.31 percent of Thailand’s 70 million people fully vaccinated against the virus as of Thursday, the latest wave has pushed the country’s public healthcare system to the brink.

As hospitals in the capital Bangkok fill up, authorities have been scrambling to set up ad hoc isolation wards in airport terminals, warehouses and decommissioned railway carriages.

One hospital has resorted to renting freight containers to store dead bodies after its morgue ran out of room.

Public disaffection with the government has grown in parallel with infections, reinvigorating a year-old protest movement calling on Prime Minister Prayuth Chan-ocha to step down.

Even allies of the government on Thailand’s conservative right are joining the calls for Prayuth to leave, accusing his administration of bungling the vaccine rollout. Nittitorn Lamlua, a veteran activist of the royalist “Yellow Shirt” movement that has backed the prime minister, led one of several rallies in late June urging him to resign.

A late-May poll by the state-sponsored National Institute of Development Administration found that more than half of Thais disapproved of the government’s handling of the pandemic.

“People in the middle who never criticise the government, now they … criticise the way the government is handling the situation, whether about the vaccine or the handling [of] infected people, how they get to the hospital, how they can connect to the healthcare system, all those things,” said Chawarong Limpattamapanee, president of the National Press Council of Thailand.

A spate of lawsuits, police probes and decrees have followed.

Police told reporters at the time that more than two dozen other celebrities were also under investigation, most of them for similar posts.

Government officials are also suing veteran politician Sudarat Keyuraphan for defamation and instigating unrest for collecting signatures for a proposed lawsuit against what her party, Thai Sang Thai, calls the “murderous government” for the way it has managed the COVID-19 crisis.

Sudarat told Al Jazeera she was pressing ahead with the petition and, with more than 800,000 signatures to date, would be filing her suit in criminal court next week.

She said the petition fell well within her constitutional rights and that the government’s countersuit was meant to bully not only her but other would-be critics into silence.

“The government is not only suing us, it is suing everyone who is now calling out the mismanagement that is happening during COVID-19,” she said.

“They intentionally use the law to intimidate people, and they’re violating the constitutional rights and the basic rights of the people.”

Free press and digital rights advocates are especially concerned about a sub-decree the prime minister’s office issued late last month using the emergency powers the government invoked in March 2020 in the name of battling the virus.

They said it bans not only any communication about the pandemic that is false or misleading but that may, quoting from the order, “instigate fear” whether or not the information is true.

Offenders could spend up to two years in jail.

If that communication happens online, the sub-decree also orders the National Broadcasting and Telecommunications Commission to tell internet service providers to identify the IP, or internet protocol, address from where it originated and block it, then hand the information over to police.

Rights groups warn the order may smother real news that could actually do the public good in the middle of a fast-moving health crisis.

“It is definitely broad enough to catch a lot of speech, including speech that is true, and also speech that is in the public interest,” said Bugher of Article 19.

“During a pandemic, it’s really important that people raise their concerns, voice their fears or worries, and speak out when they suspect that authorities are failing in their duties. We want people to blow the whistle if they witness corruption and raise alarms if there’s an outbreak,” he added.

Chawarong of the National Press Council said news outlets will be wary of publishing truthful stories for fear of running afoul of the new order.

“It damages the right of the public … to be informed,” he said.

“It prevents the media from presenting the facts, what is happening in society, especially during the pandemic.”

The group Article 19, the National Press Council and several other rights organisations and media associations have issued joint statements urging the government to repeal the order.

Thailand’s Human Rights Lawyers Alliance and 11 online media outlets have filed a complaint with the civil courts asking that the order be revoked for breaching their free speech and free press rights. A court is reportedly due to decide on the complaint on Friday.

The prime minister’s office did not reply to Al Jazeera’s requests for comment.

Spokesmen for the national police and the Ministry of Digital Economy and Society, which has a role in enforcing the latest sub-decree, could not be reached.

On a local television news show, Digital Economy and Society Minister Chaiwut Thanakamanusorn insisted officials would use the order to target fake news, though he also complained that when reports share incomplete information they can mislead and prompt panic.

The National Broadcasting and Telecommunications Commission’s acting secretary-general, Trairat Viriyasirikul, said critics of the sub-decree had nothing to worry about, according to the Bangkok Post.

“We insist that the NBTC has no intention of limiting people’s rights. We only oversee issues that may cause panic among the public,” he said.