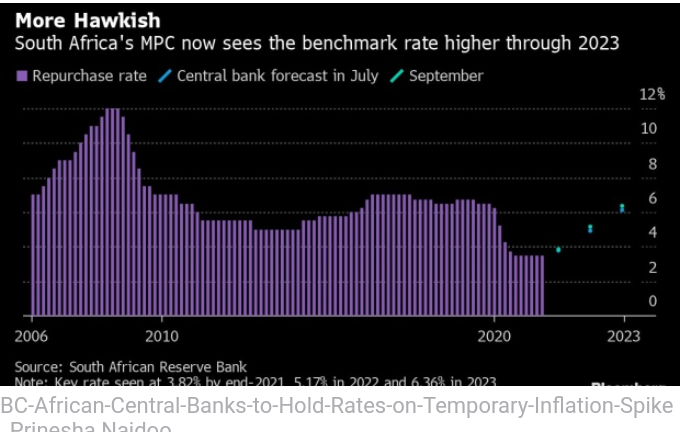 Central banks in six of seven major African economies will likely look past a temporary spike in inflation and leave interest rates unchanged this month to support economies that remain vulnerable to the effects of the Covid-19 pandemic.

Since the region’s rate-setting committees last met, domestic food costs have been driving up price growth, with average annual food-price inflation in sub-Saharan Africa accelerating to about 11% so far in 2021 from 2% in 2019, according to the International Monetary Fund. Higher oil prices are also adding to inflationary pressures in nations that are net fuel importers.

Still, rising prices are “not necessarily a departure from the norm in terms of the kind of inflation ranges we see,” said Razia Khan, head of research for Africa and the Middle East at Standard Chartered Bank. Most central banks in the region can “probably take their time to react to what’s going as it isn’t immediately clear that there’s a big need for very rapid tightening,” she said.

Only in South Africa is there a risk of imminent tightening. That’s because the nation’s liquid capital markets make it less insulated than the continent’s frontier economies from plans by developed economies to start reducing stimulus measures. That may force the central bank to lift rates to help keep local assets attractive to offshore investors.

“Africa’s major central banks are expected to keep rates on hold in the coming weeks, overlooking what is expected to be a temporary breach in their inflation targets due to higher oil and food pressures. The SARB, however, may hike the repurchase rate — it sees the risks to the medium-term inflation outlook as tilted to the upside and the market is growing increasingly concerned that it is falling behind the curve on normalization.”

Here’s what regional central bankers may do:

While inflation quickened to the highest level in almost four years in October, the monetary policy committee is expected to stand pat as it waits for the lag effects of higher energy prices to work their way through. The central bank said in September that price growth would remain in single digits over the short- and medium-term, and cut the ratio of reserves that lenders are required to hold in an effort to inject more cash into the economy, which the government expects to grow by 1.5% this year.

“We expect the Bank of Mozambique will tolerate this level of inflation given that the metical exchange rate has stabilized and our assumption that the global oil price will start to recede early next year,” Gerrit van Rooyen, an economist at Oxford Economics Africa, said in reply to emailed questions. “Our baseline forecast is for the policy rates to be kept on hold until at least the end of 2022.”

Mounting domestic and global inflationary pressures could push the South African Reserve Bank to raise its benchmark interest rate for the first time in three years, even as the economy probably contracted in the third quarter.

The MPC warned last month that delaying “lift-off” could see it play catch up with price growth and destabilize inflation expectations, which it prefers to anchor at 4.5%. Since then, local fuel prices have jumped to a record high, and the currency risks being affected by policy normalization in other emerging markets and the prospect of more aggressive Fed tapering, said Annabel Bishop, chief economist at Investec Bank Ltd.

“We’re around the 50% to 60% mark in anticipating whether there will be a hike this week,” she said. While no member of the five-person MPC has voted for tightening this year, the implied policy rate path of the bank’s quarterly projection model indicates a 25-basis point increase this month.

Of 20 economists in a Bloomberg survey, 11 predict a quarter-point increase and the remainder see no change. Forward-rate agreements starting in one month, used to speculate on borrowing costs, show traders are pricing in a 70% chance of a similar increase.

Ghana’s inflation rate jumped to a 15-month high in October, breaching the central bank’s target band for a second time as non-food prices surged. While Governor Ernest Addison said in September that the central bank stands ready to respond appropriately if there’s a higher risk of inflation moving outside the target band, policy makers are still expected to leave the rate unchanged at a nine-year low.

“The drivers of inflation are a supply-side cost push and not within the immediate remit of monetary policy,” said Courage Martey, an economist at Accra’s Databank Group. “A hike in the policy rate will only kill demand further and that is why I expect the rate to be held,” he said.

Slowing inflation should give Nigeria’s central bank room to leave its key rate steady for a seventh straight meeting and continue to support an economy that’s struggling to recover from its biggest contraction in three decades in 2020.

“It is evident that policy makers are focusing more on mitigating the risk from weaker growth, rather than the pressure of accelerated prices,” said Ikemesit Effiong, head of research at SBM Intelligence. “Since the turn of the year, supply chain issues have made inflation a global issue not peculiar to the Nigerian environment and cutting rates will not do much in protecting the Nigerian consumer from potential price rises, hence our thinking that rates will hold.”

While the central bank has made it clear that it’ll only effectively shift to taming price growth once it’s comfortable with output growth, there’s a chance that Fed tapering could prompt it to raise the benchmark by 50 basis points this month, warned Ibukunoluwa Omoyeni, an economist at Vetiva Capital Management Ltd.

He may return the benchmark to the record low 8% that he cut it to last year, said Trevor Hambayi, a Lusaka-based independent economist. The rate could be cut by as much as 50 basis points “on account of the appreciation of the local currency and the need to create impulse within the private sector to drive an economic recovery,” he said.

An imminent economic program deal with the International Monetary Fund could see Zambia increasing fuel pump and electricity prices, which may add to inflationary pressures and convince Kalyalya’s committee to keep rates steady.

Kenya’s MPC will likely keep its key rate unchanged for an 11th straight meeting as demand remains muted, even after the government eased some Covid-19 lockdown restrictions.

We believe the MPC would like to see a more entrenched recovery before changing the policy stance,” said Yvonne Mhango, Africa economist and acting head of research at Renaissance Capital. The bank will probably keep a close eye on gross domestic product data and real economy indicators like electricity consumption to guage whether the nascent recovery from last year’s virus-induced damage is sustainable and consistent, she said.

Angola’s central bank is expected to stand pat after raising its benchmark rate to a record high in July in an attempt to curb rampant inflation.

The MPC will wait to see how this year’s rate hike and new measures by the government to counter inflation such as lowering sales taxes and temporarily suspending import duties, filters through the economy, said Universidade Catolica de Angola Economist Carlos Rosado de Carvalho. Many of the price pressures in the economy are seen as imported and the pass-through from the central bank rate to inflation and consumer demand in Africa’s third-biggest oil producer is weak.