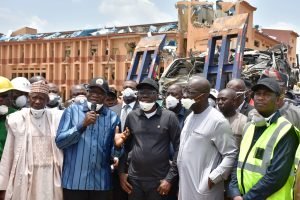 Speaking during the on-the-spot assessment of the explosion site on Saturday in Lagos, the Chairman of the forum, Gov. Kayode Fayemi of Ekiti, said that the donation was contributions from the 36 governors that made up the forum.

News Agency of Nigeria (NAN) recalls that the Lagos State Government had set up a N2 billion relief fund in the wake of the explosion, which occurred on Sunday, March 15 that claimed many lives and property.

The state government had made an initial donation of N250 million into the fund, while calling on well-meaning Nigerians to assist.

Fayemi, who is the governor of Ekiti, said that the governors would also review the donation and further contribute to the fund on a state by state basis.

The NGF’s chairman was accompanied by Gov Godwin Obaseki of Edo and Gov. Umar Ganduje of Kano to assess the depth of damages at the scene.

”I want to offer our condolences for the lives that had been lost and our commiseration to all the people who may have been connected to what happened here directly or indirectly, we pray for an avoidance of such an unfortunate incident in future.

”Also, on behalf of my colleagues, I am glad that Lagos State has moved in, to quickly demolish a lot of the properties along these lines, so that future occurrence of this can be avoided and urban planning regeneration of the environment can also commence.

”We are aware of the relief fund that the Lagos State Government has announced, and I have the authority of my colleagues in the governors’ forum to contribute N200 million to the recovery and relief activities that has already commenced,” Fayemi said.

He commended the Lagos State Government for being able to manage the situation thus far, and urged that people to desist from building on pipelines.

According to Fayemi, from findings, there is the indiscriminate nature of construction of private buildings in the explosion scene, which ought not be so.

”And it also speaks of the challenge that we have always confronted, in terms of federal-state relations.

“This is an area that has been occupied by Federal Housing Authority for a long time, although the governor of the state holds this land in trust for the people of Lagos State.

”There has been a whole back and forth as to the ownership and who disposed of this place, in order for Lagos to be able to do what they would have loved to do in terms of regeneration, and planning of this place.

”And in Lagos alone, this is not the first incident of this nature. There had been a number of incidents along pipeline corridor that also resulted to damage to property and loss of lives before now in Ijegun, in Abule Egba, in other parts of Lagos.

”So for us, it is both an on-the-spot assessment as to the recommendation we will make at the Nigeria Governors’ Forum on how to tackle this perennial problem and what to do with the relocation, protection of at least all lives and property, along pipeline corridor,” Fayemi said. (NAN)