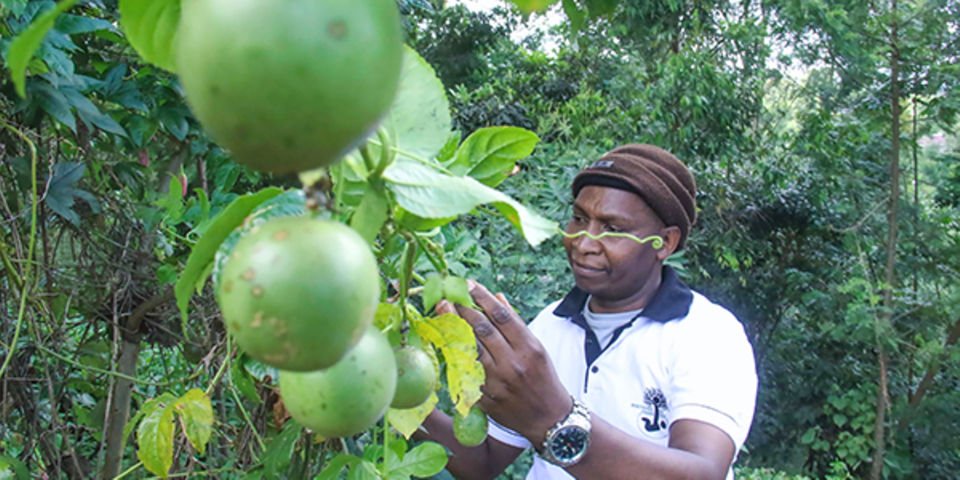 What you need to know:
Yellow passion fruit is best for the production of rootstock because of its superior disease resistance.
Seedlings will require up to four months to reach a suitable transplanting growth stage.
After about seven weeks of growth following transplanting, each plant should have up to four healthy lateral stems.
How do I grow passion fruits?

What are the requirements for passion fruit farming and do they have a ready market?
Moses Kimtai, Solai

Passion fruits do well in areas with the following ecological requirements:

Temperature: Optimum temperature for purple passion fruit is between 180C to 250C and 250C to 300C for the yellow variety.

Soils: Passion fruits do well in a variety of soils, which should be reasonably deep and fertile. A soil pH of 6.0 to 6.5 is the best. In high rainfall areas, the soils should be well-drained, as plants will not withstand water-logging or flooding.

Varieties: Both yellow and purple types exist. Purple varieties do better at higher altitudes than yellow types, which, however, yield higher and are more resistant to diseases.

The purple variety is very acidic, variable in taste and juicy with an intense aromatic scent and round in shape.

The yellow variety is bigger, with a similar taste but possibly less aromatic, more acidic and round in shape.

Both varieties are green before ripening. Yellow passion fruits are most widely grown for commercial purposes globally.

In Kenya, they are grown for local and export markets.

Planting and trellising
Passion fruit can be grown from seed but grafting often produces improved stock.

Yellow passion fruit is best for the production of rootstock because of its superior disease resistance.

The seed is germinated after the removal of the pulp and drying.

Germination requires up to four weeks. Production of seedlings in plastic bags is the most common method of growing young crops.

Up to three seeds are planted in each bag and then thinned to one after emergence.

Seedlings will require up to four months to reach a suitable transplanting growth stage.

After about seven weeks of growth following transplanting, each plant should have up to four healthy lateral stems.

Transplanting should be done at the beginning of the rainy season. Passion fruit has deep roots, so soils should be well-tilled.

Transplanting is often done along a fence to provide support or a wire trellis should be constructed.

The vines are usually directed so that growth is in both directions along the supporting wires.

Yields are highest following a regular fertilisation regime. Old or dead shoots should be pruned. Intercropping with vegetables or other annuals is recommended.

Once established, the vines grow rapidly and flowering starts after about seven months.

Ideally, young passion vines should be set in the field early in the growing season after the danger of drought is gone.

Passion vines are planted 2m apart between plants and 3m between rows.

Vertical trellises consist of heavy posts without cross-pieces, with two to three wires strung along the row like barbed wire fencing, attached to the posts from the top down at intervals about 30-40cm apart.

Trellis wires should be size nine or 10 galvanised steel. The posts need to be stout enough to withstand the weight of the vines throughout a season that normally includes the buffeting of strong winds.

Ideally, they should be long enough to provide a trellis height of 1.5m, with 45-75cm in the ground.

Trellis rows should be oriented north-south for maximum exposure to sunlight, and the vines should be allowed to grow together along the trellises to promote cross-pollination.

Fertiliser application
At planting, apply 175g of Triple Super Phosphate (TSP) and one ‘debe’ (about 20kg) of farmyard manure and mix well.

To obtain high yields, regular fertilisation is necessary. Apply 300g of Calcium Ammonium Nitrate (CAN) per plant per year in two applications of 150g each during the rainy season.

Spraying with foliar feeds and trace elements is also recommended.

Crop protection
Weeding is essential when the plants are first transplanted. Diseases are usually sufficiently controlled by crop rotation as plantations are not kept for more than three years.

Infected plant material should be pruned and destroyed and vines kept as open as possible to allow thorough application of sprays.

Diseases can also be controlled by the combination of good management, good orchard hygiene and a suitable spray programme.

Pests lower fruit quality and should be controlled by regularly checking the areas around the orchard for signs of build-up. If necessary, spray to control the pests before they spread to the crop.

Harvest
When ready for harvesting, the skin of the fruit is deep purple/yellow in colour. Its pulpy interior is bright yellow, filled with small black seeds. For fresh market or use, the fruit is picked when colour changes occur.

For processing, the fruit is allowed to drop to the ground and then picked at least every second day.

At this stage, the fruit is shrivelled but quite suitable for processing. Yields decline each year until harvests are not adequate in the fourth year.

Yields
Yields of over 15-20 tonnes/ha are attainable.

They have a ready market in supermarkets, open-air markets, hotels and restaurants, especially in major towns like Nairobi, and Mombasa.

You can also export your passion fruits to Uganda as there is a good market there.

Carol Mutua, crop production specialist
Kenya has experienced a rapid surge in food prices. What is the situation currently?

Food prices are still high as compared to previous months. For instance, the price of a 90kg bag of maize surged from Sh3,700 to Sh6,209.

Food imports from neighbouring countries have helped stabilise prices in the short term.

However, prices are expected to steady as the harvest season starts in many parts of the country, boosting the supply of commodities such as maize, wheat, rice, and beans.

How does the food price situation in Kenya compare with the rest of East Africa?

There has been a spike in food prices due to failed rains in several East African countries as well as the impact of the pandemic and the Ukraine conflict.

The difference in the impact has been in the measures put in place by the various governments to cushion citizens.

To enhance production, the government has also been running an input subsidy programme that provides fertiliser, seeds, agrochemicals and post-harvest technologies to maize, rice, potato and coffee farmers under the National Value Chain Support Programme.

Rwanda, on the other hand, in addition to reducing levies is also investing in local fertiliser manufacturing and subsidies on farming inputs.

Uganda is encouraging the cultivation and consumption of alternative crops. Ultimately, the key objective is the same – enhancing access and affordability of food commodities.

What has been the overall impact of the Russia-Ukraine conflict on agricultural production in Kenya and the rest of the continent?

Even before the conflict, Africa’s food systems were fragile. Droughts, climate change and conflict have continued to pile pressure on our food systems.

As a result, food prices on the continent are about 40 per cent higher than in the rest of the world. Disruptions like the Russia-Ukraine conflict have significantly affected Africa’s ability to feed itself and eliminate poverty.

Due to the crisis, fertiliser prices have more than doubled for some blends like Diammonium Phosphate (DAP) currently costing US$60 per 50kg bag, up from US$32 a year ago.

But due to this price increase, there is a good opportunity for farmers to adopt organic practices that help regenerate soil health and boost production.

These include the use of manure and planting nitrogen-fixing crops as part of crop rotation.

Food security
To boost food security in Kenya and the rest of the continent, measures need to be put in place to place agriculture and food security at the centre of economic development.

Food sufficiency needs to be a priority for African states, and this can be done by making it easier for farmers to access agro-ecologically appropriate yield-enhancing technologies, get appropriate and agro-ecology specific knowledge, access affordable credit, improve access to markets and create enabling environment for the private sector to thrive.

With rains having largely failed, do you see any impact of the impending harvest season particularly on maize prices?

We anticipate reduced production at the national level. This will continue to put a strain on commodity prices in the mid-term.

Moving forward, it is important to keep in mind that research shows that rainfall in Kenya has been declining since 1960 and could decline by more than 100mm per annum by 2029.

With the realities of climate change kicking in, it is imperative for Kenya and her neighbours to reconsider production systems under rain-fed conditions.

It is important to adopt climate-smart practices that protect soil moisture, such as minimum tillage, having crop cover and mulching.

Adopting practices that regenerate soils and transform landscapes such as agro-forestry are key and need to be promoted. Rainwater harvesting for irrigation should also be encouraged.

What options does the government have in bringing down the cost of food both in the short and long term?

It must increase investments in agriculture. Kenya is likely to have a population of 80 million by 2050.

We need strong policies on land utilisation to ensure we are able to feed this population in the future.

We also need to adopt good soil practices to ensure that we have healthy soils that can produce food by 2050.

And lastly, we must innovate on water use in agriculture. To do this, governments need to take a food systems approach in interventions to effectively tackle hunger.

This means taking a broad view from the farm to the table by adopting higher-yielding crop varieties.

The Kenyan government subsidised the cost of maize flour as well as things like fertiliser. How sustainable is this and do such moves benefit farmers?

Subsidies are important tools for stabilising prices to cushion consumers and promote production.