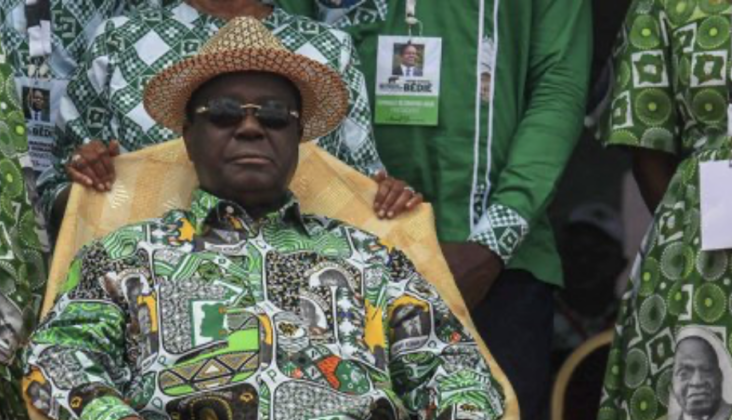 Young activists from the Parti Démocratique de Côte d’Ivoire (PDCI) are increasingly unhappy with their seniors. “Are activists only there to pay dues and hold meetings? Is the youth only good for lifting tarpaulins and chairs during meetings, and being instrumentalised in absurd internal wars?”, they ask on social media and in the Ivorian press.

“It is not easy to be heard in a party like the PDCI,” said Franck Medard Kouassi, secretary-general of the “Green Tide” movement, which claims between 4,000 and 5,000 members. The objective of Green Tide since its launch in 2020 is to bring the venerable Ivorian party to life on social media in order to “refresh its image with more modern communication.”

Members of “Green Tide” and other movements who dare to express themselves publicly have a host of grievances: “the party is resistant to debate and contradiction”, “folklore of the personality cult”, “no vision”, delegations “in hibernation”, lack of field mobilisation, internal struggle between the party’s leaders.

“We are worried about the future of our party which, I remind you, has been the opposition for 23 years. How can we win the 2023 local elections and especially the 2025 presidential elections without a strategy and without involving the youth? We ask that an assessment be carried out to identify what is not working and move forward. Our ambition is to govern, President Bédié must address the problem,” Kouassi says.

He hopes that the party congress, which has been postponed several times, will be held this year and that a consensus candidate will be designated at the end of it. And if it ends up being the 88-year-old former president, like in 2020, the youth will follow, said Kouassi.

Since the failure of the party’s strategy during the October 2020 presidential election and despite adjustments to the political formation’s structure, there are constant, low-key recriminations.

“These reproaches are the work of a handful of manipulated young people. Otherwise, why this coordinated action on social media, from one day to the next?” asked a senior party official. According to him, this manipulation was orchestrated by people who were dissatisfied with the changes that had taken place at the head of the PDCI last year. “The house is not in danger, we are zen,” he said.

He reiterates the words of Valentin Kouassi – president of the PDCI youth (JPDCI Urbaine), one of the official organs of the party’s youth – who in a recent interview with Ivoir’hebdo also refused to speak of “anger and even less of discontent”, even though he had mentioned “discord” a few days earlier.

In response, Kouassi refutes any form of manipulation, despite rumours of a close relationship with Jean-Louis Billon who had, for a time, expressed a desire to run as the PDCI’s presidential candidate. “I read that but it is completely false. We work on our own, we are not affiliated with anyone.”

The PDCI says it is waiting until after the funeral of the president’s elder brother, who died last August and which will take place in Daoukro from 28 May to 5 June, before it convenes a political bureau to set the date of the congress and put things straight.

After spending three months in his native region, Bédié was welcomed back to his residence in Abidjan on 17 June by Bernard Ehouman, his chief of staff and Georges Philippe Ezaley, the party’s deputy executive secretary. And even though some saw it as a hasty return due to the grumbling, his entourage assures that on the contrary, it was completely planned.