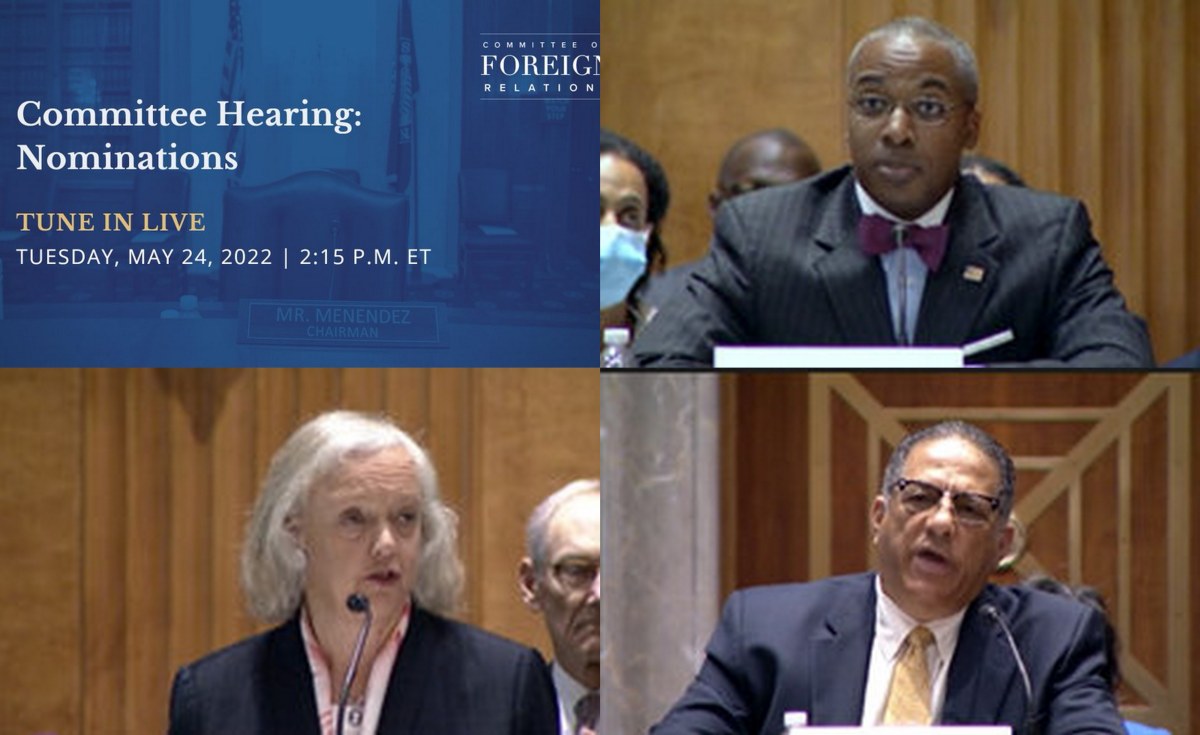 The U.S. Senate moved a bit closer to confirmation of President Biden’s nominees for six key ambassadorial posts in Africa with a hearing on Tuesday. [Watch]

The three political nominees who testified during the first panel convened by the Foreign Relations Subcommittee on Africa and Global Health Policy include Dr. Reuben E. Brigety II, who before being tapped for South Africa, was the vice chancellor of the University of the South and previously served as deputy assistant Secretary of State and U.S. Ambassador to the African Union under President Obama and as dean of the Elliott School of International Affairs at George Washington University. He is a graduate of the Naval Academy and Cambridge University.

Dr. Michael A. Battle Sr., the nominee for Tanzania who preceded Brigety as U.S. ambassador to the African Union during under President Obama, is a theologian, priest and former army chaplain. He coordinated the Africa policy team for the Biden-Harris campaign and earned degrees at Trinity College, Duke Divinity School and Howard University (DDiv).

Margaret (Meg) Whitman, Biden’s choice for Kenya, chairs Teach for America and previously served as the CEO of three Fortune-100 firms – HP, eBay and most recently the short-lived Quibi. She was introduced at the hearing by Senator Mitt Romney, a long-time friend whose presidential campaigns in 2008 and 2012 she supported. She was national co-chair of the McCain campaign in 2008, was defeated as Republican candidate governor of California in 2010 and supported Hillary Clinton in 2016 and Joe Biden in 2020.

The three career diplomats who testified during the hearing’s second panel included: Michael C. Gonzales (Zambia), currently a deputy assistant secretary in the Africa Bureau and served previously in Nepal, Malawi, Zimbabwe and Ethiopia; John T. Godfrey (Sudan), currently the Acting Counterterrorism Coordinator who has served in Saudi Arabia, Iraq and Libya; and Michael J. Adler (South Sudan), has served on the National Security Council staff as director for Afghanistan, where he also served in addition to Iraq, Bosnia and Herzegovina, Paris and Qatar.

With Senate Republicans still delaying votes for all Biden State Department nominees, necessitating separate Senate floor votes on cloture for each, confirmation will not likely be soon for any of the six. Currently 14 American embassies in Africa have no confirmed ambassador in place, according to the list maintained by the American Foreign Service Association.

RELATED: Biden Democracy Summit – Who’s There and Who’s Not from Africa?