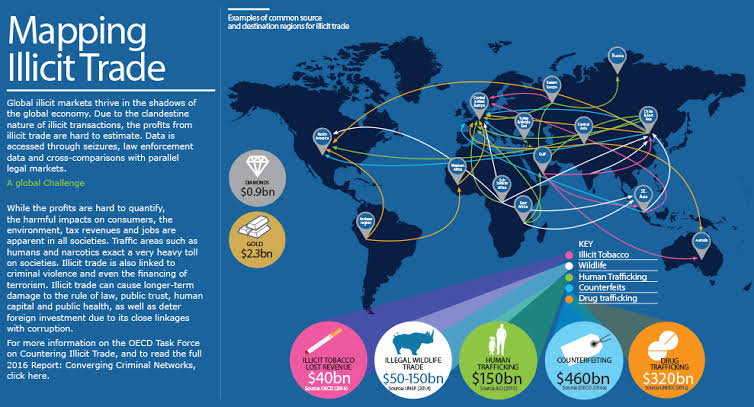 By Kabir Muhammad
Esteban Giudici, Senior Analyst, Transnational Alliance has said that economic leakages from illicit trade creates an annual drain on the global economy of 2.2 trillion dollars, equivalent to three per cent of the world’s economy.

Giudici said this during the 2019 Africa Security Forum (ASF) at Rabat, Morocco on Thursday.

He said data on this activity has previously been scarce, adding that there are mounting evidence of the economic, social and environmental losses it caused.

“If illicit trading were a country, its economy will be larger than Brazil, Italy and Canada – and as large as Mexico and Indonesia combined.

“Illicit trade significantly endangers all aspects of the SDGs.

“The World Economic Forum estimated the value of illicit trade and transnational criminal activities at eight to 15 per cent of global Gross Domestic Product (GDP) in 2014.

“With estimations of various illicit activities running upward of $3 trillion; these figures rival the GDP of some G7 countries,’’ he said.

Giudici said the activities create a triple threat to the finance development by depriving governments of revenues for investment in vital services.

He said this has continued to increase the costs of achieving the SDGs by eroding the progress already made.

“One of the biggest oil producers in the world loses as much as 30 per cent of its refined petroleum products through theft, diversion and smuggling into neighbouring states.

“To compound the problem, its government loses associated tax revenues and spends billions on curbing this illicit trade in petroleum.

“Illicit trade pushes endangered species to the brink of extinction and causes irreversible damage to ecosystems.

“For instance, illegal logging, with an estimated annual value of up to $157 billion, is the world’s most profitable crime involving natural resources,’’ he said.

Giudici called for participatory approach in implementing the fight against climate change.

He also appealed to G7 leaders to sustain counter illicit trade in their countries.