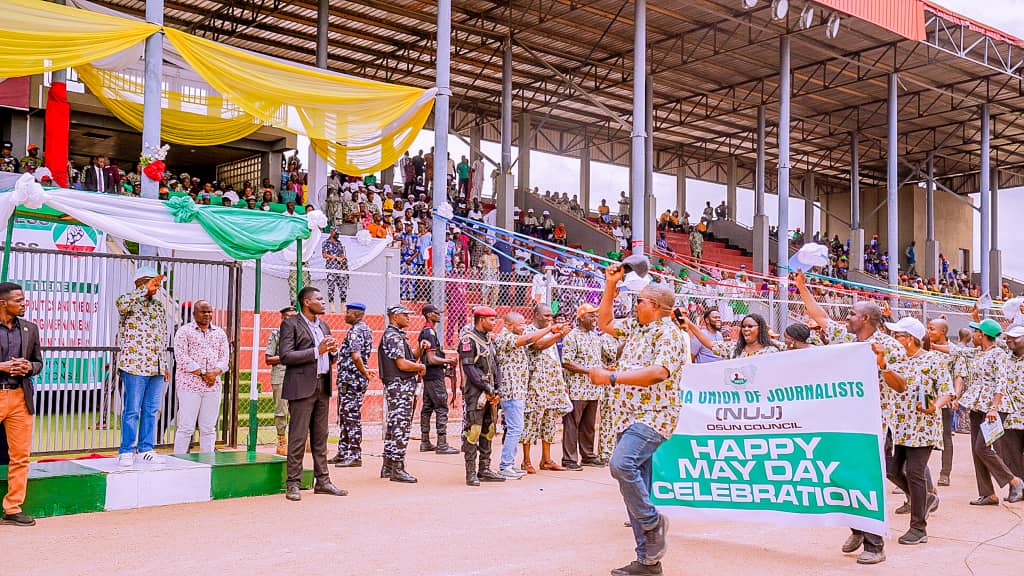 Osun state governor, Adegboyega Oyetola, has announced the approval of the seven major demands of the members of the Joint Labour Movement in his Workers’ Day speech, Sunday.

Speaking at Osogbo city stadium, Oyetola also ordered immediate commencement of the process of domestication of 65 years retirement age/40 years length of service for teachers in the State, and commencement of the process of reverting from the current Council-Manager to Head of Local Government Administration and from Head of Department to Director at the Local Government system.

The approval was also given to establishments matters, that is, the conduct of outstanding promotions nominally from 2019 to date, regularisation, advancement and conversion, among others, while approval was also made on the appointment of Permanent Secretaries in due course to put an end to the use of Coordinating Directors in Ministries, Departments and Agencies.

Oyetola described workers as indispensable companions and engine room of his Administration, saying it is on record that Osun workers had laboured stringently in the collective quest to build a truly-revitalized economy that is alive to the deepest yearnings of the people and focus on creating an enduring wealth in pursuit of his Development Agenda.

He said his administration has made the issues affecting workers utmost priority amidst the scarce resources available to the government in the face of competing demands saying “this we have embarked upon as a matter of deliberate policy in the realization of the fact that workers are critical to the success of any administration, being the engine room for the implementation of government policies.

The state chairman, Nigeria Labour Congress (NLC), Comrade Jacob Adekomi, expressed profound gratitude to governor Oyetola for granting the requests of workers in the State, saying the development will go a long way to further better their lives.

Adekomi said the express approval of the seven demands of workers was a clear testimony that, indeed, the Governor meant well for the workforce.

The labour leader who acknowledged that the administration of Governor Oyetola had indeed put Osun on the pedestal of socioeconomic rejuvenation as seen in the monumental achievements in all sectors, said the workers in the state were resolutely behind him and were ready to re-elect him for a second term.

“We are very happy because Mr Governor has made our day. He has shown to us once again that he is a promise keeper with the approval of our demands that have been ordered for immediate implementation.
“We shall continue to appreciate Mr Governor for putting smiles back on our faces and for being a better bridge between then and now.”

In their separate remarks, the State Chairman, Trade Union Congress, TUC, Comrade Adekola Adebowale and State Chairman, Joint Negotiation Council (JNC), Comrade Bayo Adejumo, reaffirmed their loyalty and support for the administration saying “we are solidly behind you and your Administration.”