Witness exposes Suswam in court over transfer of N3.1bn 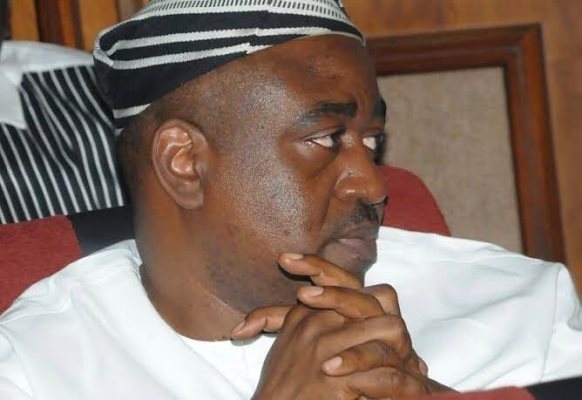 Mr Abubakar Umar,  an Abuja-based Bureau De Change (BDC) Operator, told Justice Okon Abang at the Federal High Court, Abuja, that the money was transferred through a company, Elixir Investment, in  bits into his company’s account name, Fanffash Resources, at the Zenith Bank.

He said the total amount of the money in dollars was $15.8 million at N197 per a dollar at the time.

News Agency of Nigeria (NAN) reports that the EFCC had, in 2016, presented Umar before Justice Ahmed Mohammed as 4th prosecution witness in Suswam’s matter.

However, Justice Mohammed, on Dec. 11, 2017, declared Umar hostile to the EFCC in the trial of the former governor after the witness contradicted himself while testifying in the case on May 5, 2016.

Although the trial could not continue before Justice Mohammed, who recused himself from the case due to a report by an online media of a bribery allegation against him, the matter was later assigned to Justice Abang by the court’s authorities.

Justice Abang had, on Thursday, adjourned the trial till Jan. 31 at the instance of the defence.

At the resumed trial on Friday, the EFCC lawyer, Rotimi Jacobs, SAN, told the court that he was ready for the trial and that the 4th prosecution witness (PW4) was in court.

“My Lord, the witness cannot speak fluently so he will require an interpreter,” he said.

Giving his evidence-in-chief before the court, Umar , who spoke through an interpreter, said his office is located at Zone 4 Plaza, Abuja.

He said in 2014, the former governor sent for him to meet him (Suswam) at his residence in Maitama District, Abuja.

“I came and met him in his house at Maitama near the mosque. I met him with a woman. He asked me to give my account number.

“I now gave my account number to the woman. The governor now said I would see money in my account,” he narrated.

The PW4 said after two days, N413 million was transferred into his account on Aug. 8, 2014, from Elixir Investment.

“The woman now called me if I have seen the money and I said yes, I have seen money in my account.

“I now called the former governor when the money entered my account. The fist money she put was 413 million.

“The former governor said I should change it to dollars. After two to three days, I changed it to dollars and called him that what you asked me to do I have done it.

“He (Suswam) now said I should bring it. I called him again to clear the gate for me that I am bringing it to his house. I now took it to him,” he said.

Umar said he took a taxi to deliver the money to Suswam at his Maitama house.

The witness also told the court that there were subsequent transfers made into his account.

“There were some subsequent payments from time to time.

He said he decided to use taxi drivers he was not farmiliar with due to security reasons.

Jacobs asked Umar that “in his defence, the former governor said you did not give him any money?”

In his response, the witness said: “If I didn’t give him that money, I would have been dead since.

Umar confirmed that the Exhibit B, pages 21 and 66, contained his photograph, company’s name, telephone number and account number.

When asked if he knew what the ex-governor used the money for, the PW4 said: “After I delivered the money, I don’t know what the governor does with them.”

However, there was a drama when the EFCC counsel asked Umar if he remembered that he had once given the evidence before Justice Mohammed that he (Umar) delivered the money to former governor Suswam at Government House and not at his house in Maitama.

As soon as the witness affirmed what the prosecution lawyer said, Chinelo Ogbozor, counsel to Suswam (1st defendant), objected to the question, citing relevant sections of the law.

She urged Justice Abang not to allow the witness give such evidence without the prosecution producing the certified true copy (CTC) of the proceedings before Justice Mohammed.

After an argument that lasted for several minutes, Justice Abang, in his ruling, overruled the objection raised by the defence.

Citing sections of the law, the judge said the witness has the right to give evidence regarding what transpired in previous proceedings before Justice Mohammed.

Abang, who said it was the defence counsel who ought to produce the CTC of previous proceedings before another court if they have any objection, adjourned the matter till Feb. 3 for continuation of trial.

NAN reports that Suswam and the then Commissioner for Finance in his administration, Omadachi Oklobia, are being prosecuted before the court on N3.1 billion money laundering charges.

They were accused by the EFCC of diverting the money which was said to be part of the proceeds of the sale of some shares of Benue State in a company.