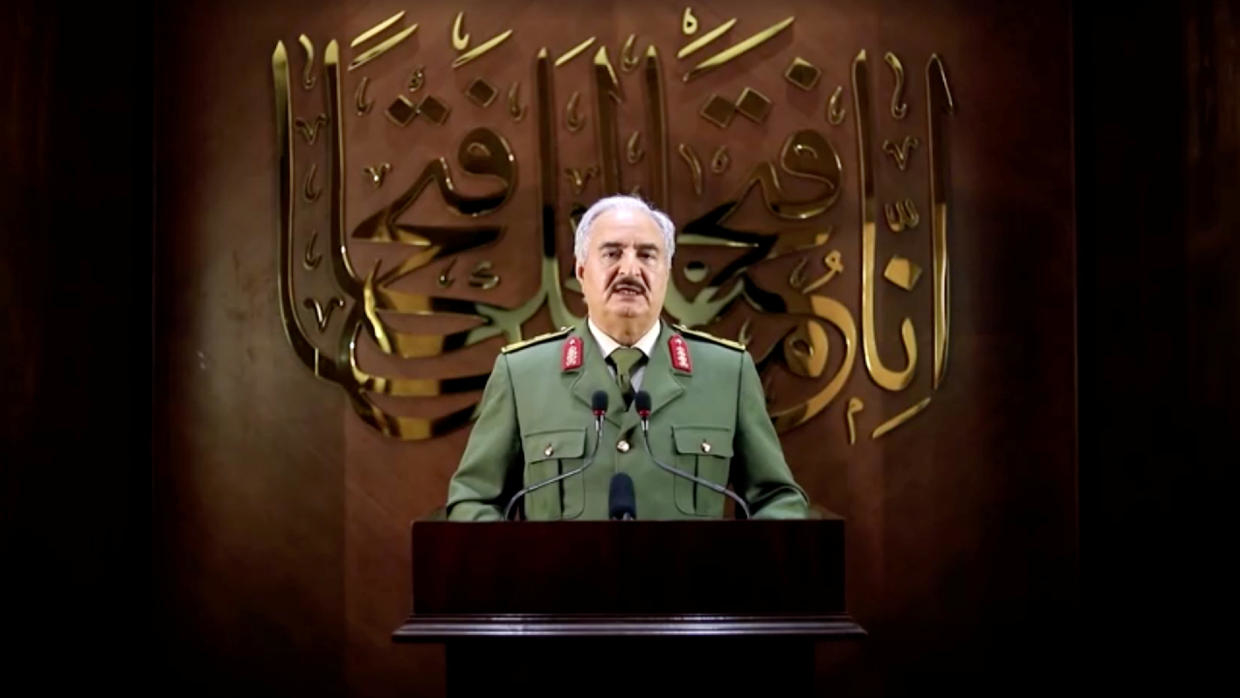 France said on Tuesday that the Libyan conflict could not be solved through unilateral decisions, but only under U.N.-backed dialogue after Libya’s eastern-based military leader Khalifa Haftar’s move to seize control of the country.

“The solution to the Libyan conflict can only go through dialogue between the parties under the aegis of the United Nations, not through unilateral decisions,” Foreign ministry deputy spokesman Olivier Gauvin said in a statement that made no direct reference to Haftar.

“There is no alternative to an inclusive political solution, as part of the conclusions of the Berlin conference,” Gauvin said, adding Paris was attached to Libya’s unity and stability.

Haftar said on Monday his Libyan National Army (LNA) was accepting a “popular mandate” to rule over the country, apparently brushing aside the civilian authorities which nominally govern eastern Libya.

Accused by critics of wanting to install a new military dictatorship, Haftar, who controls swathes of eastern and southern Libya, announced his self-styled “army” was “proud to be mandated with the historic task” of leading Libya.

Analysts said his move was a sign he wanted to consolidate his power after a series of setbacks earlier this month, when GNA forces captured a string of strategic towns west of Tripoli.

The oil-rich North African nation has been gripped by chaos since the ouster and killing of longtime dictator Moamer Kadhafi in 2011, with rival administrations in the east and west vying for power.

Haftar claims legitimacy from an  eastern-based parliament elected in 2014, but the body has not said whether it supported his move.

He did not offer specifics on how he had received his “mandate” or from which institution.

Nor did he say whether the parliament, which was forced to move its headquarters after violence ripped apart Tripoli six years ago, would be dissolved.

A source close to Haftar said he was preparing to announce a new government in eastern Libya.

Haftar also announced the end of the Skhirat Agreement, a 2015 United Nations-mediated deal signed in Morocco that produced the Tripoli-based unity government.

In a pre-dawn statement, the Government of National Accord in Tripoli denounced Haftar’s announcement as “a farce and the latest in a long series of coups d’etat”.

Haftar previously announced the end of the Skhirat Agreement in 2017 and three years earlier also said on television that he was taking power in Libya.

The United Nations, which mediated the deal, voiced concern Tuesday over Haftar’s move.

“For us the (Skhirat) agreement, the institutions that come out of this agreement, remain the sole internationally recognised framework of government in Libya,” said UN spokesman Stephane Dujarric.

Pro-Haftar forces have been battling to seize Tripoli since April last year but their offensive stalled on the edge of the capital.

Backed by Turkey, they are now encircling Haftar’s main rear base at Tarhunah, 60 kilometres (39 miles) southeast of the capital.

The GNA claimed Haftar’s latest announcement was an attempt to “conceal the defeat of his militias and mercenaries” and “the failure of his dictatorial project”.

Hamish Kinnear, an analyst at Verisk Maplecroft, said his move “to formalise his direct control of eastern Libya is a sign of his rising desperation in the face of GNA successes in western Libya”.

“By sweeping aside the authority of the (parliament) and electing himself as undisputed leader in the east, Haftar is making himself central to any negotiated solution,” Kinnear said.

On Tuesday however, Kremlin spokesman Dmitry Peskov said Moscow “is still convinced that the only possible solution in Libya depends on political and diplomatic contacts between the parties to the conflict”.

Washington called for dialogue between the two sides and a “humanitarian” truce.

The American embassy in Libya tweeted that “the United States regrets… Haftar’s suggestion that changes to Libya’s political structure can be imposed by unilateral declaration.”

European Union spokesman Peter Stano said “any attempt to push forward unilateral solutions — even more so by force — will never provide a sustainable solution” for Libya.

The GNA said Haftar had “turned his back on the parallel political institutions that backed him and designated him” head of the army.

“Haftar is now demanding that (parliament) submit entirely to the army, whether by common accord or by unilateral force,” said Jalal Harchaoui, a researcher at the Clingendael Institute in The Hague.

Like Libya itself, lawmakers are divided between those who support Haftar and those in Tripoli who oppose him.

On Tuesday, the GNA invited “those lawmakers remaining in the east to rejoin their colleagues in Tripoli to resume dialogue and relaunch the political process”.

But Harchaoui said few elected officials in the east were likely to rejoin the anti-Haftar lawmakers in Tripoli.

Emad Badi, a Libya analyst at the Atlantic Council, said Haftar hoped to establish himself as the only power in eastern Libya and oust any actors in favour of dialogue.