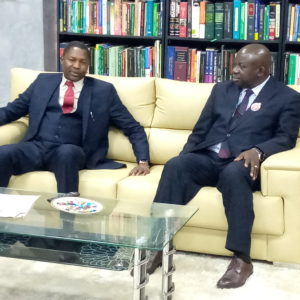 The Attorney General of the Federation and Minister of Justice Abubakar Malami, SAN, has disclosed that the Federal Government has commenced investigation into the incident that happened between the operatives of the Department of State Service (DSS) and Omoyele Sowore, Convener, #RevolutionNow protest, at the Federal High Court, Abuja.

Malami made the disclosure on Wednesday while speaking with newsmen shortly after he visited the Chief Judge of the Federal High Court, Justice John Tsoho and the President, National Industrial Court of Nigeria, Benedict Kanyip.

News Agency of Nigeria (NAN) recalls that the DSS operatives had rearrested Sowore after the court proceeding on Dec. 6.

He, however, said his visit to the Chief Judge was not over Sowore’s case but to congratulate Justice Tsoho on his confirmation by the Senate as the substantive Chief Judge of the Federal High Court.

“(Sowore’s case) is not the only case that the Federal Government is involved. We have multiple cases and more serious cases than that of Sowore pending.

“Generally, the case of Sowore is certainly not an exception. So, I cannot be here for an exclusive case,” he said.

Asked if he was worried by the DSS’ conduct, Malami said, “Whatever affects the integrity of the court is a worrisome issue for us.

“But then, I can never be preemptive of an incident over which I was not a live witness.

“But one thing I am certain of is that the government has put in place mechanism for investigation of the reported incident.

“So, I would not like to be preemptive in terms of a conclusion, one way or the other, without allowing the consummation and conclusion of the investigation process.”

Also responding to questions on the matter, he said, “I think it is about commitment to the sanctity of the judiciary and the judicial system.

“As a government, we have established a tradition of respect and interest to the independence of the judiciary.”

The minister also paid a courtesy visit to the President, National Industrial Court of Nigeria, Benedict Kanyip, on his confirmation as substantive head of the court.

Malami pledged the Federal Government’s support to Kanyip towards achieving his mandate.

Kanyip, who thanked the minister for the visit, said the major challenge facing the court was how to reduce the trial time because justice delay is justice denied.

He assured the minister that the court would continue to live up to its expectation on labour and employers’ related matters. (NAN)