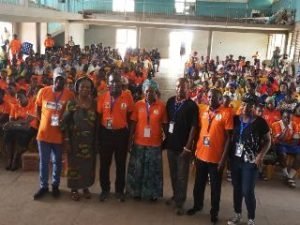 African Clean-Up Initiative (ACI) in collaborating with Coca-Cola Company has sensitised 90 schools in Lagos under Education District 1 on `Turning Waste to Wealth’ programme.

Mr Alexander Akhigbe, the Chief Environmental Officer, African Clean-Up Initiative (ACI), made this known during a sensitisation programme organised for 90 schools under District 1 in Agege, Lagos on Thursday.

He said that ACI partnered with Lagos District 1 to extend the recycling pay programme which had been assisting less privileged private schools’ parents to pay their children’s school fees with the support of Coca-Cola Company and other stakeholders.

Akhigbe said that ACI, a Non-Governmental Organisation (NGO), was aware that public schools in Lagos were not paying school fees but they could convert the money raised at the recycling clubs in various schools to meet their needs.

“The idea is to encourage students to be more responsible in taking care of their environment and sorting their waste, which will make them to get something in return.

“People now keep to recycling when they know that they will get something in return and we are also extending the programme to other five districts in Lagos State to support the Lagos State Government to achieve its aim of Cleaner Lagos.

“We are going to work with the 90 schools present today and we are introducing Recycle Spray Cup to motivate them and we will also profile the best recycling contributors’ school on our platform and magazine,” Akhigbe said.

He said that ACI would come and pick up the recyclable products that would be converted to money.

The Tutor-General/Permanent Secretary, Education District 1, Mrs Margaret Solarin, urged the students to tap the idea of Turning Waste to Wealth of Africa Clean-Up initiative to enable them plan for their future.

Solarin who was represented by Director, Science and Technology, District One, Mrs Mary Oyetunde, said that the project would earn them safe money for their future educational expenses.

According to her, the initiative by ACI with the theme “Turning Waste to Wealth’’ is a way of allowing the students to make use of their talents, especially in the art sector which will enable them to be exposed to artistic way of turning waste materials into interior decorations.

She said that continuous encouragement would enable the students to show more interest.

She noted that the state government was interested in the programme to enable the state achieve cleaner Lagos project.

Solarin said that government had plans to engage in recycling exhibition by encouraging the recycle clubs and the idea would also enable students to be more productive than engaging in violence.

Akinode said that they were able to harness with some Non-Governmental Organisation (NGO) like ACI, I Recycle, Bead God Recycle, to help 90 schools under district I which comprised Agege, Ifako-Ijaye and Alimosho.

He said that apart from having opportunity of living in a healthy environment, it would motivate thestudents to be more creative, sell to other people and make money for their living.

Akinode said that ACI officials would visit each school six times in a session and convert all the recyclable products into money to equip recycle clubs.

The News Agency of Nigeria (NAN) reports that I Recycle and Bead God Recycle engaged the students in different ways of recycling waste products into interior decorations. (NAN).