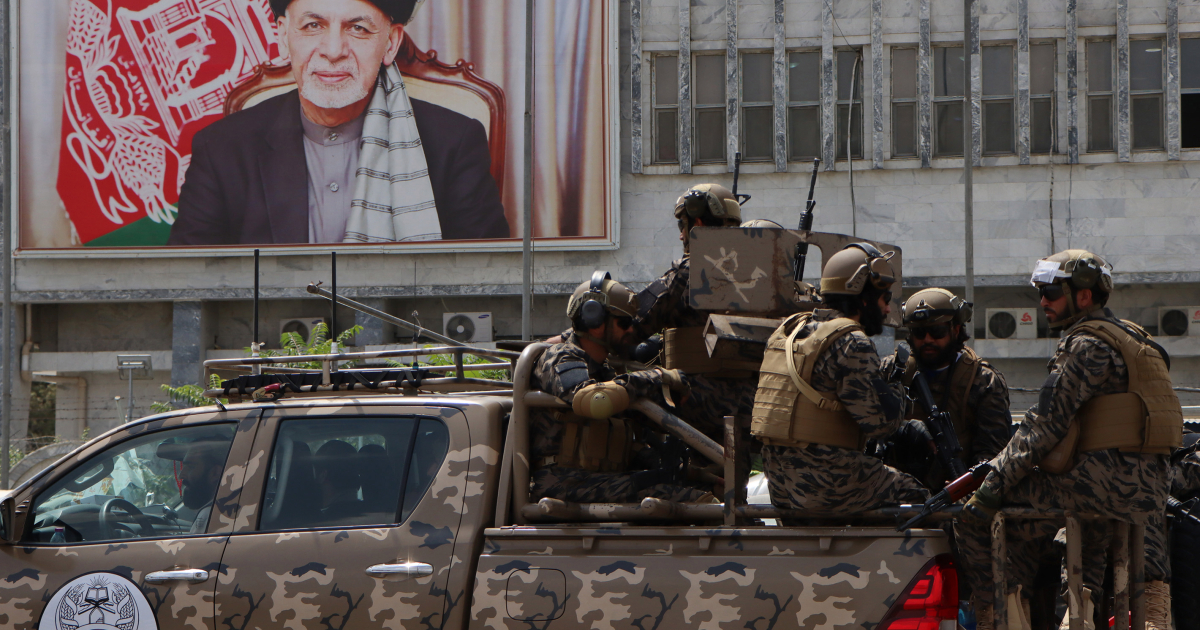 Kabul, Afghanistan – In the early hours of Tuesday, hails of gunfire filled the skies above cities across Afghanistan as the Taliban celebrated the final withdrawal of foreign forces after a 20-year US-led occupation of the country.

Just after midnight local time, US Central Command Commander, General Kenneth McKenzie, declared, “Every single US service member is now out of Afghanistan.”

With those 10 words, McKenzie brought an official end to Washington’s longest-ever foreign incursion. As the final US military plane departed Kabul’s Hamid Karzai International Airport, the Taliban looked on in triumph.

Taliban spokesman, Zabihullah Mujahid, took to Twitter, writing: “The last American occupier withdrew … at 12 O’clock and our country gained its full independence, praise and gratitude be to God.”

Members of the group spent the rest of the early morning hours of Tuesday in an ecstatic state of revelry, firing round after round into the pitch-black sky. They had defeated the foreign forces that had hunted them for 19 years.

By sunrise, though, it became clear to the Afghan people that the dawn had brought with it an uncertain future. After two decades of foreign occupation, the nation, currently being led by the Taliban, will be left to face the security threat of the Islamic State in Khorasan Province, ISKP (ISIS-K), an armed group, and potential economic insolvency with no indication of foreign assistance.

Although everyone Al Jazeera spoke to in Kabul and Kandahar were happy to see an end to the war, many feared for the immediate future, with the economy as the most pressing matter.

While the Taliban were in a celebratory mood, many Kabulis spent Tuesday in the manner they had spent the last week, waiting for hours in line outside banks, desperate to withdraw cash from automated teller machines, many of which remain switched off.

Omid, 26, said more than the absence of foreign forces, Afghans are concerned about being able to put food on the table in the coming days. He pointed to a line stretching for hundreds of metres outside the Azizi Bank branch near the Presidential Palace as proof of that very real fear.

“They’re all out here to buy flour and feed their families, but every 100 people that make it in, 2,000 others will go home empty-handed.”

He, like so many others in line, knows that the lack of cash in Afghanistan’s financial institutions is the result of decisions made by international bodies. The World Bank, International Monetary Fund, US Federal Reserve and Western Union all abruptly cut ties with Afghanistan once the Taliban seized control of the capital in mid-August. According to the World Bank, foreign aid accounts for about 40 percent of Afghanistan’s GDP.

Omid’s concern is echoed by Afghans across the country, who say their greatest fear at the moment is poverty. The Afghans Al Jazeera spoke to said it is imperative that foreign nations and international organisations start to engage with the Taliban.

Omid, now in his final year of medical school, was only five when the US invasion began. He says he could not have imagined the foreigners ever leaving Afghanistan. But now that the Taliban has taken over, he says he will find a way, any way, to leave Afghanistan.

“I will leave. I have no other option,” he said. But with the Kabul airport in disarray and most embassies evacuated, getting out will not be easy.

Earlier in the morning, dozens of men and women lined up along the street leading to the embassies of Turkey and the United Arab Emirates, where the Taliban stood guard, trying to communicate to the people that the few embassies that remained open are very strict about who they see.

Despite the difficulties, Omid is determined to try to get out of Afghanistan any way he can.

“They gave us pens and taught us about freedom, and then just as quickly, they took it all away,” he said in reference to the February 2020 agreement between the US and the Taliban that paved the way for the US withdrawal.

Mansour, a money exchanger who works on a street corner near three banks and rows of clothing and electronic stores, said he supports the Islamic Emirate, as the Taliban calls its yet-to-be formed administration, but does not have much faith that things will improve soon.

“Afghanistan is the only country in the world where things go backwards,” the 20-year-old told Al Jazeera.

“They came with all of these promises, but they are leaving Afghanistan just as when they came, under the control of the Taliban,” he says. “Other than these new buildings and high-rises, it’s the same city it was when the infidels arrived.”

Though Afghans often complained of the fraud, corruption and nepotism that plagued the governments headed by Hamid Karzai and Ashraf Ghani, some young people fear that the way of life they once knew may now be gone.

Massoud, 33, runs a shoe shop in one of Kabul’s main commercial districts. Late Tuesday morning, as another young man was praising the Islamic Emirate and saying the people of Afghanistan must now embrace them, Massoud was shaking his head.

Wearing a blue baseball cap, a grey t-shirt and blue jeans, Massoud clearly stood out from most of the other men out on the streets of Kabul. Since the group took over on August 15, most men have appeared in public wearing the traditional piran tomban over jeans, t-shirts and track suits.

“The former governments were full of corrupt thieves, but now, we have no freedoms,” he said from his empty store. Though he sold mainly shoes and slippers, Massoud said he has already been threatened by the Taliban for the way he dresses and what they presume his store represents, culturally.

“They told me I won’t be able to carry on like this for long,” he said.

Habib Faizi, a civil engineer in Kandahar, expressed similar fears, “Today is the day that life in Afghanistan came to an end,” he said. Faizi feared that the Taliban will not be able to lead a government. Most importantly, he feared an impending “economic crisis.” He said such a crisis would only increase crime and insecurity, two things the Taliban has always claimed to reduce in areas under their control.

Faizi said he blamed US President Joe Biden for the situation in the country.

“I am really angry at the US government and Biden. He never should have surrendered the fate of millions of Afghans, and the democracy they created, to the Taliban,” he said.

But amid the uncertainty, there are some people who are supportive of the Taliban in Kabul and other cities.

Karimullah Safi, 35, said the Afghan people should not only be happy, but proud, that they were able to bring down the world’s only remaining super power after 20 years of bitter war. Safi said he understands the fears of his peers, but that they should come out onto the streets and see the situation for themselves.

“Of course, people are scared, where else in the world does a government fall overnight and the group that has been fighting them for 20 years takes over right away,” he said. Safi said the media’s portrayal of the Taliban during the last two decades only exacerbated people’s fears.

“People need to come out and see these people with their own eyes, as we have.”

Safi said people’s worries can only be assuaged if they make the effort to return to normal life, something which will also force them to engage with the Taliban.

“Look, they fought for 20 years, but since they took over, the war has stopped, the violence has ended. Things are slowly returning to normal,” he said.

Khan Mohammad, a pharmacist in the city of Kandahar, said that August 31 will go down as an auspicious day not only for Afghans, but Muslims the world over.

“The US and their backers destroyed the ideology of our people,” Mohammad said. Like other Afghans Al Jazeera spoke to in Kabul and Kandahar, Mohammad was especially critical of the lack of transparency in the Karzai and Ghani-led governments.

“They turned us into one of the most corrupt nations in the world,” he said echoing a popular sentiment among Afghans.

He expressed special anger for the reliance of the foreign coalition and the Kabul government on nighttime raids into people’s homes and air raids, both of which were known to cause civilian casualties.