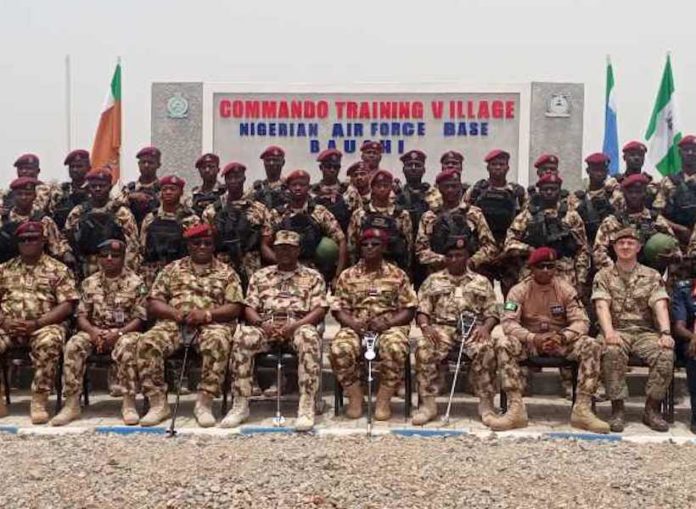 Daramola said: “Out of the 285 personnel nominated for the course, only 150 were found fit after a series of medical and physical screening and inaugurated to commence the course.

“At the end of the course, 145 personnel, comprising three officers and 142 airmen will be graduating today (yesterday) and they have been found worthy in character and learning to qualify as Advanced Special Forces Operatives, also known as Nigerian Air Force Panthers.”

The AOC, Ground Training Command said that the Special Forces operations are characterised by speed, precision, destabilising shock effects and perseverance of forces which require that these Special Forces operations are painstakingly selected to ensure the attainment of desired effects and outcomes.
He adds: “The kinds of effects that Special Forces operations are able to deliver are very critical at this material time, considering the fact that present threats to our national security are from violent non-state actors waging terrorist and insurgent campaigns against the Government of the Federal Republic of Nigeria. As such, these newly bred operatives would be employed as part of our offensive to ensure normalcy and calm are restored to restive communities within Nigeria.

“Ground Training Command remains resolute in ensuring qualitative training to enable us to have the best quality, as well as the right numerical strength of personnel to prosecute the fight against terrorism and insurgency working in synergy with sister Services and other security agencies.”

According to him, in equipping them for the task ahead, some of the curricula of the Advanced Special Operations Course entailed counter improvised explosive devices training, air-to-ground integration, remotely piloted aerial systems training, close quarter battle drills, among others, emphasising that, “as expected, the course was intentionally made tough to ensure that our trainees can withstand the gruelling physical conditions of ground operations.”

In his speech, the Chief of Air Staff, Air Marshal Oladayo Amao, expressed optimism that the graduating students have imbibed the necessary skills, tactics, techniques and procedures required to conduct special operations pursuant to achieving the operational objectives of the Nigerian Air Force.

Amao, who was represented by the Chief of Policy and Plan, Air Vice Marshal Charles Ohwo, said that in furtherance of his vision of enhancing and sustaining critical airpower capabilities required for joint force employment in pursuit of national security imperatives, the Nigerian Air Force has so far trained about 5,000 Regiment and 2,000 Special Operations Forces personnel.

Amao said the 150 graduating students of the Advanced Special Operations Course 1/2022 are however the first set of personnel to undergo in-Country Advanced Special Operations training, adding that the NAF’s ability to train this large number of personnel at a reasonable cost was possible because the training was conducted in Nigeria.”
Also speaking, the Commander, British Military Advisory Training Team, Col. Rory Shannon, described the United Kingdom’s relationship with Nigeria and with its military as “deep-rooted and very strong.”

Shannon said, “At the Security and Defense Dialogue that was held between the United Kingdom and Nigeria’s Armed Forces and other Agencies in January of this year, our Chief of Defense Staff Spoke reiterating a desire to strengthen links between our militaries including in this particular area.

“The Nigeria-UK relations is hugely important. The deployment of what we’ve conveyed here will help save lives and defeat a common enemy. So, I know that there are continuing close cooperation, we will continue to contribute to improving the security situation.”

The Advanced Operatives Course has helped develop the foundation, building on previous training, and setting participants and students up for much more effective counter-violent extremists operations in North-East Nigeria, the Lake Chad Basin and other troubled areas.