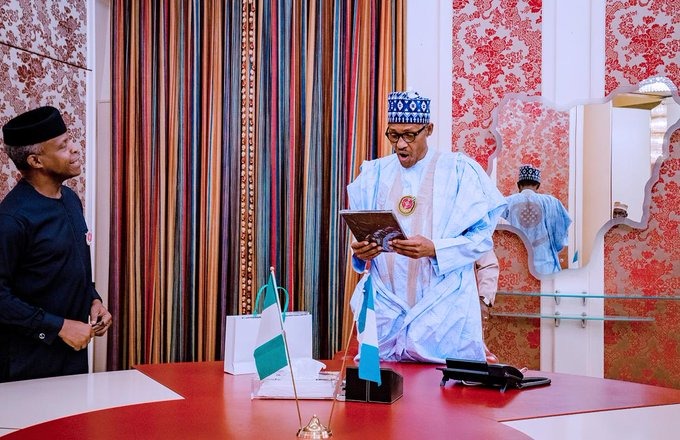 Mr Peter Ogundeji winner of a short quiz about a gift presented to President Muhammadu Buhari in December 2019 by Vice President Yemi Osinbajo told the VP at the meeting “in my state, they call me Buhari’s son.”

The 35 year-old graduate of Microbiology from the Ladoke Akintola University of Technology, Ogbomoso met with the Vice President on Thursday in his office.

He told Osinbajo that “In my state, people call me Buhari’s son because on my Facebook page, for the past one year, most of what you see is Buhari and your picture. Even my meeting you today, if they hear about it, they will say it is because I am Buhari’s son, I am really grateful, sir,” he continued.

The meeting was in fulfillment of the promise made by Mr Laolu Akande, the Senior Special Assistant to the President on Media & Publicity in the Office of the Vice President, who initiated the quiz.

Mr Akande had tweeted in December: “The VP presented a gift to Mr. President. Who can guess what the gift is about, eliciting the kind of response captured by Tolani Alli (Tolani Alli is the VP’s official photographer who shot the photo used for the quiz). The first winner gets a date to meet the VP next month,”.

According to Mr Ogundeji – one of the many enthusiasts of the Buhari administration, “In my State they call me ‘Buhari’s son. Meeting the Vice President today is going to be a life time experience that will forever linger in my memory. In fact, I couldn’t believe my own self having a one-on-one talk with him.

“I also appreciate the fact that he asked about what I do for a living and promised to see how he could assist to improve my business.”

The company is into Oil palm processing with a weekly production capacity of five tons, which can be increased to 10 tons per week, given stable supply of power.

Mr Ogundeji believes that his factory can employ up to 10 workers if it gets the necessary lift to increase production to 10 tons per week.