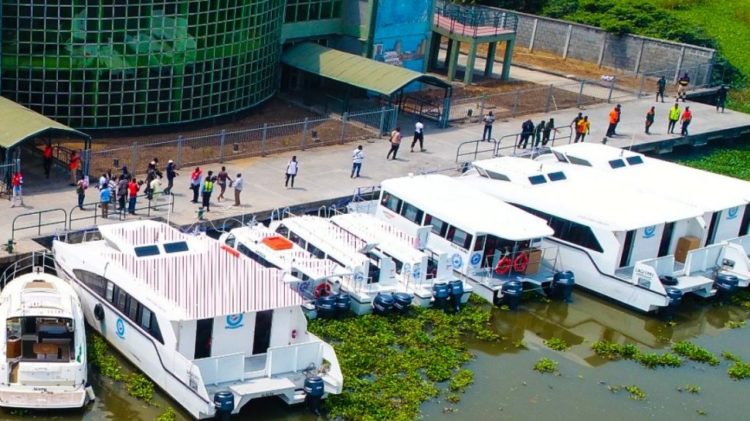 By Adebola Adegoke/Mariam Akande
Some commuters using the Ikorodu Ferry Terminal have called on the Lagos Ferry Services Company (LAGFERRY) to improve its services and provide more boats for its growing patrons.

They spoke in separate interviews with the News Agency of Nigeria (NAN) on Friday in Ikorodu, Lagos.

NAN recalls that the Lagos State Government promised to deploy more boats and high capacity buses to cushion the effect of the ban on commercial motorcycles and tricycles.

Since the ban on Feb.1, the number of commuters using the waterway has increased significantly.

NAN also reports that the 14 ferries are currently operating of which seven are stationed at Ikorodu ferry terminal.

Mr Tunde Aluko, a ticketing agent at Ikorodu terminal, confirmed that there had been tremendous increase in the number of people using the waterways on daily basis.

Aluko called on other stakeholders to invest in water transportation to ease traffic on the roads and ensure improved services on the waterways.

“On a daily basis, we are recording over 100 passengers in the morning.

“However, we need more boats to service other routes such as Ikorodu to Apapa, CMS to Ikorodu and others.

“We also need more people to invest in water transport because it will encourage more people to use the waterway and ease the traffic on the road,” he said.

Mrs Kelechi Alogba, a passenger, advised that government should adopt strategies used by the local boat operators to improve the services of LAGFERRY.

“The boats are not enough if they are really looking at expanding waterway transportation and I think they can do better.

“The LAGFERRY operators are overwhelmed and are a bit disorganised in their operations, especially in ticketing.

“The local boat operators have been operating for years and they are much organised.

“I will advise that they understudy the local operators and replicate their system to improve their services,” she said.

Mrs Ogunsanya, also a passenger, advised that the government should invest more in smaller boats that would take passengers to their destinations in due time.

Mr Amara Sesay, another passenger, called on the government to adopt better management method for safety and satisfaction of everyone.

According to him, this will boost the confidence of passengers and ultimately help government to achieve its goal in traffic management,

Another passenger, who simply identified herself as Bolanle, called for a system that would allow for a difference in child fares from adult fares on all the modes of transportation in Lagos State.

“How can Lagos State run a ferry service and Bus Rapid Transit and still charge the same amount for children?

“There should be child fare on all the modes of transportation if they are truly building a smart Lagos,” she said.

Mr Zakari Yekini, the terminal manager, decried the constant dredging activities in the area, which he said, was a major challenge.

“We need to clear the debris in the waterways and shut down the activities of dredgers in the area.

“There are about five dredging companies in the area and we have taken it up with relevant authorities.

“They were told to be 50 meters away from the jetty, but right now they are 20 meters away and this may have negative effects in the future.

“We pray their actions will not lead to accidents that could have been avoided,” he said.