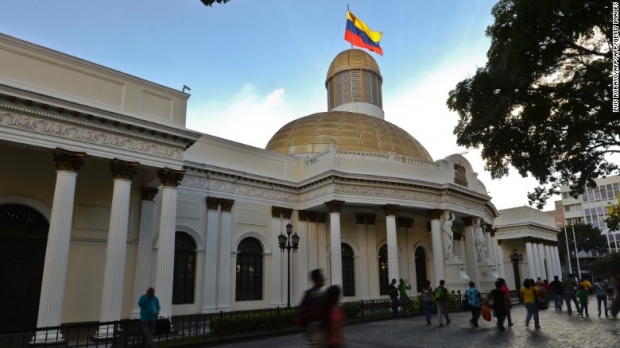 (dpa/NAN) Venezuela’s National Assembly approved two separate speakers in two separate votes on Sunday, after opposition lawmakers held their own vote when they were locked out of the parliament session.

The chaotic day left it unclear, who would lead the National Assembly, with an official but disputed vote picking Luis Parra, who is backed by embattled Venezuelan President Nicolas Maduro.

The opposition lawmakers re-electing self-declared interim president, Juan Guaido, as the leader of the body.

Parra won with the votes of the Socialist Party of President Nicolas Maduro and defectors from the opposition coalition and reportedly received 84 votes.

But this came after security forces prevented opposition leader Juan Guaido and several dozen, other opposition lawmakers, from entering the building to have their say, according to local media reports.

Guaido’s supporters claimed the correct protocol was not observed, with Guaido himself telling VPI TV “there was no nominal vote’’, in comments outside the government building.

Independent media were also shut out from the session.

Opposition lawmakers reconvened at the offices of a local newspaper and voted a second time.

By that count, Guaido received 100 votes and the opposition declared him the winner.

The National Assembly has 165 seats.

U.S. Secretary of State, Mike Pompeo, congratulated Guaido on his victory in a tweet.

Until December, Parra was a member of the opposition party Primero Justicia, which is part of the Guaido coalition.

He was expelled from his party after opposition representatives accused him of trying to win the votes of other lawmakers for Maduro in exchange for money.

Guaido was elected president of the National Assembly at the beginning of last year because his opposition Voluntad Popular party had the rotating chairmanship of the parliament.

Many countries, including the U.S. and EU states, subsequently recognise Guaido as a legitimate interim president.

However, despite international support and massive demonstrations in Venezuela, he did not succeed in ousting Maduro from office.

This is in large part because Maduro still has the support of the powerful military. (dpa/NAN)