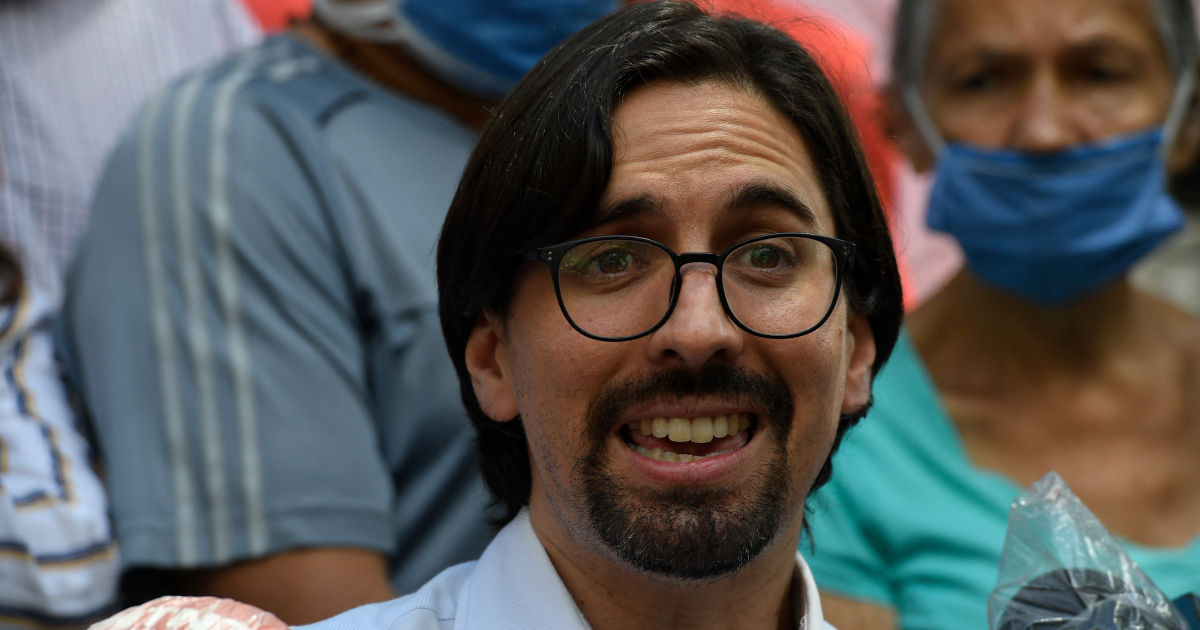 Venezuelan prosecutors have announced “terrorism” and “treason” charges against a prominent opposition politician after intelligence agents arrested him from his car on a Caracas highway.

In a statement on Monday, Attorney General Tarek Saab said that Freddy Guevara was detained by members of the Bolivarian National Intelligence Service (Sebin) due to “his links with extremist and paramilitary groups associated with the Colombian government”.

“He will be charged with the crimes of terrorism, attacks against the constitutional order, conspiracy to commit a crime and treason,” the statement said.

Guevara, a close ally of opposition leader Juan Guaido, posted on social media from inside his car as secret police intercepted him on a Caracas highway.

“Greetings to my family, I am very sorry that you are going through this suffering, I hope it is brief,” the 35-year-old said in a live broadcast.

A spokesperson for Guaido’s office said Guevara, who was pardoned less than a year ago on 2017 charges of instigating violence, was taken to the Sebin intelligence service’s Helicoide prison in Caracas.

The attorney general did not specify where he was being held.

Separately, Guaido also said unidentified armed men threatened him with arrest earlier on Monday as he tried to leave his apartment in an effort to assist Guevara.

Videos circulated by his office showed at least two men with bulletproof vests and balaclavas in the basement of Guaido’s building approaching his car and pointing assault rifles.

One of the men opened the driver’s door and forced the driver onto the ground, yelling “Get out!,” the videos showed.

Venezuela’s information ministry did not respond to a request for comment.

The incidents took place as the Venezuelan government and opposition prepare for negotiations planned for next month in Mexico with mediation by Norway, people familiar with the matter told the Reuters news agency last week. The talks are aimed at resolving the South American country’s deep political crisis.

President Nicolas Maduro, in an appearance on state television on Monday, confirmed the negotiation plans but said the opposition should renounce violent tactics ahead of the talks. Without naming Guevara or Guaido, he said he had proof some actors were plotting coups and said that prosecutors acted on the basis of that proof.

“I agree with the Mexico and Norway table, but there must be conditions, there must be an express renunciation of violent practices,” Maduro said.

The Venezuelan government has previously linked Guevara and his political mentor Leopoldo Lopez, who is now exiled in Spain, to violent clashes last week in a Caracas neighbourhood that left at least 26 dead.

“They want to disguise themselves as democrats,” but “they ally themselves with criminals,” Maduro said without directly mentioning Guevara’s case.

“Some of these sectors … we have pardoned them from previous causes, but they are pardoned … and they immediately join in looking for criminals, paying for violent groups and preparing assassinations,” he said.

The United States-backed opposition labels Maduro a dictator, alleging he rigged his 2018 re-election and uses the justice system to stifle dissent. But Maduro, who retains the support of the military, denies that the election was rigged, and has accused Guaido of conspiring with the US to remove him in a coup.

‘Threats are not going to stop us’

Reporters arrived on the scene minutes later and neighbours gathered in protest around two white, unmarked trucks with men bearing bulletproof vests and assault rifles, some in balaclavas sat inside.

Others wore hats that said DIE – the Spanish acronym for the Directorate of Intelligence and Strategy police unit.

Shortly afterwards, an unmarked grey Toyota truck filled with police raced out of the garage in the basement, leaving the residential complex.

Guaido then emerged from an SUV and told reporters that the men had left. He said it was unclear which branch of the security forces they belonged to.

“They intercepted us and pointed their weapons at us, in the basement,” Guaido said.

The US denounced the actions against Guevara and Guaido.

“We strongly condemn the arrest of Venezuelan Congressman Freddy Guevara and threats against Interim President Juan Guaido in Venezuela,” Julie Chung, the acting assistant secretary for the US Department of State’s Bureau of Western Hemisphere Affairs, wrote on Twitter.

She urged the international community to join in condemning the acts and called for the release of all political prisoners in Venezuela.