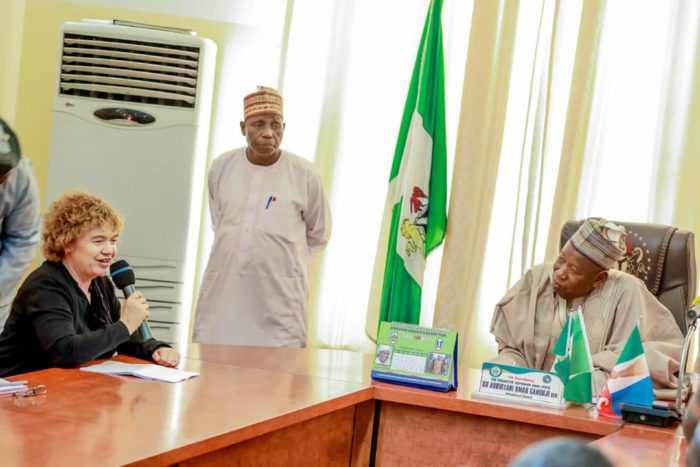 Ties
By Muhammad Nur Tijani
The United Kingdom has expressed its readiness to deepen and stregthen relationship with traditional partners in the commonwealth after exit from European Union.

The UK High Commissioner to Nigeria, Amb. Catriona Liang, expressed the country’s desire when she paid a courtesy visit to Gov. Abdullahi Ganduje at the Government House, Kano.

“I think we are in a very good period at the moment because with the new government in the UK under Prime Minister Boris Johnson we are in a journey of re establishing and strengthening relationship with traditional commonwealth partners in Africa particularly Nigeria.

“Nigeria is always important to relationship in Africa, we put our money where we have our biggest mission, we have 500 people working for us, 300 in Abuja and 200 in Lagos and another 30 or so in places like Kano,” she said.

According to her, the previous Prime minister visited Nigeria few years ago and that she has been given clear instructions to deepen and strengthen the relationship and partnership.

Liang said that one of her major jobs was to follow up to the UK -Africa summit, with focus on commerce and economic side of it.

Speaking on Kano, the high commissioner said that the country would focus on three broad areas; governance, human development and economic growth.

She said that the UK would slightly shift the way it worked in the country, saying that it was going to develop the concept called “neutral accountability”.

“We are commending the governor for his efforts in human development. This is very encouraging. It is noteworthy to understand that we are strengthening our ties with African states.”

“We are also looking at agriculture, the main stay of your state economy. Ours is to always strengthen our ties. It is known that Kano state has a long standing relationship with our country,” she said.

Ganduje solicited for stronger synergy between the state and United Kingdom, hinting that policies around the sectors were deeply entrenched to have great impact on human development.

“In the area of education, we came up with this policy, which we know is a heavy-loaded policy statement, which needs all hands on deck.

“We all believe that with the right education, these issues of insecurity and joblessness would come to pass.

“We also understand that education is a right to each and every citizen.

“That is why we have a Law in place that whoever fails to take his child or children to school is committing an offence,” he said.

“The issue of the integration of Almajiri system into our conventional education system is another task that must be accomplished. That is why we are also taking this matter very seriously.

“In the area of agriculture I am informing you that apart from making sure that we maximize our production, we are doing our best to also see that farmers get all the necessary support to do well in their farmlands,” he said.

According to him, the support comes from good and people-oriented agric policies to provision of quality seeds, other implements among others.

Ganduje urged United Kingdom to help hand in propelling and supporting the noble programme that would address the issue of out-of-school children with all seriousness and determination.