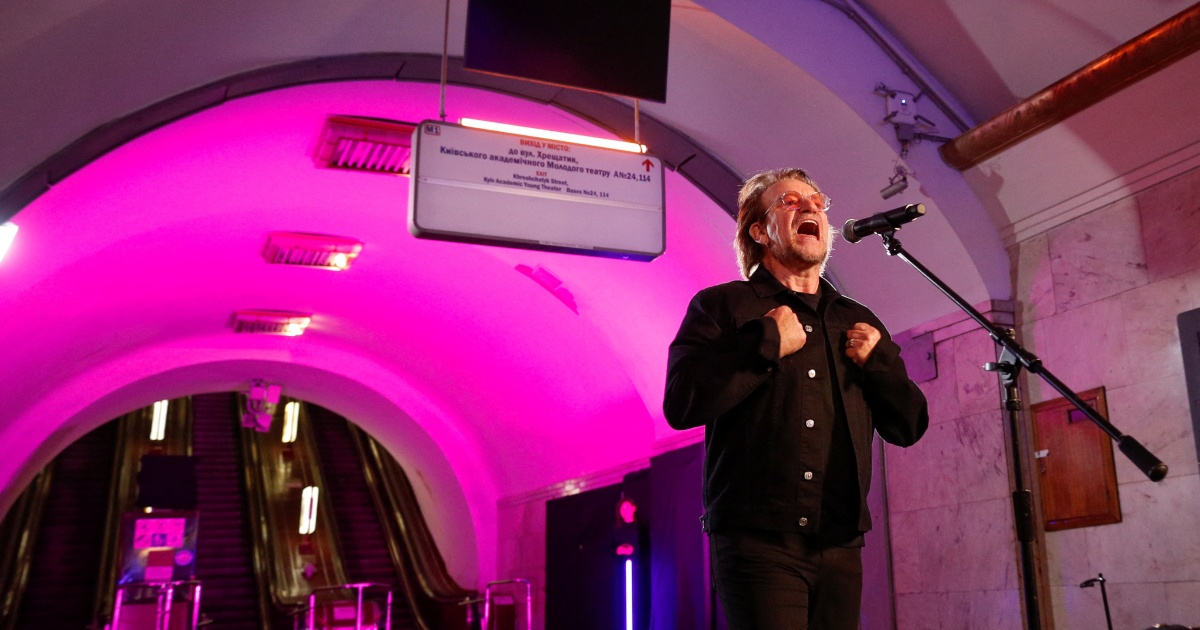 The legendary Irish rock band said President Zelenskyy invited them to play in solidarity with Ukraine.

Irish rock band U2’s singer Bono and guitarist The Edge have performed a 40-minute concert in a metro station in the Ukrainian capital of Kyiv in support of Ukrainian forces fighting Russia’s invading army.

On its Twitter account, the world-renowned band said President Volodymyr Zelenskyy invited them “to perform in Kyiv as a show of solidarity with the Ukrainian people and so that’s what we’ve come to do”.

“Your president leads the world in the cause of freedom right now… The people of Ukraine are not just fighting for your own freedom, you’re fighting for all of us who love freedom,” Bono told a crowd of about 100 gathered inside the Khreshchatyk metro station.

“We pray that you will enjoy some of that peace soon.”

President @ZelenskyyUa invited us to perform in Kyiv as a show of solidarity with the Ukrainian people and so that’s what we’ve come to do. — Bono and The Edge #StandWithUkraine

Bono, alongside The Edge, sang the Ben E King classic Stand By Me. The set also included performances of With or Without You, Desire, Angel of Harlem, and Vertigo.

Ukraine musicians and soldiers joined the duo on stage at times during the show.

“I am grateful to [Bono, U2] for supporting our people and drawing even more attention to the need to help our people,” Zelenskyy said in his nightly video address.

Russia, which calls its action in Ukraine a “special military operation”, continues to carry out missile attacks across Ukraine. However, some life has returned to Kyiv even though air raid sirens sound regularly.

Bono rallied the crowd between songs during the performance.

“This evening, 8th of May, shots will ring out in the Ukraine sky, but you’ll be free at last. They can take your lives, but they can never take your pride,” he said, quoting the U2 song Pride (In the Name of Love).

On his trip, Bono also visited Bucha, a town near Kyiv where hundreds of bodies were found last month after Russian troops withdrew from the area.

Ukraine and its allies have accused Russia of war crimes in the city.

Moscow has vehemently rejected the allegations that Russian forces were responsible for killing civilians in Bucha and suggested images of corpses were “fakes”.

Russia’s military campaign in Ukraine has killed thousands of people and forced more than 12 million people to flee their homes, including almost five million abroad.