Turkey keeps US, China on toes for lucrative arms market in Africa 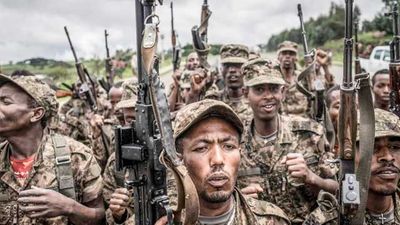 Geopolitics, imports of military hardware, security and Covid recovery topped the agenda in the most recent Turkey-Africa Partnership Summit held in Istanbul.

As Turkish President Recep Erdogan sat down with a host of African leaders on December 18, his country’s military dealings with the continent was top of the agenda.

African leaders and Ankara adopted a joint declaration that committed them to “further strengthen and deepen the co-operation in the interest of the states and peoples.”

Kenya, Uganda, Ethiopia, Nigeria, Tanzania, Rwanda and Somalia are some of the Eastern African countries that have defence pacts with Ankara, offering a market for rifles, tankers and drones.

Turkey has, in the past two years, deepened ties with the continent, which has resulted in signing several trade and defence pacts. So far, it has signed 16 agreements with African countries as it seeks to make the continent its third-largest export market for defence equipment. The country is renowned for its manufacture of helicopter engines, armoured land vehicles, rockets and missiles, light weapons and defence software.

For the continent, Turkey offers competitive prices for its military hardware, with a no-strings-attached policy. Ankara already has a military base in Somalia and Morocco.

Its latest sales to Addis Ababa, which is currently quelling a civil war in the northern region of Tigray, didn’t go unnoticed. In August, Turkey signed a military co-operation deal with Ethiopian Prime Minister Abiy Ahmed, and sent an unspecified number of drones to Addis, which has been credited with tilting the war in favour of Mr Abiy.

But Ankara has since responded to international pressure and halted the sales. “Ethiopia can buy these drones from whoever they want,” Turkey’s Foreign Ministry spokesman said in October, neither confirming or denying the sales.

Turkish defence and aviation exports to Ethiopia rose to $94.6 million between in the 11 months to November 2021, up from around $235,000 in the same period in 2020, according to figures published by the Turkish Exporters Assembly. Sales to Angola, Chad and Morocco experienced similar jumps.

“Everywhere I go in Africa, everyone asks about UAVs (unmanned aerial vehicles),” President Erdogan said after his October 2021 African visit that featured Angola, Nigeria and Togo.

For Ankara, successfully courting the continent means upsetting Russia, America and China, which have been the dominant players on the African arms market, accounting for three-quarters of the continent’s imports between 2015 and 2019, according to the Stockholm International Peace Research Institute (Sipri).

Sipri’s latest data shows that China’s share of defence imports by sub-Saharan countries rose to 29 percent in 2019, from 12.1 percent a decade before.

Beijing has since become the second-largest arms supplier to the continent, behind the US, followed by Russia, with France and Germany also having a sizeable market share.

In East African, Uganda, Kenya and South Sudan are Beijing’s biggest arms customers. According to security analysts, the African defence market is now of importance to China, as it has accounted for close to a quarter of its global military exports in the past eight years.

“Close to two-thirds of African militaries operate Chinese equipment, with close to a dozen new players emerging to supply this market. Their equipment is becoming more sophisticated. They can also be delivered at lower prices and far more quickly than that from other suppliers,” said Joseph Dempsey, a research analyst at the Military Balance, a global defence think tank.

“The most important sector is the defence sector because this is a new asset. Turkey has pushed this sector a lot, especially drones,” Federico Donelli, an international relations researcher at the University of Genoa, said.

The TB2 Bayraktar model is in high demand after it was credited with swinging the fate of conflicts in Libya and Azerbaijan’s breakaway region of Nagorno-Karabakh in the past few years. The drones are made by the private Baykar company, run by one of Erdogan’s sons-in-law. Turkey’s drones first made international headlines after Ankara signed two deals with the UN-recognised Libyan government covering maritime and security in 2019.

It then swarmed the conflict zone with drones, stalling an advance by rebel eastern forces backed by Turkey’s regional rivals and paving the way for a truce.

It cemented its drones’ reputation by helping Azerbaijan recapture most of the land it lost to separatist ethnic Armenian forces in disputed Nagorno-Karabakh nearly three decades ago.

“Now Turkey, with drones, has more cards to play when they have to bargain with other countries,” researcher Donelli said. “This is a very good bargaining chip for Turkey.”

But the head of Turkey’s Foreign Economic Relations Board — the NGO that hosted the October forum in Istanbul — insisted the growing relationship was not just about weapons.

“We care about the defence sector and our relations with Africa,” the board’s head Nail Olpak said. “

But I would like to emphasise that if we see the defence sector only as weapons, rockets, guns, tanks and rifles, it would be wrong.”

He highlighted Turkish mine-clearing vehicles in Togo, which qualify as defence industry sales.

Donelli agreed, referring to Togo’s plans to improve its army with the support of Turkey through training and armoured vehicles, weapons and other kinds of equipment.

Turkey and Africa have committed to cement their collaboration on current issues in the global arena, including health, peace, security, governance, and justice.

This will see Turkey and Africa, through the African Union, focus on three main sub-themes: peace, security, and justice; human-focused development; and strong and sustainable growth.

“These sub-themes will be implemented under five strategic cooperation areas through a joint action plan from 2022 to 2026: Peace, security and governance; trade, investment and industry; education, science-technology-innovation skills, youth and women development; infrastructure development and agriculture; and promoting resilient health systems,” said a communique from the meeting, outlining an action plan with concrete actions to be

implemented by the parties.

Turkey has also signed an MoU on cooperation with the Secretariat of African Continental Free Trade Area.

“We will continue to cooperate with Africa on several issues, including reducing poverty, development and epidemics. With this summit, we have crossed a vital threshold in Turkey-Africa relations,” President Erdogan said.

“Africa is facing difficulties in the provision of electricity and water to all its citizens. We hope to benefit from Turkish expertise in the continent,” he said. “Africa is seeking to benefit from Turkey’s strong industrial and trade power,” said Moussa Faki Mahamat, chairman of the African Union Commission.

Erdogan is seeking to triple the annual trade volume with the continent to $75 billion in the coming years. Currently, the Turkey-Africa trade volumes stand at $25 billion, having grown from $5.4 billion in 2003.