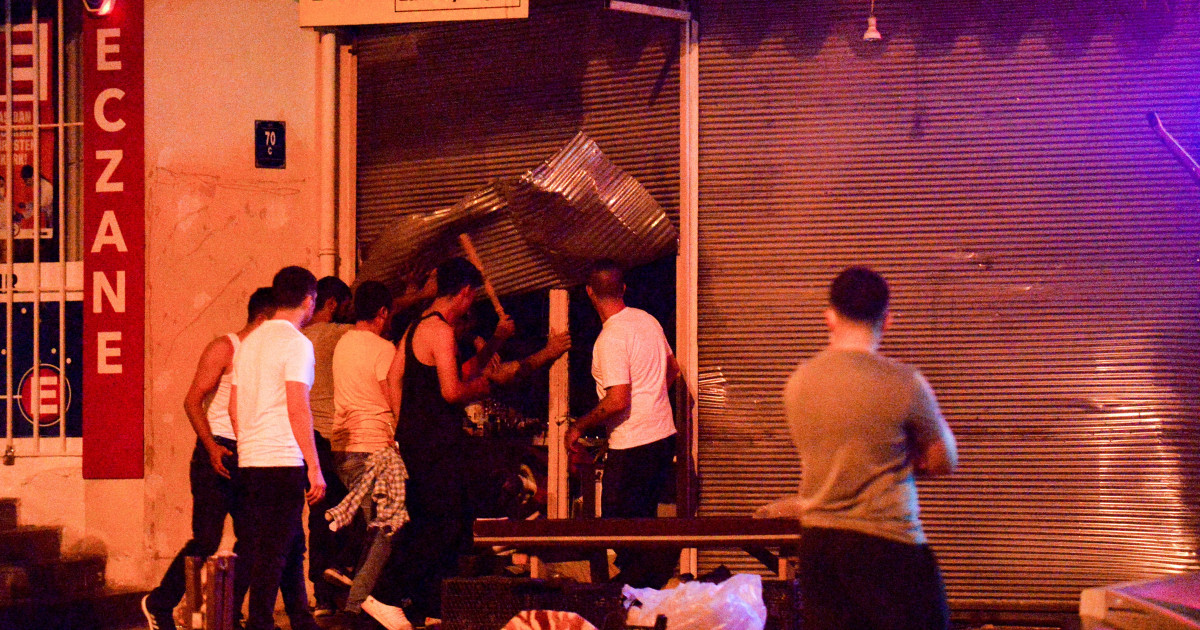 Unrest breaks out in Ankara after a Turkish national was stabbed to death in a fight between locals and migrants.

The Turkish police have detained dozens of people after a mob of angry men smashed up shops and cars believed to be belonging to Syrian migrants in the capital Ankara amid growing anti-migrant sentiments in the country that hosts 3.6 million Syrians.

The unrest broke out late on Wednesday in response to a fight between locals and migrants in which one Turkish national was stabbed to death.

Images on social media showed dozens of shouting men breaking through police cordons and then attacking cars and shops believed to be owned by Syrian families.

They smashed windows with stones and crowbars and tore down the metal grill of one store before breaking in and ransacking its shelves.

Images obtained by the AFP news agency showed police firing tear gas to disperse the crowds as the violence raged late into the night.

One showed a young man trying to break into the apartment of a building by dislodging the metal wiring of its ground floor window.

Turkish Red Crescent chief Kerem Kinik tweeted an image of a child with streams of blood running down their face who he said had been hurt in the unrest.

“When did stoning houses at night become part of our tradition?” Kinik asked.

“Many refugees contacted us. They are worried for the safety of their children. They are scared.”

The Ankara police said they had detained 76 people who were either suspected of involvement in the violence or of disseminating incendiary social media posts.

The Anadolu state news agency said two “foreign nationals” have also been arrested and charged with homicide over the deadly fight.

The unrest in Ankara comes with polls showing anti-migrant sentiments riding high among many Turks.

Turkey has become home to 3.6 million Syrians under a deal it struck with the European Union in 2016 to help avert the continent’s migrant crisis.

The sides are currently working on updating the terms.

Ankara has received billions of dollars in exchange for setting up camps in the southeast that are now home to more than four million people.

Turkey’s main opposition party last month made waves by promising to send Syrians “back home” if it came to power in a general election scheduled for 2023.

Analysts link some of the resentment to the economic instability that accelerated in Turkey with the coronavirus pandemic.

The Teyit fact-checking platform has been debunking numerous negative social media posts about migrants – many of them Afghan – this week.

The issue is gaining added attention because of sweeping gains being made by Taliban fighters in Afghanistan, with some fearing a mass exodus from the war-torn country.

Turkey is on one of the main transit routes for Afghans seeking shelter in Europe.