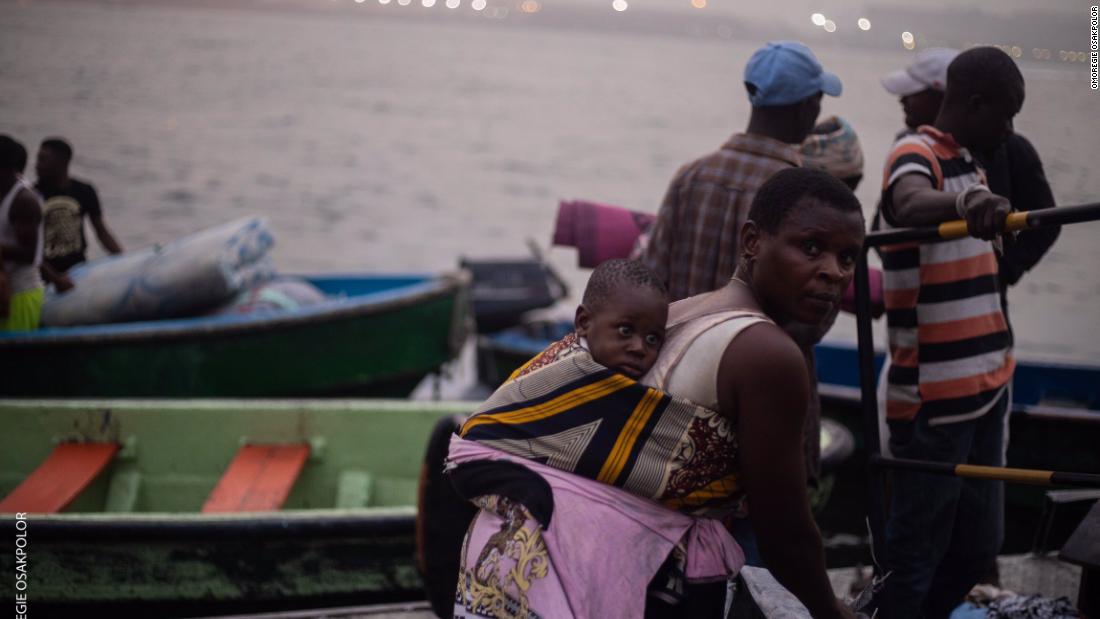 Residents described scenes of panic and confusion Tuesday as hundreds of navy personnel pushed into Tarkwa Bay and neighboring island communities on the Lagos Lagoon, ordering them to leave within an hour.

Navy Cmdr. Thomas Otuji, a spokesman for the operation launched in December, said the planned demolition of buildings aims to tackle oil theft along pipelines that run through the coastal city.

Mohammed Zanna, a resident and paralegal, told CNN that the forces shot sporadically in the air as residents, who said they had no prior notice, scrambled to find their families and pack their belongings.

“Everyone was panicking and packing everything they could carry. The men were shooting in the air and shouting that people should leave,” Zanna told CNN.

Many residents queued at the harbor till nightfall, trying to secure boats to transport their families from the island to the city, said Megan Chapman, co-director of the Justice & Empowerment Initiatives, a nonprofit that assists poor communities. She visited neighborhoods while the evictions were ongoing, Chapman said.

“We saw dozens of boats filled with belongings and families trying to see how they were going to leave the island. Most of them did not know,” Chapman said.

A consortium of advocacy groups, including JEI and the Nigeria Slum/Informal Settlement Federation, put the number of displaced persons in the thousands.

The navy’s Otuji said he did not have an exact figure of those impacted by the eviction, but residents in affected communities had been told to leave before the exercise began.

Residents were still packing their belongings out of the waterfront settlement on Wednesday, according to Zanna.

Tarkwa Bay, home to at least 4,500 people, is among dozens of communities with structures that have been marked for demolition by the navy. All are accessible only by water.

In some communities, bulldozers have already done their work.

Otuji said residents had been advised to leave in December after authorities found that the majority of homes on the islands were built along pipelines. They also discovered that some structures in the slum were being used as a disguise for crude oil theft operations, he said.

“We found at least 300 illegal spots and dug out pits where oil products were being tapped and sold illegally, even to neighboring countries,” Otuji said.

“They have been there doing all sorts of illegalities. This is dangerous for people to be living in these areas with oil pipelines. What else can we do but to make sure that we salvage the situation?” he said.

Chapman said authorities should have targeted those involved, instead of evicting innocent families in the community, mostly inhabited by fishermen and artisans.

“The law does not allow for collective punishment and summary demolition as a security measure. If there are individuals involved in these activities, what the law requires is for the individuals to be arrested and prosecuted for any crime they might have committed,” Chapman told CNN.

People living in waterfront communities in Lagos, a city of 21 million people, have been forcefully evicted in recent years by authorities citing safety concerns.
In 2016, more than 30,000 families were sent packing from Otodo Gbame, a fishing community, after state security agents allegedly destroyed their homes.

Many of them are still homeless despite a court ruling that the Lagos state government should resettle those affected by the demolition.