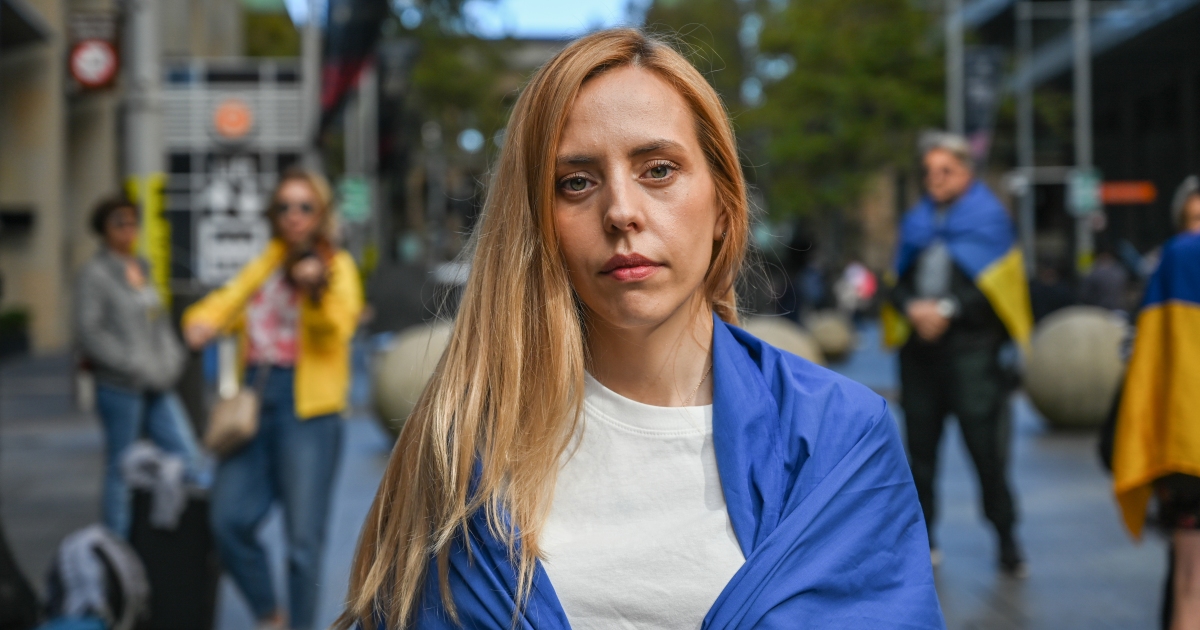 On the day Russia invaded Ukraine, 12-year-old Anastasiia was woken by two cruise missiles over the top of her house.

Anastasiia is one of the thousands of Ukrainian refugees who have sought refuge in Australia since Russia invaded their country on February 24.

Al Jazeera spoke to Anastasiia and two other Ukrainian refugees about their perilous journey to a country nearly 15,000 kilometres (9,300 miles) away.

These are their stories.

When the war began, Anastasiia was living in a small town close to Kyiv, the Ukrainian capital, with Kyrylo, her little brother, and their mother and father.

For the first few days, they did not know what to do, she said. Eventually, they hid in the basement of their building during air attacks.

“It was constant shelling and strikes so we couldn’t get anywhere and we only had food for a few days in the fridge. On day six we ran out of food,” Anastasiia told Al Jazeera, asking not to reveal her full name for her parents’ safety.

“My grandmother made some food and walked to us from quite far, it was very dangerous.”

Just over a week later, she left her town with her mother, brother, grandparents and a car full of animals. Many of the people who had fled had had to leave their pets behind.

“We took two cats, one dog, two turtles, one lizard, two ducks, two rats and one owl,” she said.

Other than that, they had only the clothes they were wearing.

Everyone was crammed into the car without seatbelts, sitting on one another’s knees, the animals in the boot.

“We feared for our lives … because around the road there were different posts (checkpoints) and people were shot dead … You could see a lot of cars with bodies,” said Anastasiia.

“We were just relying on luck,” she said. “There were a number of cars following each other and the first car got shot at but luckily no one was killed, so we changed our route,” she said.

“Our car was covered with white stripes [with writing] that it was carrying children.

“But when we were driving,” she said, “by the side of the road we saw a similar car with white stripes with a lot of blood.”

The journey was long and traumatic, but Anastasiia made it to Poland. From there, her mother bought her two children tickets to Sydney, where she had arranged for two family friends to care for them until the family could be reunited.

Neither Kyrylo nor Anastasiia had COVID-19 vaccinations, which created more challenges.

The airline refused to check in Anastasiia who had proof of a negative PCR test, which she had expected would allow her to fly to Australia.

The airline said they did not recognise the exemption, and that any unvaccinated child over the age of 12 had to be accompanied by a vaccinated adult – but Kyrylo and Anastasiia were travelling alone.

Because he was younger, Kyrylo was allowed to board.

“We didn’t have time to say goodbye,” Anastasiia said.

Weeks later – after a period in a refugee camp and with family friends – Anastasiia was finally allowed to board a flight and is now with her brother in Sydney.

Their parents have returned to Ukraine, fighting for their country, while she and her brother try to make sense of life in Australia.

On February 23 at 11pm, Antonina was on a Google Meet call with her best friend.

“We were joking literally that nothing will happen,” said the native of the eastern city of Kharkiv. “We were also joking that we didn’t pack our anxiety backpacks … with all important documents, clothes, food and so on.”

Early the following morning, she woke up to a loud bang.

“My heart was beating so strong,” she said.

Antonina and her partner Ilya took the metro to her mother and sister and gave them their cat to look after.

“They didn’t want to leave. Moreover, they continued to work. My sister was literally going under bombs just to give some products from the shop that they were working in,” she said.

In the days before the invasion, Ilya’s company had been trying to prepare for the evacuation of their staff, but the war had come later than they had expected and the details were not finalised.

The buses Antonina and Ilya had hoped for were not available.

“Suddenly one of the colleagues of my partner, she said that she has plenty of tickets for a train to the western part [of Ukraine] in an hour … it was just a coincidence, because they’ve been planning … a team-building [event],” said Antonina. “So we just … tried to enter the train under fake names … and they allowed us.”

They took the train to Drahobrat, a small ski town in the southwest of the country.

“We were stopping all the time, turning out the lights, waiting,” she said. “… We were so stressed, oh my gosh, we didn’t know what to do.”

From there, the couple travelled to Lviv. It was there they had to say goodbye.

“After that, I was on my own,” she said. “… I had to go to Poland to get a visa and buy tickets to Australia from there.”

Under Ukrainian law all men aged between 18 and 60 – with a few exceptions – face mandatory conscription, and Ilya had to stay behind and fight.

“I was so scared and frustrated that I didn’t realise what was happening. It felt like I would come back in several days,” she said.

Antonina crossed the border by bus from Lviv with two friends.

“It took us about 30 hours to cross the border. Our bus was the 40th in the queue,” she said. “Lots of volunteers [were] helping with coordinating and food. People made custom fireplaces to not die from the severe cold.

“It was snowing and [the] temperature was around -5C (23 degrees Fahrenheit). Crowds (thousands) of mothers and kids in blankets and towels standing together. They said that they had already been standing there for seven hours before we asked.”

Antonina eventually found her way to Krakow and the flat of a friend of a friend.

Before the war, Antonina had been planning to go to Switzerland to study for a master’s degree, but financial and visa issues meant she could no longer go. On a whim, she decided to apply for a scholarship to Charles Darwin University in Darwin, Australia.

“They responded [to] me with a full list of instructions. So I followed the instructions, they were ready to accept me,” she said.

She flew from Poland to Dubai, to Brisbane and finally – three days after leaving Krakow – to Darwin.

The course was not quite what she thought it would be so Antonina decided to move to Sydney to work. She wants to settle and for her partner to join her.

It was when she heard that Moldova’s borders might close that Olesia decided to leave Ukraine with her five-year-old daughter and her 16-year-old stepson.

“There were lots of rumours saying that there were too many Ukrainian refugees in Moldova already,” the 34-year-old said, “and it was rumoured that Moldova might close the border. That’s when I realised if I don’t [leave] now, then we will be trapped.”

The family is from Kyiv.

“It all started on the 24th of February at 5am. We woke up from two explosions and … then my husband told me the war had started.”

Olesia’s husband had already packed an emergency bag and later that day he left to join the front lines.

“I was scared and hurt. But to be honest, now it’s a lot worse because back then I thought it would all finish in three to five days and I would see him soon,” she said, “and now it’s [been] going on for 59 days so I’m hurting more now.”

“No one thought it would be real, in the 21st century, for war to break out like that.”

At first, she said, everyone ran down to the underground carpark when the sirens went off.

“Then, five days after the war started, I felt that I can’t do this any more,” she said. “It’s very distressing – the amount of bad news that’s coming from the screens with all the sirens going off at night and any time during the day.”

She decided to take her child and stepson and go to her mother’s house – her town seemed like it would be safer than the capital.

“The hardest part was … to actually get into the car with my child[ren] because back then it was really scary,” she said. “In your apartment or in the underground parking, you felt a bit safer but when you’re in the car you don’t know what’s going to happen.

“When we were driving, already some roads were mined, so we had to find out which roads were safer,” she said, adding that they asked friends in the territorial defence to help them plot a safer route.

“Planes [were] circling around above us … so I really didn’t know whether we were going to make it or not.”

At first, she said, she felt a lot safer, but it did not last. Olesia preferred not to share the name of the town.

She decided to leave the country. Her sister-in-law in Australia asked a friend in Romania to help Olesia and her children.

“For now, the plan is to bring back some kind of normality to the kids’ lives … for both kids to go to school, to do some activities, to get some friends,” she said. “For me, I want to get a job so that I can provide for myself … and maybe once the war is over, for everyone to go home.

“Millions of people lost their houses, their belongings, everything they had.”

Now safe in Sydney, Olesia says the world must not stop talking about what is happening in Ukraine.

“Please spread the word … We need to talk about it. We need to scream about it everywhere because we need help.”