Sudan: Hamdok – ‘Sudan’s Transitional Govt Not Authorised to Decide On Relations With Israel’ 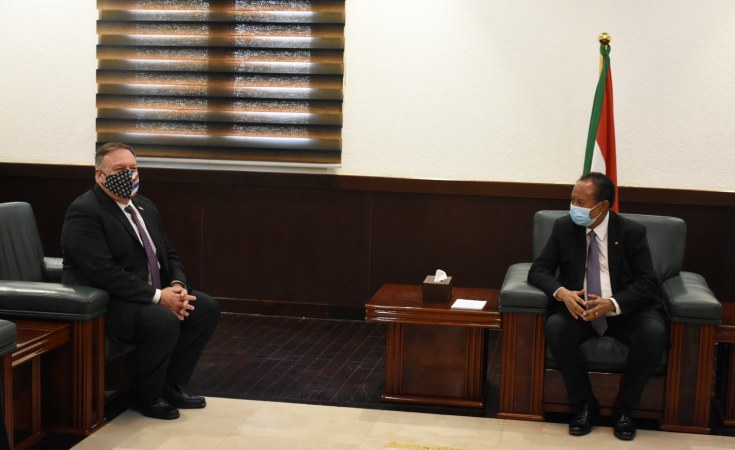 Khartoum — Sudan’s Prime Minister Abdullah Hamdok told the visiting US Secretary of State, Mike Pompeo at their meeting in Khartoum today that the transitional government is not authorised to decide on the normalisation of relations with Israel. Hamdok also affirmed government concern for protection of civilians in Darfur.

Pompeo flew from Tel Aviv to Khartoum this morning to meet with the Sudanese PM. Included in the agenda was “to discuss continued US support for the civilian-led transitional government and express support for deepening the Sudan-Israel relationship”.

Secretary Pompeo was visiting Sudan as part of a tour of the Middle East which began with talks with Israeli Prime Minister Benjamin Netanyahu in Jerusalem yesterday.

A statement this afternoon by the Sudanese Minister of Information and government spokesperson Feisal Mohamed Salih pointed out that Hamdok explained to Pompeo that the transitional period is led by wide alliance mandated with certain agenda to complete the transition, and to realise peace and stability in the country until free elections are held.

The meeting discussed the situations in Sudan, the progress of transition process and the efforts exerted for revocation of Sudan’s name from the US list of State Sponsors of Terrorism.

The US official has affirmed the US Administration’s commitment to the transition process in Sudan, peace efforts, and realisation of peace and security in Darfur and the war-affected areas, expressing concern over the protection of civilians in Darfur.

A statement by US State Dept spokesperson Morgan Ortagus confirms that “Secretary Pompeo and Gen El Burhan discussed the importance of the military’s continued support for the civilian-led transitional government and Sudan’s path toward democracy.”

Ortagus says that “the Secretary noted that the formation of the Transitional Legislative Council is a crucial step in Sudan’s transition and stressed the need for international support to strengthen the protection of civilians in Darfur.”

The statement concludes that the Secretary and Gen El Burhan discussed regional issues of mutual importance, including continued deepening of the Israel-Sudan bilateral relationship.

On August 13, Pompeo, announced that “individuals residing both inside and outside Sudan who are believed to be responsible for or complicit in, or to have engaged, directly or indirectly, in undermining Sudan’s civilian-led transitional government’s efforts to implement the July 17, 2019, Political Agreement and August 17, 2019, Constitutional Declaration” will be subject to “visa restrictions”.

According to the statement, the US believes that “Sudan’s Constitutional Declaration provides the best roadmap to begin the transition to a just, equitable, and democratic society. Unfortunately, former Bashir-era officials and others continue to undermine Sudan’s nascent democracy”.

Restrictions will be implemented under the Immigration and Nationality Act Section 212(a)(3)(C) and can include immediate family members of the individuals.

Hamdok tweeted “Delighted to receive a phone call from Mike Pompeo today to discuss further progress in delisting Sudan from the sponsors of terrorism list.”

He also said he is “looking forward to the continued support of the US administration to Sudan’s transitional government.”

Pompeo has repeatedly indicated that the State Department hopes to remove the designation, which severely impedes investment to Sudan, but disputes have arisen on a compensation package over the 1998 bombings* of two US embassies.

* As reported by Radio Dabanga in June, according to US Secretary of State Mike Pompeo, an agreement with the Sudanese government on the victims of the 1998 bombings of the American embassies in Kenya and Tanzania, would be reached in the coming weeks.

“We are working on a positive solution for Sudan’s new leadership and the Sudanese people,” Pompeo told the US-backed Al Hurra news station in an interview on Wednesday.