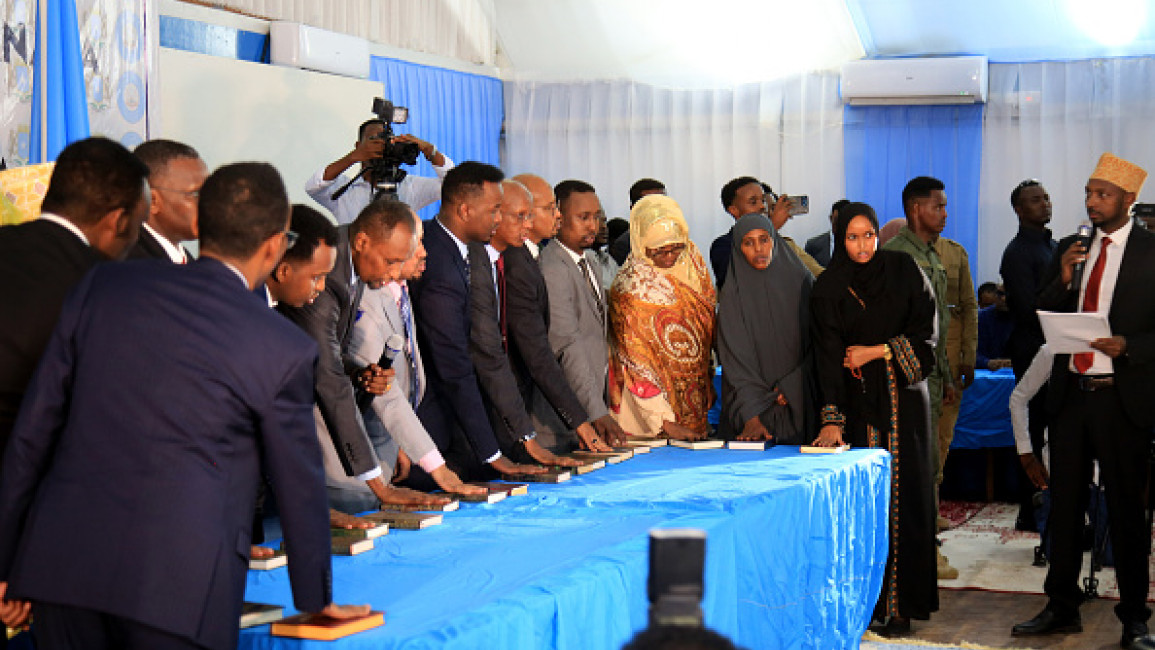 The elections in Somalia, which are already one year behind schedule, follow a complex indirect model, whereby state legislatures and clan delegates pick lawmakers for the national parliament, who in turn choose the president.
Share

Somalia is on its way to electing a president following a year-long delay [Getty]
Somalia’s newly elected parliament convened for the first time on Saturday, bringing the war-ravaged nation a step closer to completing the drawn-out process of appointing a new president.

Elections in Somalia follow a complex indirect model, whereby state legislatures and clan delegates pick lawmakers for the national parliament, who in turn choose the president.

Nearly 300 lawmakers were sworn in Thursday- already more than a year behind schedule- after a chaotic voting process that has been undermined by deadly violence and a power struggle between the current president and the prime minister.

International partners- including the United Nations, the African Union mission in Somalia, the European Union and a host of foreign governments- have welcomed the development.

Saturday’s parliamentary session set the ball rolling for the election of speakers for the lower and upper houses before they sit to choose a new president.

A date for choosing the new president has yet to be set.

The parliamentary elections should have been completed before President Mohamed Abdullahi Mohamed’s term expired in February 2021.

But political infighting stymied the process and the president’s mandate expired without a vote taking place.

Mohamed, better known as Farmajo, tried to extend his rule by decree but faced protests and violent opposition in Mogadishu, where rival political factions fought on the streets.

Under pressure from the international community, he appointed Prime Minister Mohamed Hussein Roble to seek consensus on a way forward but disagreements between the two men hindered progress.

The bitter spat between Roble and Farmajo stoked fears of further instability in the Horn of Africa country, which is battling a decade-long Islamist insurgency and the threat of famine.

Some parliamentary seats still remain unfilled but sufficient lawmakers have been sworn in to move the election process forward. So far, 298 legislators have taken the oath of office, from a possible 329 members for both houses.

Somalia has not held a one-person, one-vote election in 50 years.