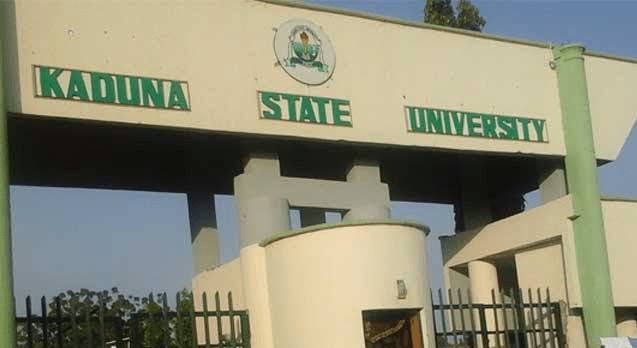 The Kaduna State University (KASU), on Wednesday descended on one of its academic staff, Mr Bala Umar, popularly known as A.B. Umar, for allegedly soliciting sex for grade.

In a management meeting on Wednesday, KASU said a committee was set up to investigate the allegations against Umar, following a one-man protest at KASU by a female graduate of Ahmadu Bello University (ABU), Zaria.

The lady, whose name was not given, alleged that Umar, who was sacked by ABU for sexual misconduct and later employed by KASU, was not fit to be a lecturer in any institution.

KASU’s Deputy Vice Chancellor (DVC), Academics, Prof. Abdullahi Ashafa, who chaired the meeting, said KASU had zero tolerance for such misconduct by its members of staff and would deal appropriately with anyone found wanting.

Ashafa said the university was therefore proceeding with investigations on the allegations leveled against Umar.

“This is a normal management meeting that holds every week as mandated by the Institution’s management to receive reports from faculties, directorates and units of the university.

“Sometimes in the first week of October, a lady who was an ex-student of ABU twitted that a former staff of the institution who is employed by KASU, had sexually harassed her when he was a staff at ABU.

“She mentioned his name and the vice chancellor of KASU quickly formed a committee to investigate the issue, not only to clear its name, but to reassure parents and students who are studying here or intend to study of their safety.

“KASU is building a reputable name as a centre of excellence, so such allegations need to be investigated and cleared.

“The incident did not occur in KASU, but the way the issue is being portrayed is like we are providing a safe haven for those whose appointments had been terminated elsewhere.

“Umar was appointed in error; there was no much investigation to ascertain what made him leave ABU at the age of 54.

Ashafa disclosed that two committees were set up; one was to investigate Umar’s case, while the second was for general investigation on events on campus relating to both academic and non-academic employees of the institution.

“The second committee is to also collect testimonies and memoranda from past and current students who are victims of such misconduct; and who are willing to share their experiences.

“The university is interested in unraveling such incidences that have not come to light; and would take drastic measures to serve as deterrence to would be offenders,’’ he said.

The DVC assured that though Umar was a management staff, he had been summarily suspended for proper investigation.

“If found guilty of tarnishing the image of the university, he will be queried, suspended and placed on half salary, then the reports and other decisions will be tabled before the university council for final decision.

Prof. Hauwa Evelin-Yusuf, of the Sociology Department, who chaired the first committee, said that members were to investigate the appointment of Umar, as well as the reasons he left ABU, and make recommendations.

“ABU terminated Umar’s appointment on misconduct bordering on extortion of students in July 2013 and KASU absorbed him in September 2013.

“Our findings showed that Umar should have been employed on contract basis if his services were needed because he has no PHD and was 54 years at that time.

“We also discovered some discrepancies in his submission and that of some students that were interviewed, there were allegations of unethical behaviours and sexual advances.

“There were no evidences to substantiate the allegations, though there were students whose names were mentioned.

“Further investigation should also be carried in a twist in the case when a student came into the university vicinity carrying a placard that she was a victim.

“We cannot identify the lady, but we have her picture and we need to look for her, know who she is and to ascertain if she is a student of KASU or ABU, we do not have that information.

“This is why we recommend another committee because this other issue came after our reports have been concluded,’’ she said.

Evelin-Yusuf’s committee recommended that Umar’s appointment be converted to contract with immediate effect; and the university could take further decisions.

She called on Nigerian students to be bold and report all forms of extortion, harassment or unethical behaviours by lecturers that were capable of tarnishing their future and the reputation of Nigerian universities. (NAN)